Nothing makes sense. The world is pretty awful. Nevertheless it's another pretty Indian Summer week in San Francisco, and we are muddling through. Should you need to get out of the house and/or off your phone and away from the news for an hour or two this week, here are a few ideas for where to go.

SALSA DANCE LESSON: It's Latin Vibe Tuesdays at Bar Fluxus, and that means a beginners salsa dancing lesson at 8 p.m., followed by live Latin music from VibraSON, and DJs. The class is taught by SalsabyJake, who was resident instructor at Cafe Cocomo for over 10 years. Also, do note that this place has good cocktails. Bar Fluxus, 18 Harlan Place (near Bush and Grant), 8 p.m. $8


MODERN PSYCHEDELIC FOLK ROCK: Kacy & Clayton, a talented young duo from Saskatchewan ranch country just north of the Montana border, come to Cafe du Nord tonight to bring their unique brand of country-tinged, kind of 60s-sounding folk rock to this intimate venue. The pair are cousins, and they say "Lots of our songs are inspired by old stories from our family." Cafe Du Nord, 2174 Market Street near Sanchez, doors at 7:30 p.m., $15 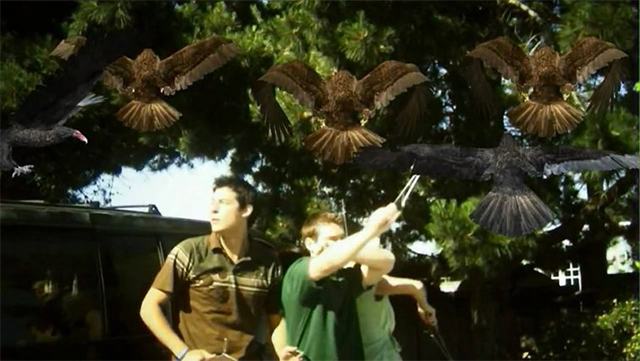 B-MOVIE VERSION OF 'THE BIRDS': This week's Weird Wednesdays feature at Alamo Drafthouse is from not so long ago, 2010, and Vietnamese-American filmmaker James Nguyen. Birdemic: Shock and Terror, as Alamo puts it, is "the most discussed and analyzed avian disaster film since The Birds," and like The Birds it involves a Northern California town besieged by homicidal birds. It also has some kind of love story involving a lingerie model, so you get the picture... Alamo Drafthouse New Mission, 2550 Mission Street, 10:15 p.m., $6

BUFFY THE VAMPIRE SLAYER, LIVE!: It's time for some all new episodes of Buffy The Vampire Slayer, the supernatural-themed but campy 90s TV show, restaged with extra camp, in drag, at Oasis. Performances will be ongoing throughout the month, Thursday through Saturday, ending with a special Tuesday performance on Halloween night. Oasis, 298 11th Street, 8 p.m., $25 - find tickets here

DOG RESCUE BENEFIT FEAT. EMMYLOU HARRIS: Just ahead of their performances for Hardly Strictly Bluegrass, Emmylou Harris and Steve Earle will be headlining Bummer's Ball, a fundraiser for Rocket Dog Rescue on the Upper Floor at the Armory. It's named for Bummer of Bummer and Lazarus, arguably SF's most famous stray dogs, and legendary pals with Emperor Norton. This also marks a bit of a first The Armory as a venue, given that most of the concerts held here so far have been of the electronic/dance music variety  and this is going to be an especially intimate one in the Upper Floor space, not in the Drill Court. The Armory, 1800 Mission Street at 14th, 7 p.m., $100-$250 (GA tickets include one drink)

FLEET WEEK AIR SHOW & PARADE OF SHIPS: It's once again time to celebrate the military! You'll be hearing the Blue Angels criss-crossing the city all weekend long starting on Friday afternoon, which could make for some annoying conflicts with Hardly Strictly Bluegrass. And starting Friday morning you can head out to Crissy Field or the Golden Gate Bridge to watch the Parade of Ships, which will include the USS ESSEX (LHD 2), USS DEWEY (DDG 105), USCGC MIDGETT (WHEC 726), HMCS WINNIPED (PPH 338) and the USACE MV JOHN A.B. DILLARD. Crissy Field and Marina Green, ship parade starts at 10:30 a.m. and air show starts at noon, free

CONOR OBERST AND FRIENDS: Friday is always the most manageable day to deal with Hardly Strictly Bluegrass, given that people aren't necessarily skipping out on work for the free festival, and this is also the day that singer-songwriter Conor Oberst (once upon a time known as Bright Eyes) is curating and performing on the Rooster Stage. He goes on at 5:45, but opening for him will be Big Thief at 2:10, the Felice Brothers at 3:20, and Americana-obsessed Swedish folk sister act First Aid Kit at 4:30. Marx Meadow, Golden Gate Park, music starts at noon, free

DOPE LATE-NIGHT DANCE PARTY: DJs Kenny Dope, David Harness, and Joey Alaniz will be bringing the beats to Halcyon Saturday  where they have that all-night license, though this party is supposed to wrap up at 4 a.m. Kenny Dope, along with Mike Delgado, once went under the name Masters At Work, and he's done remixes for everyone from R. Kelly and Shirley Bassey to Kanye West. And Harness, of course, is a local legend. Halcyon, 314 11th Street, 10 p.m. to 4 a.m., $10-$20, free before 11 p.m.

MEDICINAL/HERBALIST COOKING CLASS: If you've ever wanted to know how to incorporate more medicinal herbs and mushrooms into your cooking repertoire, join ethnobotanist and clinical herbalist Elizabeth Howe and certified herbalist Sarah Jane Fairless for this class in which you'll learn how to make immune-boosting vinegars, golden milk base, and herb-infused energy balls. Snacks provided. 18 Reasons, 3674 18th Street, 4 p.m. to 7 p.m., $50

CHEAP TRICK & EMMYLOU HARRIS: Golden Gate Park will no doubt be packed Sunday, but if you get yourself out there in time to snag some blanket space and you're able to commit to one stage over an other, you're likely to have a relaxing good time  though good luck getting to the bathrooms during the headline sets. Those include pop legends Cheap Trick, whose set only barely overlaps with perennial headliner Emmylou Harris. Lindley Meadow and Hellman Hollow, Golden Gate Park, noon to 7 p.m., free

Following news that San Francisco is working to implement a new plan to help combat homelessness, Oakland is now debating whether to declare their own shelter crisis. Oakland North reports that the city

Immediately following the first announcements that a terrorist had opened fire on Las Vegas concert-goers, people took to the internet for answers. Instead, what they found was Google and Facebook turning up some