A new, long-awaited, high-end boutique hotel at Seventh and Market is officially open for guests, bringing another potential catalyst for change in the always colorful environs of Mid-Market. Proper Hotel, from the newish brand known as Proper Hospitality, has been in the works for over four years now in the former Renoir Hotel at 1100 Market Street, and it comes with interior design by respected LA designer Kelly Wearstler, a ground-floor restaurant from a James Beard-nominated chef, and not-yet-open rooftop lounge that will become the main draw for this place as far as the local public is concerned, if I had to guess.

Open today is Villon, the ambitious sounding restaurant off the lobby from chef Jason Franey  whose career has taken him through some very high-end, Michelin-starred kitchens, including Eleven Madison Park in New York, and Seattle's Canlis. He was most recently heading up Restaurant 1833 in Monterey, where Michael Bauer raved in 2015 about the "stellar" menu.

It doesn't look like the menu is live online just yet, but as this is a hotel the restaurant will be open for breakfast, afternoon snacks, and dinner, and soon it will also be joined by La Bande, an all-day cafe featuring pastry, coffee, sandwiches, and such, located in the tip of the flatiron space at the ground floor, where McAllister and Jones hit Market Street. 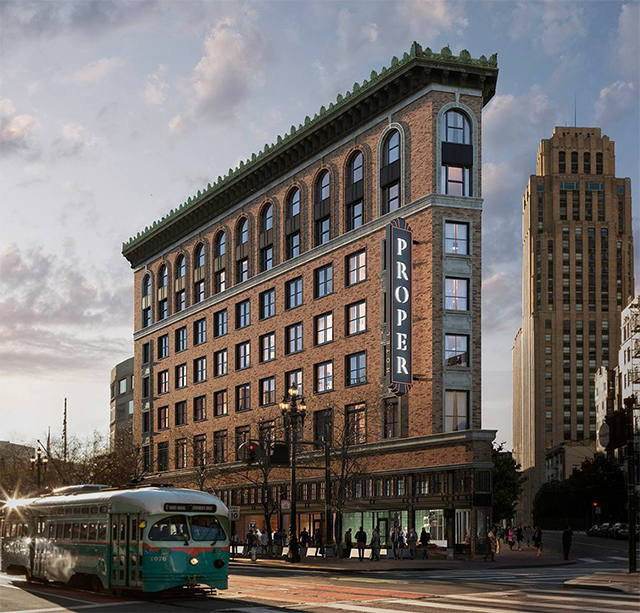 Also to come, with no opening date yet announced, is Charmaine's, the rooftop bar and lounge which will have its own separate drink and snack menu, as well as "highball service" (which I believe is just their way of saying "bottle service").

The drink situation is all being overseen by BV Hospitality, a.k.a. Josh Harris and Morgan Schick of the Bon Vivants and Trick Dog. (Some may recall, before the renovations began a few years back, they had a short-lived bar on the ground floor here called Rio Grande.) For Villon, they've created a menu of 49 drinks representing SF's 7x7 square miles, featuring seven thematic sections with seven cocktails each, in addition to locally sourced beer and wine.

The rooms at this new hotel, on one of the most traditionally chaotic stretches of street in the city and adjacent to an open-air black market for drugs and pilfered goods (in UN Plaza), appear to start at around $400 per night, with a "bunk room" option that does not yet appear available on the website.

Concierge and room service are available via the Proper app, accessible on your phone or tablet, and there's a gym and bicycles available for free use as well.

Per a release, "Each Proper experience is an ode to its city, and in this case, San Francisco serves as the hotel's muse... A hotel long forgotten, burned, and rebuilt, poised to reclaim its status as a culturally connected hangout for next generation bon vivants."

Stay tuned for details about that rooftop, and you can get a reservation at Villon here.