Some more anti-Facebook LGBTQ outrage erupted late last week when the GLBT Historical Society had a totally safe-for-work, entirely tame ad they wanted to post seeking volunteers for their booth at this weekend's Folsom Street Fair rejected by Facebook as violating their advertising policies. The ad, which you can see above, shows several shirtless men, one of whom is smoking a cigar, saying "We Need You" and reaching out for volunteers. The society's executive director, Terry Beswick, tells Hoodline that he was baffled by the rejection by Facebook censors, and he said that the society had posted a similar but even racier ad for volunteers for the Dore Alley fair in July without any problem.

Facebook, naturally, reversed themselves and decided to allow the ad over the weekend, telling Hoodline, "Upon closer review we've decided that the ad doesn't violate our policies and it's been approved. We apologize for this error."

Below, the initial rejection, after which Beswick responded saying, "What is this, the 1800s?" 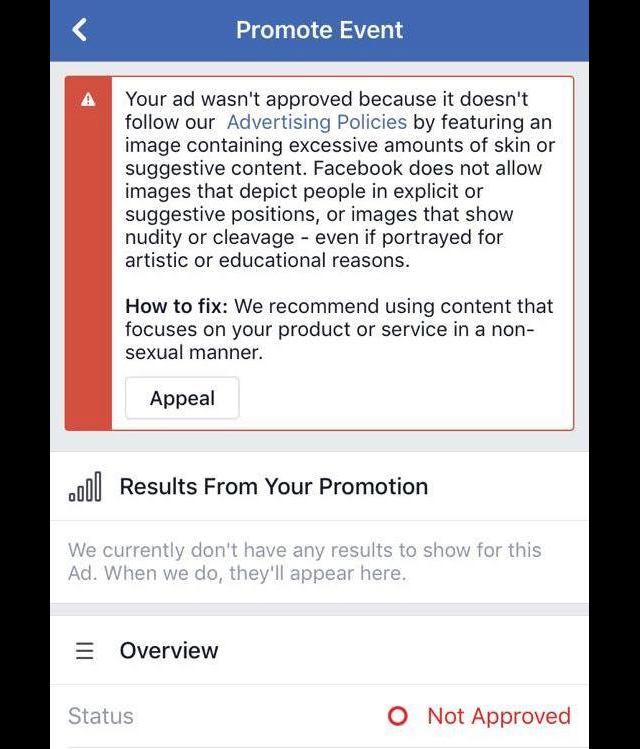 It appears that even Folsom Street Events had to deal with a bit of push-back from Facebook's censors this year.

Their original header image for the event page looked like this:

And that's since been swapped out for a "censored" one with less butt showing.

This hubbub of course follows on a few years of bristling from LGBTQ folks about Facebook's tone-deafness or insensitivity when it comes to dealing with such photo monitoring, as well as the company's arguably anti-LGBT policy, less stringently enforced of late, that requires users to use their "real names," i.e. names that they can prove with official identification, on their accounts. This was a major point of contention that was called out in particular among SF's drag community in 2014, and was sort of resolved by late 2015 with a promise about more "human monitoring" of real-name enforcement.

I've been thinking how best to talk about what I experienced Sunday at Chapter II of Taylor Mac's irreverently epic, hard-to-describe, "performance art concert" called A 24-Decade History Of Popular Music. It is

Much like there were thousands of shelter pets that needed to be relocated following the massive flooding with Hurricane Harvey in and around Houston, there are tons of four-legged friends that needed relocation