In honor of Muni Heritage Weekend, which is this weekend  this will explain why you're seeing so many vintage streetcars and other vehicles around  we're revisiting SFist's favorite Muni lines — not necessarily to get where we're going, but the ones on which we most find ourselves enjoying the ride, because of the above-ground scenery. While she's an easy target to kick with her many flaws and breakdowns, Muni deserves some love sometimes too.

22-Fillmore
You get the full socioeconomic spectrum of San Francisco on this iconic Muni route, from the east-of-Bayshore Bayview neighborhood to its final stops in the Marina. Yes, the 22 is a crazy-person bus with tagged-to-the-bejesus interiors and it's unbearable when the kids are getting in and out of school. But this bus has left its imprimatur on so many of your favorite local memories and deserves inclusion not least of all for sentimental purposes. The San Francisco Bay view from the top of Broadway never fails to make one gasp. — Joe Kukura 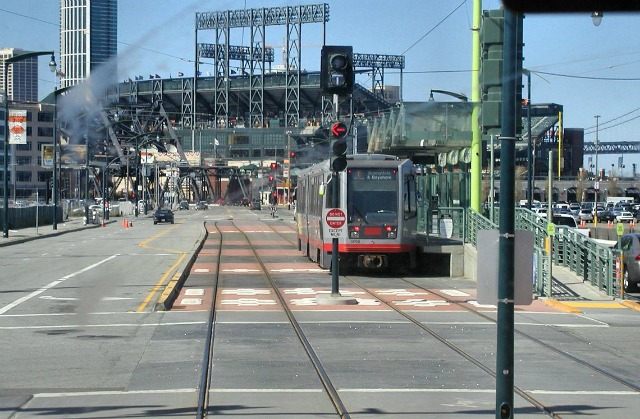 K-Ingleside/T-Third Street
There are a lot of things to love about the KT, from the fun trip it takes you down a still quirky Ocean Avenue to the swift and oftentimes-less-packed alternative it offers travelers within the city. But my favorite thing about the T is when you're heading back from the Bayview towards SoMa, how as you take the turn into Mission Bay, the ballpark suddenly rises up in your window. I don't know why, but even though I take that trip on a weekly basis, that moment gives me one those "I can't believe I get to live here" chills every time. — Eve Batey

33-Ashbury/18th
Sometimes, Muni drivers are nothing short of heroic. And when the 33 headed from the Mission makes that huge, sweeping turn off Market Street and onto Clayton, toward Ashbury Heights (opposite direction of video) with the front of the bus nearly kissing a cement wall, I could kiss the driver. The 33 is also the first bus I took regularly in San Francisco when I lived on Ashbury for a few months in '07, so you better believe it's a sentimental journey. —Caleb Pershan 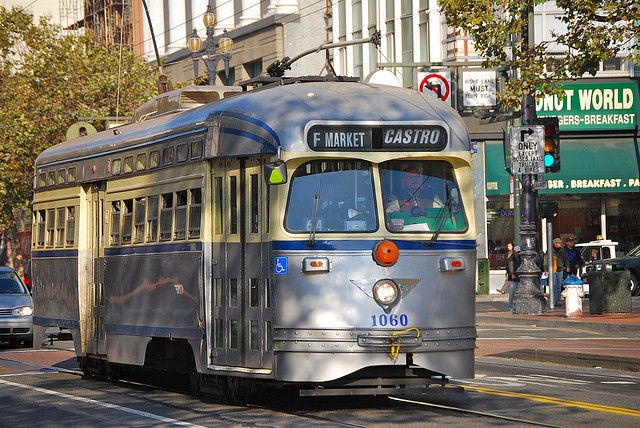 F-Market
The Muni line perhaps most loved by tourists and most despised by locals is the F, with its array of historic streetcars from around the world  the most hateful, of course, being the rickety, rattly, old and loud orange ones from Milan. But you have to admit they add some charm and color to the Market Street scene, and that open-topped boat car they pull out on sunny days is just the best. Also, in addition to the cross-section of the city one can see riding the F all the way up Market to Castro, the full route includes much of the Embarcadero too, with views of the Bay and a bevy of tourists who don't know which way the Ferry Building is. Also, until the Central Subway is completed and extended, this is actually one of the quicker ways to get to Fisherman's Wharf via public transportation, like it or not.  Jay Barmann 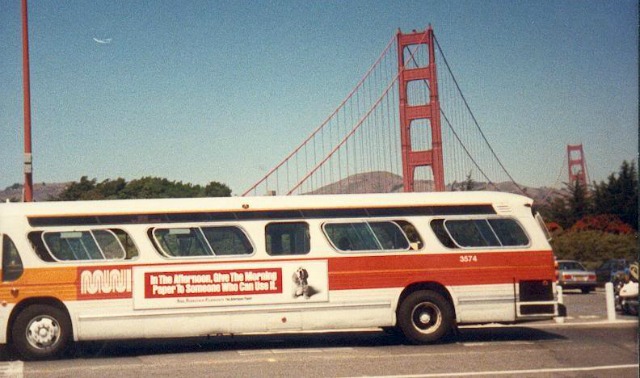 28-19th Avenue
Look, I can't lie: 19th Avenue is a hellish shitshow. I don't care if you're a driver, a transit rider, or a pedestrian crossing the road just hoping neither of those other things squash you like a bug. That stretch of the 28 is more of a gruesome necessity than a pleasure, but once you get north of Golden Gate Park, it turns into a fun and lovely ride through some of the Richmond's cutest architecture, then suddenly you're at the Golden Gate Bridge, then heading through the sexy new Doyle Drive. That section comes damn close to making the other, crappier parts of route worthwhile. — Eve Batey 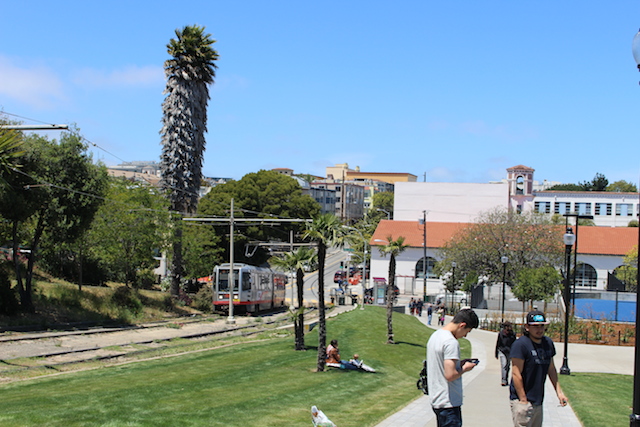 J-Church
There's a lot to say about this line that runs through Dolores Park and rambles around backyards in Noe, but I'll instead just quote from Thom Gunn, whose poetry of witness during the AIDS epidemic is startlingly, heartbreaking good. —Caleb Pershan


Last year I used to ride the J CHURCH Line,
Climbing between small yards recessed with vine -
Their ordered privacy, their plots of flowers
Like blameless lives we might imagine ours.
Most trees were cut back, but some brushed the car
Before it swung round to the street once more 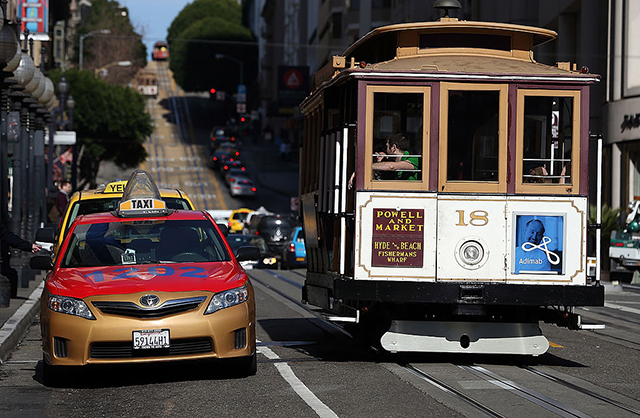 Hyde Street Cable Car
If you have parents or tourist pals in town who don't want to deal with crowds, you may want the California Street line to give them their first cable car experience. But on an off-hour, or if you can manage to get on along the route without too much trouble, try for a ride on the Powell-Hyde Line  particularly the portion after Nob Hill when it snakes up through Chinatown and over to Hyde, and then makes the very pretty journey through Russian Hill down to the water. Just make sure to get on the one that says Hyde on it, not the Powell-Mason.  Jay Barmann 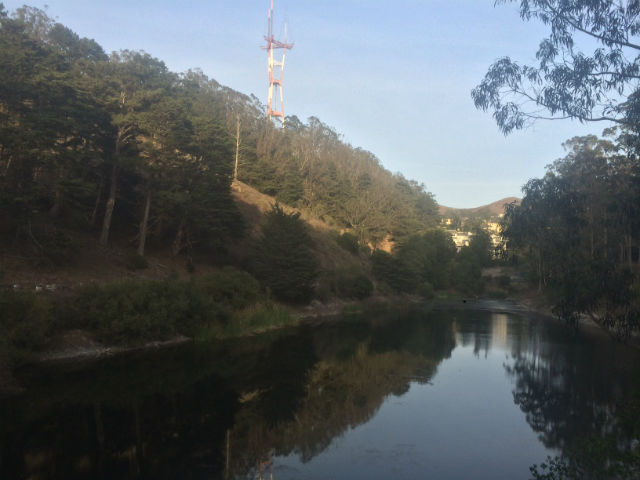 43-Masonic
Despite its name, the 43 Masonic is only on Masonic Ave. for 7 of its 89 scheduled stops. Known to most as a “Haight St. bus”, the 43 Masonic is actually a critical connector for unfashionable and less-trafficked neighborhoods like the Excelsior, the Portola District, Forest Hill, Laguna Honda (seen above) and the Presidio. Some of the 43’s stops aren’t even cross-streets, they’re just random arbitrary addresses. The winding route and tiny residential streets of the 43 Masonic’s path make it not a particularly time-effective route, but available seats are generally plentiful, the buses are usually clean, and there is an adorable Clancy’s Pumpkin Patch hidden at 7th Ave. & Lawton should you want to score a jack-o-lantern this Halloween season. — Joe Kukura 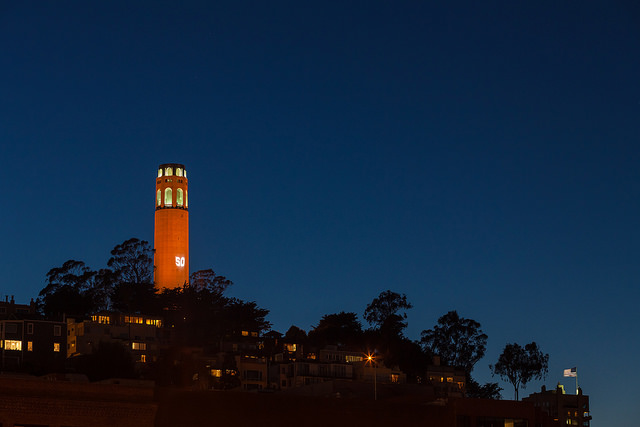 The Coit bus will take you allll the way up here. Photo: Super Bowl 50

39-Coit
For most San Franciscans, the 39-Coit isn't the route they take to get to work, school, or other obligations. It's the ride they take when they're showing SF off to guests, or are playing tourist in their own town. That, alone, makes it more fun than our utility-driven routes, but it's also a beautiful ride, heading up Telegraph Hill to Coit Tower (hence the name), past Washington Square, and down one of the prettiest stretches of Powell. Every time I ride the 39, I think "why don't I do this more often?" before remembering that I always have shit to do. But this is one Muni ride that merits a pause from the daily grind, a stashing of the phone, and a window seat. — Eve Batey 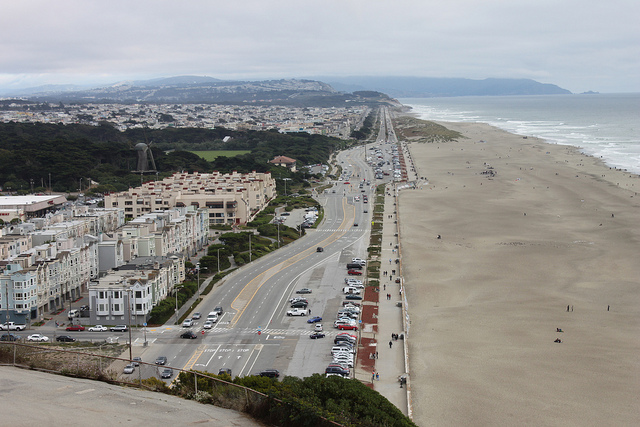 18-46th Ave.
The 18 46th Ave. is a zen ride thanks to very few passengers, the comfy and stylish biodiesel model Muni buses, and a spectacular array of San Francisco scenery. Though it no longer does the full loop around Lake Merced (that distinction now goes to the 57 Parkmerced), the 18 46th is the only Muni route that travels the Great Highway, plus it also passes the Dutch Windmills and goes right to the Legion of Honor. It’s a Muni ride so quaint you could take a date or visiting family on it without shame. But be aware that on weekdays the 18 can get suddenly mobbed with children taking field trips to the SF Zoo, which it also glides by. — Joe Kukura

The T-Third as it heads toward AT&T Park. Photo: Palter.org

In 30 days, we go on tour in the South. We’re adding more security to keep safe - can you donate to help? Donate: https://t.co/vKK4P2QdmT pic.twitter.com/t0w1S9MbqT—

Wednesday was a hell of a day for the Oakland Police and Fire Departments, as today we have separate reports of disturbing DUI and child pornography charges for officers from both organizations. While