Frankenstein, by Libby Larsen is an opera in fifteen scenes based on the well known Mary Shelley story: Victor Frankenstein in his lab, possessed with the hubristic desire to create life, animates a monster. Who, it turns out, is seriously homicidal. Victor has second thoughts, to put it mildly, after the monster offs all his other family cast members. Appropriately enough, this show is produced to bring life into the empty shell of a monster warehouse of Pacific Pipes in the Oakland flats, where the restrooms are branded by Honey Bucket. It's surprisingly well suited for the show, comfortable even. The only discomfort is the (retrospectively unwarranted) feeling that you will find your car stripped and sitting on cinder blocks after the performance; and the hangar doors that remain open throughout prove a bit drafty. The presenting company, West Edge Opera, lives up to the edginess proclaimed in its name. They have used a disaffected train station in the past, and they do score points on the Burning Man scale for risk taking and appropriating unusual venues for art.

Rather than extending a season over the whole year, they put together a summer festival for 2017. This year as in the past, the other two rarely heard operas, Ambroise Thomas's Hamlet and Vicente Martin y Soler's The Chastity Tree (based on a libretto by Mozart's collaborator Lorenzo Da Ponte), also push the boundaries of programming towards the edgy and adventurous. You can see the concluding performances of the festival this weekend.

Back to Victor, who creates the monster using the energy of lightning. He must also harvest that energy to power the DeLorean like Doc and Marty, as his future self comes back to either haunt him or warn him, but not before it's too late. Still, Victor 1 and Victor 2 get some nice duets together without collapsing the fabric of space and time. 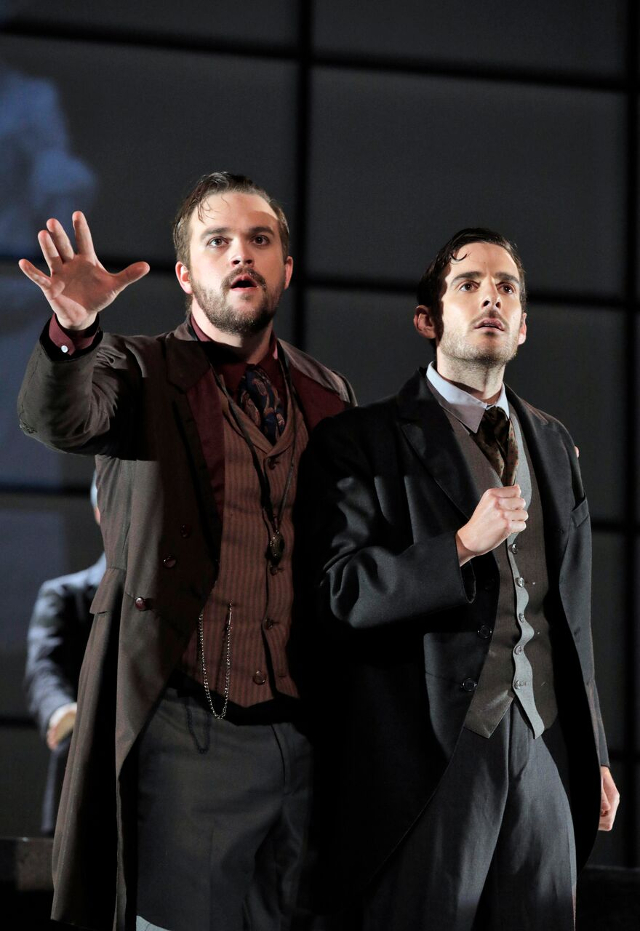 It's a short opera, clocking in at ninety minutes, and it moves apace briskly. There is a single basic set (directed by Matthew Ozawa), with large video projections and lightings (including on stage neon tubes) to change location in a blink, from a ship in the present to a library or a lab in the past. The score has a pleasant modern feel, the nowadays typical percussive atonal atmosphere with a few lyrical interventions. A children tune comes in during William's death scene, and the orchestra mimics a music box as background to a mechanical toy, to bring in some melodic familiarity. The two percussionists (Joel Davel and Kevin Neuhoff) do a bang up job. The orchestra is on the smallish side, with only a string quartet, but boosted up by amplification and eletronics.

The cast is impressive, from the sonorous Captain Walton (Josh Quinn) to Victor 1, an energetic Sam Levine. Rowan Whitney had an ethereal voice as the child, but was not heard enough through the orchestra. Chelsea Hollow as Victor's wife Elizabeth gets one lyrical aria that she hits out of the warehouse. Jonathan Khuner conducted with a steady hand, which involved a lot of counting and precision.

There are plenty of neat ideas in the score. Victor extolls creation, and at the beginning, speaks a line until the music surges on his last word, "life," as if music was life itself. And the monster gets created during a ferocious cello cadenza (a heroic performance of Leighton Fong). There are a few duds as well: Some rather emotional scenes (William's death, or the monster's birth) lack raw emotional power, the music does not find another gear there. The monster does not speak (even though the provided synopsis assures the audience he has learned) and his mute expressiveness is rather limited. It's conceptually interesting to express his language as exclusively instrumental, but a challenge in practice. The supertitles translate for us, but without singing cues, I wasn't sure when to look up. 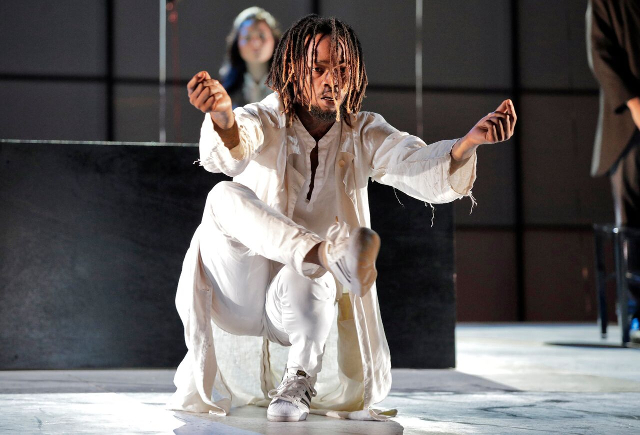 To compensate for this, the production cast the monster as a Turf dancer, Oakland's own Gary Morgan. I had no idea what Turf was, and while impressive, some of the moves look awfully painful on the shoulders. Morgan sure can moonwalk. It's a nice departure from the awkward motion of, say, Boris Karloff's iconic monster. On paper, it sounds like a good idea. In practice, it's quite tone deaf. The monster's choreographic language does not evolve much, and does not express very well the monster's longing for companionship which sends him on a murderous revenge. If only he could sing and be given an aching lament right there!

But mostly, the monster is a black guy, and the rest of the cast is white. That last sentence should have given the production team a pause. It feels like a scene out of Get Out except unironic. Just to make it a bit more misguided, while the monster is created, a giant neon tube sticks up as phallic symbol. Sexualized and dangerous, a twofer. Falling flat is the risk you take for living on the (West) edge. You still must salute the company for taking on the challenge.

Proving good things come in small packages. It's usually hard to believe that you can get crisp, beautiful surround sound audio from two speakers the size of iPhones — but that's exactly what you