Last week we broke the news of the likely permanent name change for the annual Halloween party known as Ghost Ship, which this year is being called LoveBoat Halloween after the unrelated fire in Oakland in December at a warehouse space also called Ghost Ship. Today, tickets go on sale for what will be the final Pier 70 for the party's promoters, as Pier 70 is slated for development in the near future. And because the future is thus uncertain for the Halloween event, organizers decided to go after two "bucket list" headliners for 2017, and they are... Fatboy Slim and Moby.

"There's uncertainty going into next year," says promoter Robbie Kowal, as this will be the 10th annual iteration of a party that's grown quite large since moving to Pier 70 four years ago. "We'll have to find a new venue and who knows if it will ever be at this scale again. So we're doing the party the way we've always wanted to, throwing it as if it's our last two nights on earth."

Kowal says that when he told the team earlier this year that he wanted to book Fatboy Slim and Moby, everyone laughed and said "Good luck." But he says, "Both of them looked at the event and said 'God, that looks like a lot of fun.'" And he says that Moby himself came to SF to help throw a fundraiser for victims of the Ghost Ship fire in December  which though unrelated to the party and its promoters, had overlap with the electronic music community who form a big part of the Ghost Ship Halloween audience. 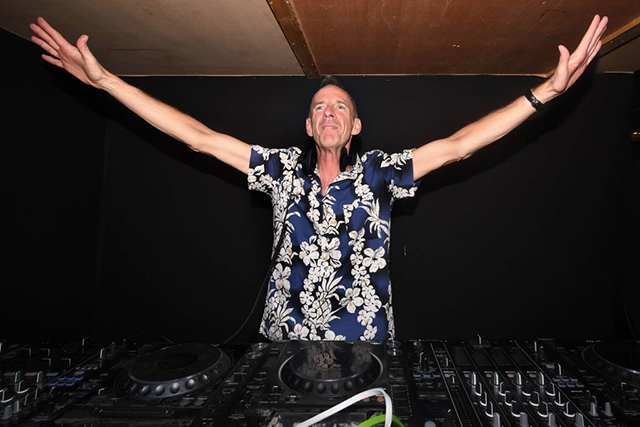 "Having the theme this year be something positive and happy and having artists of this caliber, it's how we'd want to go out," Kowal says, adding that Fatboy Slim and Moby are two of the most important dance music artists all time, and beloved to the Burners who form the party's core audience. "I doubt there are any other two artists whose music has been played more out on the playa than these two."

The massive, two-night event will have about 70 other DJs involved as well as a bevy of artists creating large-scale, Burning Man-style installations, but today's announcement is only about the headliners as two-day tickets go on sale starting at $110 for early birds. Single-night tickets will go on sale at a later date. Fatboy Slim will headline Friday's party on October 27, and Moby will DJ Saturday, October 28.

"The Ghost Ship Halloween community has always been very supportive of artists who aren't necessary traditional headliners," Kowal says. "People like James Lovell from UNCLE and The Orb, and they hardly make wave any more. But the scenes that this party grew out of like Spaceship Cowboys, and the people who used to break into warehouses to throw raves, those are the people who put this party together. And Fatboy Slim and Moby have always been high up in the pantheon for us."

One notable difference this year is that there will be no VIP tickets or VIP area, and Kowal says that's on purpose. This is in part because the structure of the building changed, and some balconies that were installed in the Pier 70 warehouse for the Super Bowl have since been removed  because they were there and organizers wanted to use them, they decided to create a VIP lounge there.

"It's not in our DNA to have VIP at Ghost Ship," he says. "We did it for a couple years because of those balconies, but it's not something that we were ever totally comfortable with. The ethos of our community is very egalitarian. This isn't a bottle service kind of vibe. Ghost Ship represents the last throes of the rave culture, and the idea of a VIP area is just kind of antithetical to what we're about."

Kowal laments what he calls "the Vegas-i-zation of dance music culture," where more and more parties and clubs emulate the stratified experiences of Las Vegas venues where the club real estate is parceled out and people pay more to be closer to the stage, etc. "I hate clubs like that. They give me hives," he says. And as they say on the LoveBoat website, "Love can't be held back by velvet ropes."

Perhaps in a bid at strengthening customer loyalty, Uber is going to be launching its own co-branded credit card later this year in partnership with Barclays. Barclays made the announcement via the Associated

A man who was vandalizing a sign at a Union Square intersection didn't take kindly to being interrupted Sunday, brutally beating the man who tried to stop him. Police say the crime went