The five-day-old Detwiler Fire continues to grow, though at a slightly slower pace than it did in the previous couple of days, reaching 74,000 acres by Friday morning. It is now 15 percent contained, up from 10 percent on Thursday, as the Chronicle reports, and in total 58 homes have been destroyed in addition to 60 outbuildings.

Cal Fire spokesman Jason Motta tells the Associated Press that crews, including hand crews and those with bulldozers, have managed to maintain a fire line a half mile outside the town of Mariposa, which remains under a mandatory evacuation order. The town sits 35 miles southwest of Yosemite National Park in what was once Gold Rush country along Highway 49. "The imminent threat to Mariposa is over," Motta said, but added that crews will continue to maintain that line.

Motta also says that the fire appears not to be a threat to Yosemite either, as most of its movement is to the south. But the fire closed one of the main roads into the park, and smoke and ash have been seen all around the park's big sights, including Half Dome, this week. Also, as you can see on the map below, the northern edge of the fire is licking at one border of Yosemite, near Dogtown. 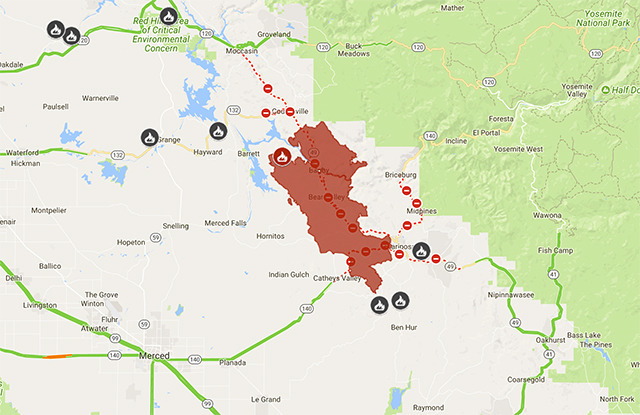 3,800 firefighters remain on the scene of the Detwiler Fire, which is the biggest of 17 significant wildfires currently burning around the state.

As the Sacramento Bee reports, however, there have been 100 new wildfires reported just in the last four days alone, which including the Detwiler Fire have burned around 200,000 acres. It's looking like a scary fire season despite the drought being technically over  there have been over 3,300 blazes reported in the state so far this season, compared to 2,480 by this time last year.

TechCrunch writer Catherine Shu repeatedly declined the advances of 500 Startups venture partner and entrepreneur-in-residence Tristan Pollock but that didn't stop him from allegedly grabbing her and groping her. Disgusted with what she