The biggest wildfire currently raging in California is the 70,000-acre, 109-square mile Detwiler Fire in Mariposa County. It nearly doubled again in size between Wednesday and Thursday, and as the Weather Channel notes, it is now larger than the size of Seattle. The fire has forced the evacuation of the entire town of Mariposa, population 2,000, and it is currently threatening 1,500 structures  though the Associated Press reports that firefighters have managed to keep the blaze at bay from the town by about a half mile. A CalFire spokesperson said yesterday that the total number of homes and structures under threat is 4,500.

There was a brief power outage in Yosemite National Park Tuesday related to the fire, however power was restored. As the LA Times reports, the park's main, 70,000-volt transmission line is nearby but not currently threatened by the fire, unless the fire changes directions.

The fire is burning in steep, hilly terrain on both sides of Highway 49, and at its closest it now appears to be between 5 and 10 miles from the western edge of Yosemite  though a CalFire spokesperson put it at 35 miles away on Wednesday. Smoke has made the air hazy around Yosemite's famous attractions, and fine ash is raining down over the park as well, per the LA Times. The fire is northeast of Merced, and due east of Turlock by about 40 miles. 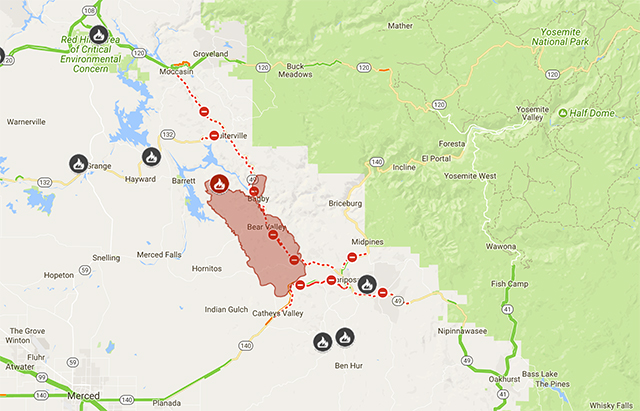 Nearly 5,000 people have been evacuated so far, and according to the CalFire incident report, 3,181 firefighters are currently battling the blaze. 45 structures have been destroyed so far, and it's unclear how many of those are homes.

Jeff Marshall, a fire behavior analyst with CalFire's Incident Management team, tells the LA Times that the flames are between two and four feet, with some flares reaching 25 feet high.

The fire has been described as "explosive" and "aggressive," and Mariposa County Sheriff Doug Binnewies tells the LAT that this is the first time he's ever known of an entire town having to be evacuated from a fire  though the Bay Area likely will remember that the town of Middletown had to be quickly evacuated, and was largely destroyed, during the
Valley Fire in Lake County in 2015.

The Detwiler Fire is already twice the size of the last big wildfire to hit the region, the 30,000-acre Telegraph Fire in 2008, which destroyed 30 homes in the area of the town of Midpines.

Some owners spray painted animals as #DetwilerFire got close. Planned to let them go & hope for the best. Luckily they got out in time! pic.twitter.com/ztj0gK9Nun

The USFS Blue Sky Modeling Framework projects where smoke is expected from the #DetwilerFire , impacting the Sierra & foothills. #cawx pic.twitter.com/sZjwTFDF4Y

Fans of “Conservatives vs. Antifa” antics in Berkeley will want to know that the latest dust-up is going precisely according to formula. Barely a week after Berkeley College Republicans and the Young America’

A crackdown on hourly rentals in Tennessee hotels has apparently sent sex workers into area Airbnbs, with one Oakland man allegedly traveling south to cash in on the brave new brothel world. ABC