The Detwiler Fire west of Yosemite is raging on in its third day, tripling in size since just yesterday to encompass nearly 46,000 acres, and now threatening the town of Mariposa, which has a population of 2,000 people.

The Mariposa County blaze, due east of Modesto in the Sierra foothills along Highway 49, near Lake McClure, broke out Sunday afternoon and has ballooned quickly thanks to dense and abundant fuel  some of it sprouted up in the spring after abundant rains this past winter and now dried to a crisp. Also, as the fire's incident management team tells the LA Times, the area has an ample amount of dead trees killed by both the drought and the bark beetle infestation. The terrain into which this fire has been moving is steep, which has added to the challenge of battling it, and it is now just at seven percent containment, as local station ABC 30 reports.

As of Wednesday morning, the fire had destroyed eight structures, and has spread across 72 square miles, with another 1,500 homes still possibly in its path, making the evacuation of Mariposa mandatory. 2,200 firefighters are now battling it. As the Associated Press reports, in addition to the 1,500 homes, the fire is threatening some power lines that provide electricity to Yosemite National Park. 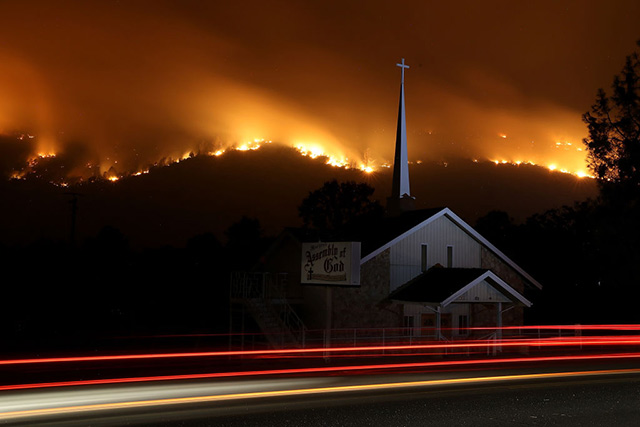 Governor Jerry Brown declared a state of emergency in Mariposa County on Tuesday, and FEMA emergency funds were made available from the federal government.

CalFire's report describes the "extreme and aggressive fire behavior" of this blaze, and says that it now "encroaches on culturally and historically sensitive areas."

And a CalFire spokesman tells the Chronicle that 4,500 homes are actually under threat.

Smoke from the Detwiler Fire can now be seen from weather satellites spreading as far as the northern edge of Nevada.

Almost certainly, this looks to be one of the major fires of this wildfire season. Investigators continue to search for its cause.

Downtown Mariposa looks like an eerie ghost town because of the #DetwilerFire pic.twitter.com/D37yplOn0d

Police are seeking three teenage males today, after the trio shot a bus parked in the Mission District with paintballs, then turned their weapon on the woman inside it. According to the San

Fire in San Francisco believed to have ignited at homeless encampment; blaze has since been extinguished. https://t.co/V3X2cL8V1E pic.twitter.com/1FYVHdgPEM— NBC Bay Area (@nbcbayarea) July 19, 2017 The San