The wildly anticipated trippy Summer of Love light show at the Conservatory of Flowers in Golden Gate Park has its grand lighting ceremony Wednesday night, but the technical and artistic aces of Illuminate and Obscura Digital did a series of test projections Monday night in preparation for these evening displays of color scheduled to run every night through October. SFist was there to capture pics and video of the illuminated magic to come, getting a sneak preview of how the project uses the exteriors of the 1879 Victorian greenhouse as a canvas for 1960s-inspired psychedelia. In all, ten different projectors will implement six different themes (some of them animated) to create a dazzling, high-tech yet retro feast for the eyes to honor the 50th anniversary of the Summer of Love. 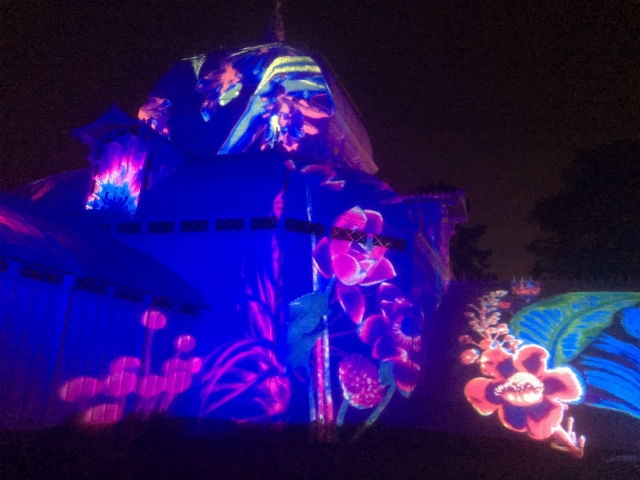 Wednesday’s ceremony coincides (arguably) with the Summer Solstice and the first day of summer, and Rec and Parks tells us the countdown and and official lighting will occur at “dark o’clock” Wednesday night. (That’s currently projected to be 9:18 p.m.) The festivities kick off at 6 p.m. with a free Surrealistic Summer Solstice Concert, for which you’re encouraged to come early, bring blankets, and RSVP. 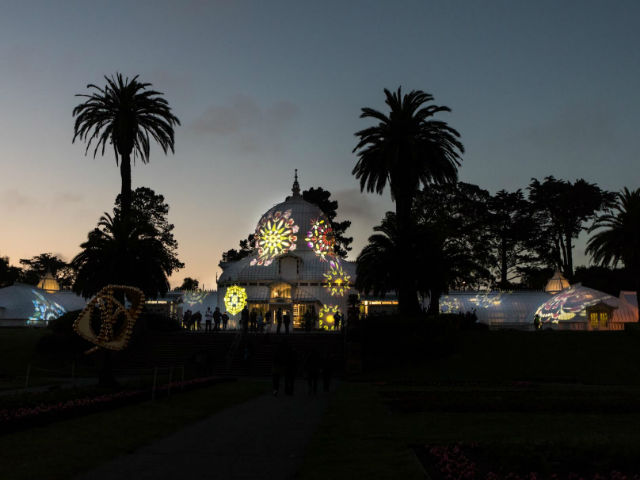 The psychedelic sorcery of this display is powered by contraptions called gobo projectors. “These are typically used to spin a bad corporate logo on a showroom floor,” says Ben Davis, founder of Illuminate, the arts nonprofit behind our beloved Bay Lights project. “Here they’ve been taken to bizarre extremes by the technical team at Obscura, who have taken ten of these things and networked them together across the skin of this building.” 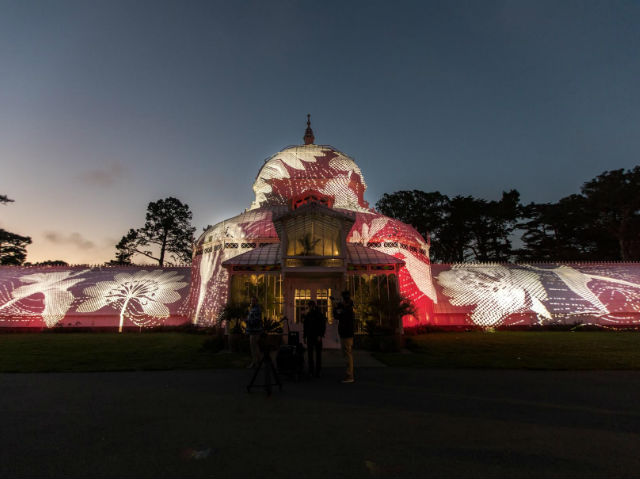 The entire project is paid for not with your taxes, but by a philanthropic group called the SF Parks Alliance. “This is all privately funded,” SF Rec and Parks general manager Phil Ginsburg told SFist. “The Conservatory has always been spectacular inside, [and] using the exterior face as a canvas of art and light, our hope is to bring more people to the Conservatory and engage the next generation in the Conservatory.”

Davis calls the display “an absolutely non-commercial expression that is 100 percent based on generosity, a free experience for everyone involved. In the spirit of Summer of Love, this is a radically accessible gift.” 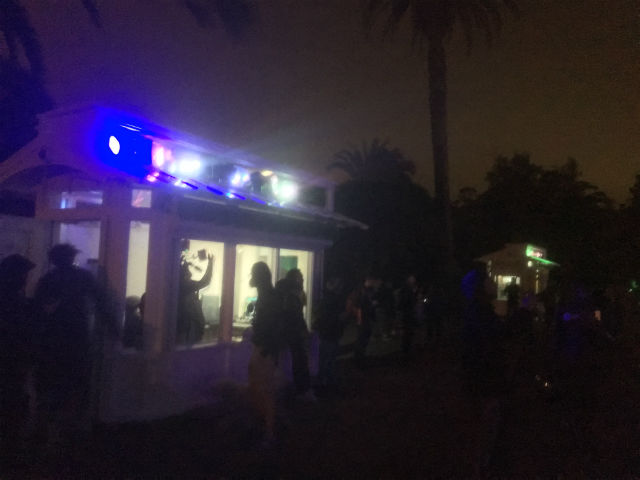 The projections are run from the two modest little kiosks seen above. Logistics on the project started back in March, with a team of technical lighting specialists, software engineers, and infrastructure experts. “We 3D mapped the building,” said Obscura Digital’s Ann Brilz, the executive producer on this project. “We scanned it and created a model and learned how to map our images to the architecture.” Actual construction and testing have been underway for the last six weeks, generally between the hours of 9 p.m. and 2 a.m.

“We were limited to the darkness,” Brilz told SFist. But once Wednesday’s Grand Lighting takes place, the projections should essentially work on auto-pilot.

“We have timers set,”Brilz said. “A timer will turn on all of the projectors, all of the lights with the shutters closed will warm up. We time it with the darkness, so that will be a progressive thing based on the sun, it will come up on its own. There are security lights out here, those are also on a timer. So those will go down as the lights go up.”

The video above should not be considered a “finished product” display of the lights’ animated capabilities. Monday night was just a dry-run test, and not all of the hardware pieces have even arrived yet. Further, this is just one small section of a very large animated illuminated canvas.

Here we see lighting technicians making last-minute alterations to the display. You'll notice how they have to map individual bits to fit together into a larger piece, and if you listen closely you can hear the lighting techs trying to coordinate the razzle-dazzle. 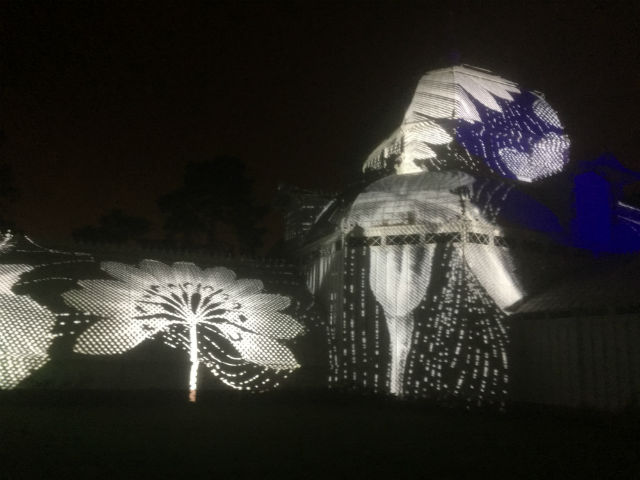 Obscura Digital was also behind the City Hall 100th anniversary display, and they’ve done projections at the Vatican and New York’s Empire State Building. While this display is currently scheduled to run until the end of October, the Obscura people have big plans for more projections. 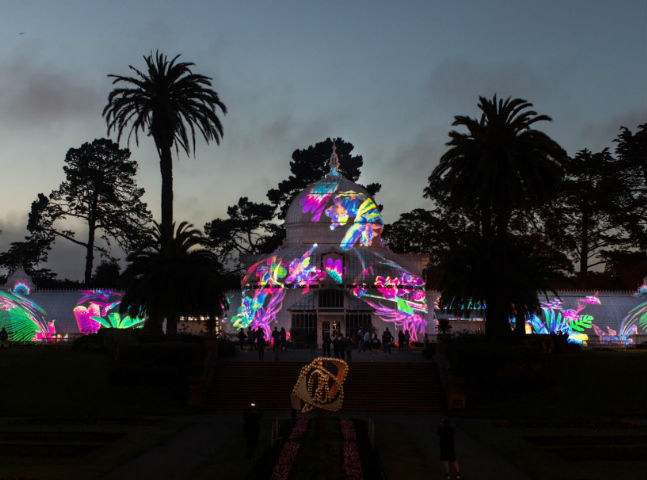 “This piece is intended to be here for a long time. We’re not thinking short-term,” Obscura Digital founder and chief creative officer Travis Threlkel told SFist. “I expect this field will have people making out here every night for the next fifty years.”

One cool aspect that hasn’t gotten much attention is a planned, Fridays-only exhibit called ‘Be’ in the tunnel outside the Conservatory. On Friday nights, the Illluminate’s Ben Davis is planning a sort of candles, chimes, and meditation installation that uses the tunnel's unique capacity for sound art. “Musicians tend to gather there. I thought, what an amazing space because it’s so perfectly frames the Conservatory of Flowers,” Davis told SFist. “It’s a chance to use ritual to create a sacred space. It’s an emotional palate cleanser to bring you into the Summer of Love.”

“We live in an era where fear and darkness seem to spreading around the globe,” Davis said, explaining his philosophy on this illumination project. “San Francisco has this opportunity to bring our light and love powerfully out to the world. It is important to protest, but it is also important to celebrate.”

You can celebrate the lighting of the Conservatory of Flowers from 6-10 p.m. Wednesday at the Surrealistic Summer Solstice Concert from 6-10 p.m. (RSVP here), and nightly at sundown through October.

Two UPS coworkers who witnessed last Thursday's shooting in Potrero Hill, one of whom was shot in the leg during the ordeal, remain confused about what drove 38-year-old Jimmy Lam to kill three

A man who worked at several San Francisco school campuses was arrested earlier this month, following an investigation into an alleged sexual battery at an area middle school. In a press release sent