There is currently an overflowing, lovin’ spoonful of Summer of Love commemorations in San Francisco, from street fairs to outdoor concerts to retail window displays  but none of them really offers a plausible date night with comfortable, indoor seating. That’s the upside of the ACT Geary Theater’s production A Night with Janis Joplin, a two-hour-plus Broadway musical that opened Wednesday night at the ACT Geary Street Theater and runs through July 9. This show is the Summer of Love homage that brings the most legit artistic merit, a full-blown Broadway production with an eye-candy light show and high-end production values.

The risk going into a show called A Night with Janis Joplin is that it will more resemble a cover band at some Reno casino lounge than a genuine Broadway experience (the show played at Broadway’s Lyceum Theater in 2013 and 2014). But A Night with Janis Joplin fashions itself more in the mold of Hedwig or Beautiful: The Carole King Musical by interspersing rants, monologues, and gut-spilling storytelling between the numbers wherein the lead (Kacee Clanton, who was the alternate Janis Joplin in the Broadway production) brings the psychology, neuroses, romantic frustrations, and freight-train alcoholism of the subject to life. 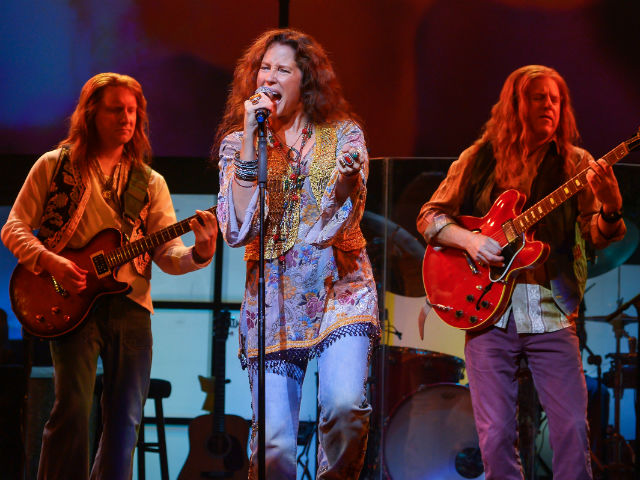 Clanton has pretty much made a livelihood out of impersonating Janis Joplin, having also toured with both Joe Cocker and Big Brother and the Holding Company to come out and perform Janis numbers. She can nail this schtick as well as anyone alive. But the monotonous peril of a cover-band show is avoided here with a quartet of greek-chorus performers who treat the the audience to lyrical visits from Janis’ musical influences (Aretha Franklin, Nina Simone, Etta James and others). The show is sort of a course in ‘Women in Pop Music, Post WWII’, and Sharon Catherine Brown stands out in both the first and second acts as anonymous character called Blues Singer who produces both of the show’s vocal high points. 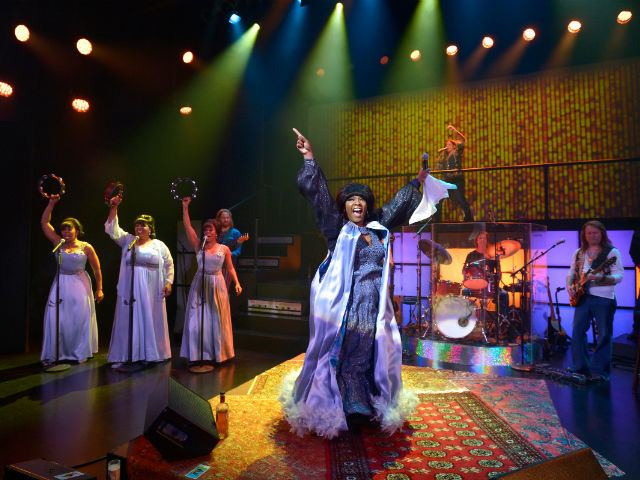 As a nostalgia musical, A Night with Janis Joplin is spectacular entertainment. (People next to you will be singing and dancing like it was Mamma Mia! Get used to it.) As a biography, though, it’s pretty threadbare. We hear nothing about Janis’ conflicts with her band Big Brother and the Holding Company, their name comes up precisely once in the show’s two-hour, 15-minute run time. There are no great backstage stories or gossip about Bobby, Jerry, Wavy, or any of Janis’ Summer of Love contemporaries. And Janis’ descent into drug addiction is pretty carefully smoothed over in a way that indicates the family’s estate had a hand in the show (they did).

So you won’t get a riveting or revealing biography in A Night with Janis Joplin, but you’ll get the musical thrills of seeing a Janis performance if you’re say, younger than 50 years old and you never got a chance to see her live. This rambunctious musical could end at intermission and you’d still totally think you got your money's worth.

'A Night with Janis Joplin' runs through July 9 at the ACT Geary Street Theater. Tickets here.

Related:Janis Joplin Biopic In The Works With Michelle Williams To Star

You likely remember the tale: Back in March of this year, a driver on a San Francisco stretch of 101 was surrounded and attacked by a group of dirt bike riders, apparently because

Scroll down for updates. A look at recent coverage of ride-hailing company Uber is, forgive the expression, like watching a car crash. It's horrible (for everyone, including employees, drivers, passengers, investors, and people