Confirming what has been credible rumor since Sunday, Uber CEO Travis Kalanick announced Tuesday that he would be taking an indefinite leave of absence from the company he founded to "work on Travis 2.0," and hopefully help the rideshare giant recover from a year of terrible press and dwindling love from the public. The decision comes as a direct result of recommendations made in a report prepared by former attorney general Eric Holder and law partner Tammy Albarrán of the firm Covington & Burling following a four-month investigation  and the report was also released to Uber employees today, with the recommendations made public here.

BuzzFeed scored a copy of the email Kalanick sent, which reportedly reads, "The ultimate responsibility, for where we've gotten and how we've gotten here rests on my shoulders... For Uber 2.0 to succeed there is nothing more important than dedicating my time to building out the leadership team. But if we are going to work on Uber 2.0, I also need to work on Travis 2.0 to become the leader that this company needs and that you deserve."

Kalanick framed the leave as needing "to take some time off of the day-to-day to grieve my mother, whom I buried on Friday, to reflect, to work on myself, and to focus on building out a world-class leadership team."

Apart from recommending a leave for Kalanick and a restructuring of his responsibilities when he returns, the reports also recommends the hiring of a COO who would be a "full partner" to the CEO. But this is going to represent a period of high turmoil and leadership shakeups at the company after, as BuzzFeed notes, "more than a dozen executives have departed this year alone," including the man who's served as Kalanick's second in command, Emil Michael, who announced his departure Monday.

According to Recode, Kalanick was still deciding whether or not to take this leave of absence as late as Tuesday morning.

The Holder report specifically recommends that "The Board should evaluate the extent to which some of the responsibilities that Mr. Kalanick has historically possessed should be shared or given outright to other members of senior management."

Further, the recommendations outline a number of the things the company should be doing to enter a phase of maturity  it's kind of reads like Building a Real Company 101. Among some other recommendations are creating a more independent board of directors, including an oversight committee to deal with missteps within the company's ranks, and elevating the visibility of the company's head of diversity, Bernard Coleman. Another recommendation is that the company employ a version of the NFL's "Rooney Rule," making sure that for every open position at least one woman and one minority candidate are interviewed before a hire can be made.

The report also suggests that the company "adopt values that are more inclusive" overall, and "reduce the overall number of values, and eliminate those values which have been identified as redundant or as having been used to justify poor behavior, including Let Builders Build, Always Be Hustlin’, Meritocracy and Toe-Stepping, and Principled Confrontation."

Most pointedly, though, the list of recommendations specifically calls out the consumption of alcohol or controlled substances in the workplace and at work-related and team-building events. 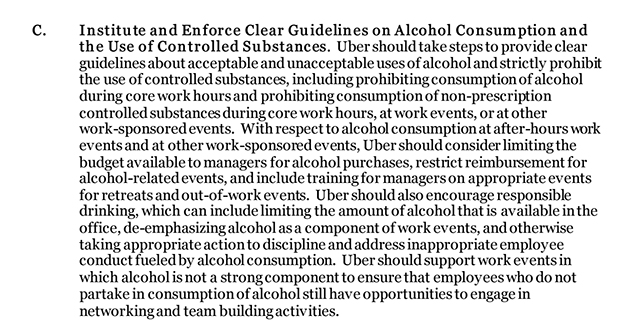 As a result of the controversy surrounding sexual harassment allegations, as well as the #DeleteUber campaign that went viral in January following an apparent misunderstanding during an immigration-ban-related taxi strike in New York, the $70 billion rideshare company has ceded some significant market share to rival Lyft. As the Washington Post reports, Lyft now accounts for 25 percent of the rideshare business in the US, up from 18 percent at the beginning of 2017.

And Uber remains in a highly public legal battle with Google-owned self-driving car company Waymo over the alleged theft of trade secrets by a recently fired Uber executive, Anthony Levandowski.

If anyone is familiar with how to teach cars to drive themselves, or how to teach a company how to run itself, Uber may be hiring.

Half of a Western Addition mugging team was arrested Monday, after police tracked down one of the members of the gun-wielding duo. It all happened near the corner of Divisadero and Eddy Streets,