An SFPD car got in a seemingly random rollover collision Friday evening next to Ocean Beach, within view of the Beach Chalet from which the above and below photos, sent in by an SFist reader, were shot. According to KRON 4, the incident happened at 7:52 when the police cruiser hit "some kind of object in the roadway in the 1000 block of Great Highway."

The airbags deployed and the two officers in the car suffered injuries said to be not life threatening. The Examiner also has a good photo here.

Captain Jack Hart tells ABC 7, "This is just another reminder of the hazards of driving in San Francisco, and the hazards that our officers have to face every day. And we're very lucky on this one." 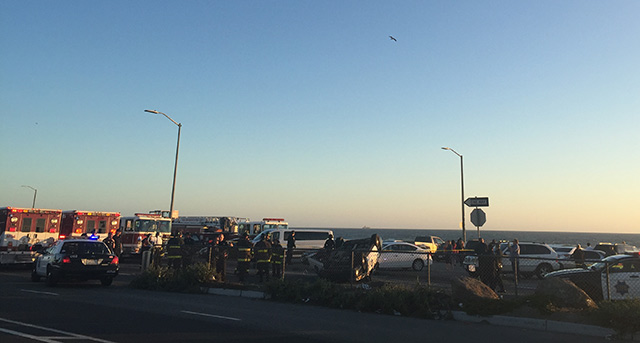 Below, ABC 7's chopper footage from the scene. The SFPD is investigating the crash and seeking surveillance footage to better understand what happened just before it to cause it.

There's a suggestion that a second car may have been involved somehow, and that the driver of the second vehicle did not stop, and could be cited by the SFPD.

Wife of man charged in #GhostShip fire breaks her silence: “We would never have lived in a place that was unsafe.” https://t.co/w7XB0ZSzZQ pic.twitter.com/PXz63ueA10— SFChronicle (@sfchronicle) June 10,