A Santa Clara County jury has spared the life of 26-year-old Antolin Garcia-Torres by giving him a sentence of life in prison without the possibility parole.

According to KRON 4, Garcia-Torres was convicted of the 2012 murder of 15-year-old high school student Sierra LaMar last month. The jury was given the option of sentencing Garcia-Torres to death by lethal injection, but after two days of deliberation, they instead chose to just lock him up forever.

LaMar disappeared on her way to school on March 16, 2012 and her body has never been found. DNA has linked Garcia-Torres to the disappearance and presumed murder of the girl. Her DNA was found in his trunk, among other evidence. (SFist has brought you news of this case before.) 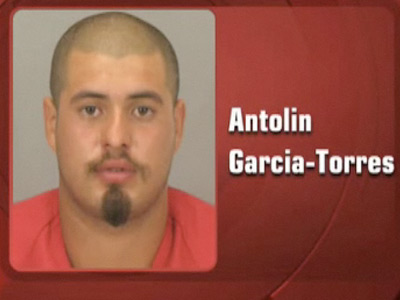 Garcia-Torres was also charged with three attempted kidnappings of women in a Safeway parking lot in 2009. The Santa Clara District Attorney's Office has issued the following statement:

A jury today sentenced the murderer of 15-year-old Sierra Lamar to life without parole. Antolin Garcia-Torres, 26, was convicted last month by the same jury of Sierra's first-degree murder, as well as Taser attacks and kidnapping attempts on three other women. District Attorney Jeff Rosen, who had sought capital punishment, said he was satisfied that the convicted murderer would never draw "another free breath."

District Attorney Rosen said, "For us, for our community, this is a day of significance and sadness. Yes, it is a day of justice and ultimate accountability for the person that snatched Sierra's future away. But, no, Sierra is not coming home. Human justice can hold the guilty accountable, but it cannot resurrect the dead. There is no joy with today's death verdict, only mourning for the murder of a child, a void that will ache forever, a hole that will never be filled."

The jury deliberated for three days to decide the sentence, following a penalty phase trial. The three kidnapping attempts - all against women in grocery store parking lots - occurred in 2009. Sierra Lamar was kidnapped in Morgan Hill in 2012 and killed. Her body has not yet been found.

"He will continue to live in bondage as long as he lives his life. I feel at peace that he will not be on the streets to harm another child but the angst will be in our lives forever," said LaMar's mother, according to the San Francisco Chronicle. She also hopes that Garcia-Torres will one day confess to the crime and reveal the location of Sierra's body.

Garcia-Torres showed no reaction when his sentence was read.

Moulin Rouge in drag, a Rhythm Nation dance class, street festival-ing at Haight and Ashbury, very fancy wine tasting, and a memorial for the "Gay Betsy Ross": this week's event line-up is basically

—
Killer Of Sierra LaMar Gets Life Without Parole
Share this