It's been nine months since Instagram unabashedly jumped into the Snapchat realm of "stories," i.e. ephemeral 10-second video and photo montages that disappear after 24 hours, and just six months since they rolled out another Snap-esque feature, disappearing direct messages. And today they're rounding out the imitation game with funny face filters which the company says on its blog, as if this were a brand new concept, "Whether you’re sitting on the couch at home or you’re out and about, you can use face filters to express yourself and have playful conversations with friends."

The most Snap-like filters are the animal ears and noses, but they're launching with eight in all, including a Frozen-like ice princess crown, and, for reasons I don't really get, a bunch of math equations floating around your head.

And as CNet notes, the new Insta filters work with both the front and rear-facing cameras on your phone.

Not only that, but they've rolled out video effects like "Boomerang," which takes a burst of photos that will play backwards and forwards, and "Rewind," allowing you to record a video but play it backwards. There's also a "Hands-Free" option that lets you tap and hold to get a countdown before a video starts to record.

Also, there are now hashtag stickers you can add to photos, and an eraser tool which lets you "erase" a message from over an obscured photo, like so: 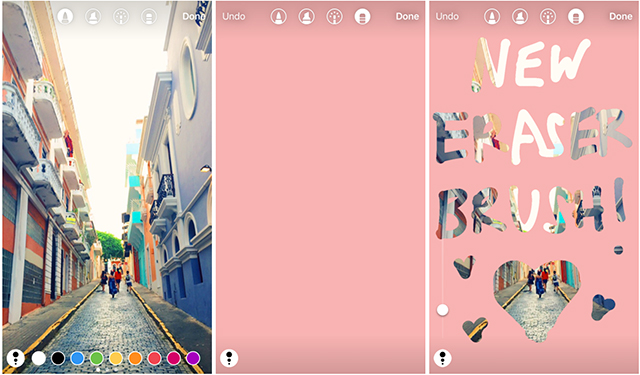 This all follows on parent company Facebook rolling out filters and camera effects on their iOS and Android apps earlier this year. And it follows on reports that the newly public Snap Inc. is seeing some anemic user growth so far this year that has investors less than pleased.

Next up, look for Instagram to add those ever addicting "streaks" that keep tweens and teens forever proving their loyalty to friends by making sure they Snap each other every day, which just sounds exhausting and I thank the fates every day that I did not grow up with all this crap. Oh but there I am showing my age.

Proving just how easy it is to jump a fence, enter the restricted area, and climb the main cables all the way to the top of the Golden Gate Bridge's towers, two teens

There may be sighs of relief today at the Bay Area’s most allegedly sexually toxic work environments like Uber and Zenefits, because another “condoms and sex in the workplace” scandal has arrived