Damage from a basement fire last night just before 9 p.m. at 662 Clay Street, a three-story building consisting of housing and SRO units over commercial units, has temporarily displaced more than 60 residents. It's also temporarily shuttered Alfred's Steakhouse, whose entrance is on the other side of the building in the alley of Merchant Street (near Kearny).

Firefighters soon reported the two-alarm fire as contained, and were hopeful residents would be able to reoccupy the space quickly. The American Red Cross had offered to help shelter the residents, and no injuries were reported.

#041217WF2 2nd Alarm UPDATE this fire is under control w/ no injuries fire isolated to lower level Hopeful tenants will be able to reoccupy pic.twitter.com/WUWlsDLYZn

Meanwhile, Alfred's General Manager Lisa Robbins tells SFist that smoke damage in the basement will close the restaurant temporarily. "We really hope it's days, not weeks. We're still having the damage assessed, and we're planning to close for the rest of this week and get reopened as fast as we can." 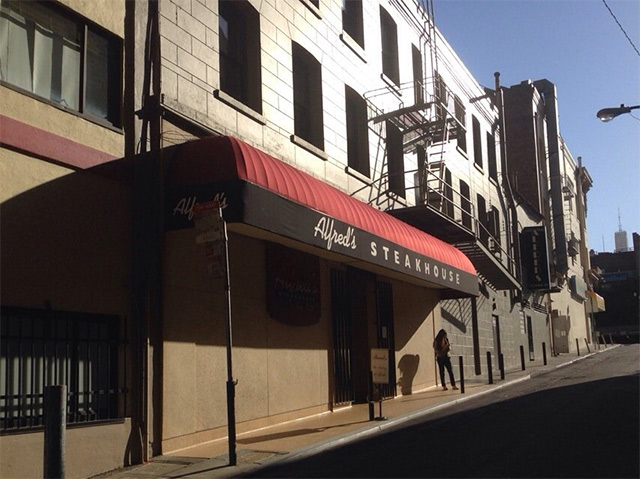 Alfred's, opened in 1928, was taken over by the Daniel Patterson Group in 2015, updated extensively, and reopened in February 2016. "After having remodeled the place just over a year ago this is a little bit heartbreaking," Robbins said. No need to worry about the bright red booths, though: "The whole first floor of the restaurant is fine, the damage is all really in the basement."

If you're relatively new to the Bay Area, and particularly if you've never lived or spent much time in the East Bay, it will be news to you that a great many people

Attendees at a community meeting on Upper Haight crime got a mixed message Tuesday night, as police told those assembled that they should report all crimes they observed, then said that certain crime