Entering the Conservatory of Flowers gives Ben Davis butterflies. "You step inside, and you're filled with awe a million times over," he tells SFist. As the founder of the nonprofit arts group behind the beloved Bay Lights, Illuminate (née Illuminate the Arts), Davis thought he might be able to add another lustrous element to the Conservatory. You know, something akin to the twinkle the Bay Lights gave a bridge often overshadowed by its brighter-colored neighbor.

Hence Illuminate's plan to light up the oldest building in Golden Gate Park, which is also tied to the 50th anniversary of the Summer of Love. Of the many tributes to that summer, this could be the most fittingly trippy. The idea: Use the white-painted Conservatory of Flowers as a massive projection screen, displaying images and scenes from the park's history including the Summer of Love — think, appropriately, flower children. 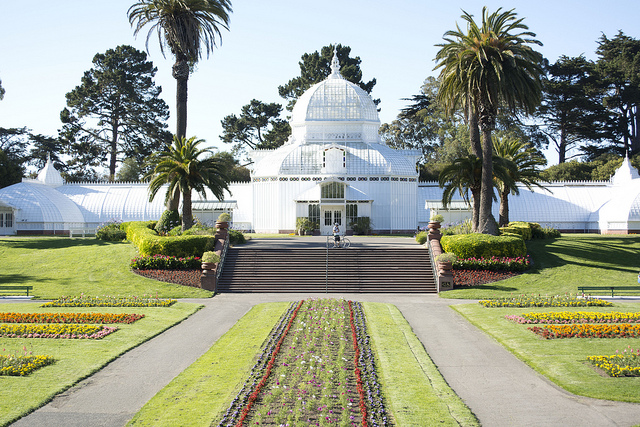 "We want to help keep the park active and alive while it's open, expand its use, and increase widespread participation in the park," Davis tells SFist, citing park events like NightLife at the Academy of Sciences. He adds that, since Golden Gate Park closes at midnight, the piece will be dark by then, too. And to make sure the lights don't wake up the plants or interfere with their health, Davis is working with the conservatory's new director, Matthew Stephens.

Davis tells the Chronicle he's busy in fundraising mode — a donation page is here, with all funds going to the Conservatory of Flowers. And Willie Brown teased the news of the lighting scheme last month, seeking major donors. Davis tells SFist that Illuminate started with a six-figure goal of just under $300K and is now near five figures.

Illuminate would work with San Francisco-based lighting firm Obscura, known for the ever-changing colored lights of City Hall. Correction: Obscura was not responsible for the LED uplighting at City Hall but instead was behind projections for its Centennial Celebration. As locals, "They're taking an extra shine to this project," jokes Davis. Illuminate would like to hit the switch on the lights project in time for the summer solstice, serving as a "crowning event" of the Summer of Love's anniversary.

Meanwhile, Illuminate is also pushing another project to light up San Francisco with a project called LightRail. That idea, announced two years ago, would be to send ripples of LED light the length of Market Street to visualize where BART and Muni trains were below ground in real time. Fundraising for Lightrail began last September.

Now in its 60th year, the San Francisco International Film Festival has just switched to the much snappier but somewhat unpronounceable name SFFILM Festival and begins tonight at the Castro Theatre. With more

Did I ever tell you guys how my husband proposed to me? Of course I didn't, because I am a grown-ass woman who makes decisions in tandem with my partner and doesn't wait