San Francisco-based ratings company Yelp is getting five stars from LGBTQ advocates today. After stepping up yesterday to participate in an amicus brief supporting trans student Gavin Grimm in his lawsuit against a Virginia school that wants to force him to use the restroom of the gender he was assigned at birth — making it one of 53 US companies such as Apple and Airbnb to do so according to the Associated Press — Yelp's head of Diversity and Inclusion, Rachel Williams, revealed a new feature to highlight gender neutral bathrooms for the help and safety of all its users. As Williams writes to the company's official blog, Yelp will soon show users what stores, bars, and restaurants offer single-stalled bathrooms identified as gender neutral.

"On desktop and mobile versions of Yelp, users will be able to see whether or not a business offers gender-neutral bathrooms to patrons," writes Williams. "We will also be rolling out the ability to search for businesses on Yelp by the Gender Neutral Restrooms attribute in the weeks to come." 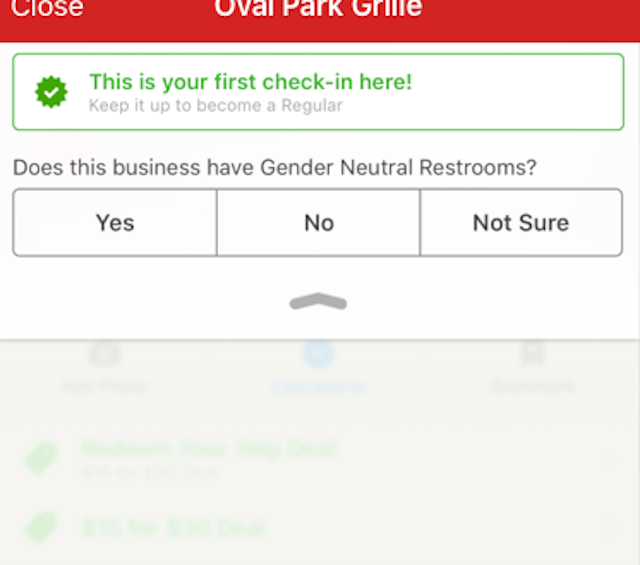 Yelp explains that it will collect this information via users, as through the above questionnaire, and it will allow business owners to edit the gender neutral restrooms attribute on their business user account. Yelp is the latest, but far from the only, technology company to embrace inclusivity when it comes to nonbinary and transgender users. In December, for example, Tinder consulted with trans advocates to overhaul its gender identity options and make room for users who wish to identify their gender in a way other than "male" or "female" on the app.

Ken Jones, a longtime activist in SF's LGBT community, is one of the primary characters portrayed in ABC's somewhat fictionalized though mostly based-in-fact miniseries, When We Rise. As we noted the other day