In the past SFist has tried to steer you to the city's finest independent booksellers, record shops, and even local fashion labels. Today we bring you a curated list of places to indulge your shoe fetish, or just to equip yourself with some new kicks for stomping the city streets  with an emphasis on the small, independent sort.

Bulo
This unisex footwear emporium has been going strong in Hayes Valley for over two decades, specializing in uniquely designed shoes, often imported from Italy, Spain, and Japan. Quality and prices tend to be higher than at your average designer shoe warehouse, but there are still deals to be had when stock runs low and stuff gets marked down. Expect to find a fair amount in the comfort category for women and mid-range dress shoe category for men, including brands like Hudson Shoes, Yuko Imanishi, and Free People.
418 Hayes Street

DreamTeam SF
Some SFist readers might recognize Dream Team from another context, as it was the site of a bizarre 2015 homicide in which one man who was attempting to rob the apparel store shot his accomplice. That scare didn't faze owner Donald Andrews, who himself was shot in the face in 2004 in a case of mistaken identity, his life saved, he says, because "my gold grill had stopped the bullet impact from coming in at full force and exiting at my throat." Following his brush with death, he worked as a caseworker for at-risk youth and with SF's DPW, then made his dream of opening a store featuring his signature clothing line a reality. In addition to streetwear, you can find a vaunted selection of sneakers, with new arrivals and hard-to-find classics appearing first on their Instagram before they're snatched by one of their many ardent fans. — Eve Batey
101 Broad Street between Plymouth and Capitol Avenues 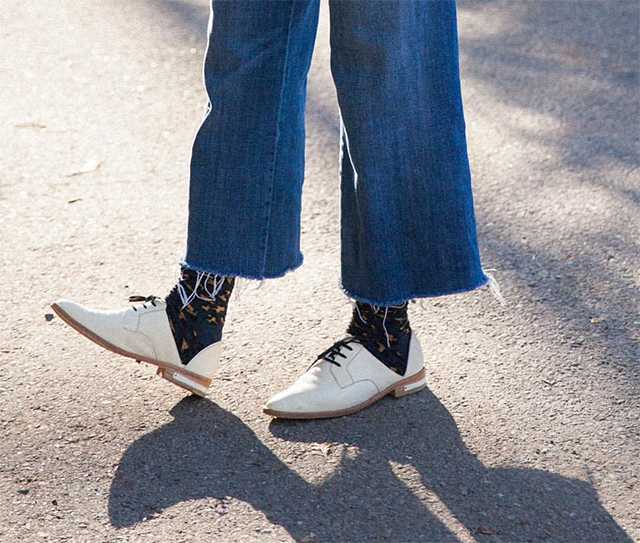 Freda Salvador
Shoe label Freda Salvador (designed by Megan Papay and Cristina Polomo-Nelson) keeps its flagship store here in Pacific Heights, and it's a mecca for the mule- and ankle-boot-inclined. Prices are high-ish, starting at $365 for flats and up to $550 for mid-heel boots, but the shoes here remain hot ticket items after launching just a few years back. As the designers describe their brand, it's a cross between "A French woman with no boundaries, a perfectly tailored Italian woman, an American rock star from the '70s, and a Mexican legend."  Jay Barmann
2416 Fillmore Street between Washington and Jackson 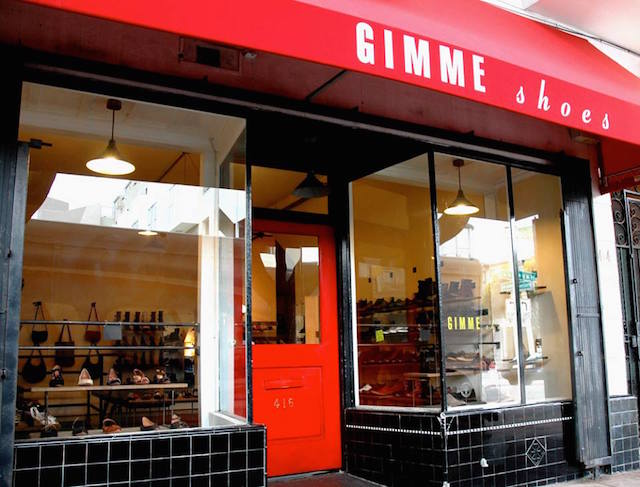 Gimme Shoes
The imperative of the name will surely appeal to that shoe shopper itch, and since 1984, 'Gimme Shoes' has been giving the people what they desire, nay, require. Their first spot was at Post Street, they then moved to Hayes Valley in '93, set up their now closed Fillmore Street shop, and added a second Hayes Street shop in 2010. Now you'll find the pair of them along Hayes Street, the better to stock up on must-have heels, boots, and everyday kicks from a lengthy list of designers. Yes, they do carry Y-3s, so stop calling them about it. —Caleb Pershan
416 Hayes Street and 381 Hayes Street, on either side of Gough Street 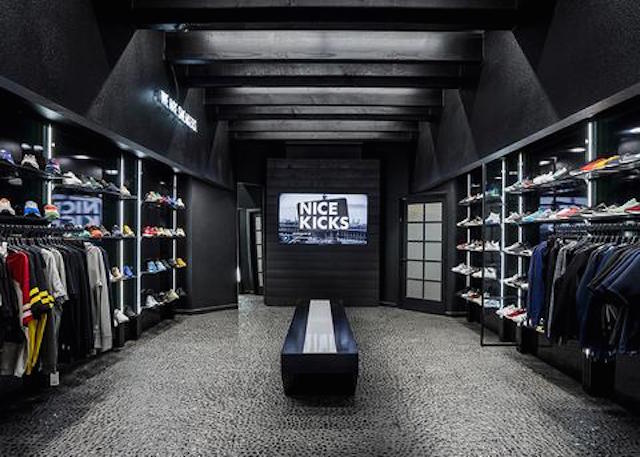 Nice Kicks
Nice Kicks, the new kids on the block in the local shoe biz, were founded in 2010 in Austin, Texas, before branching out with a Downtown Los Angeles shop, and last year, their San Francisco's Haight Ashbury digs in the bi-level former Shoe Biz space (the two companies actually merged, see more below). Selection, including athletic wear, is sure to please sneaker heads, and for your daily fix, you can follow along with Nick Kicks on Instagram, if sneakerporn is your thing. —Caleb Pershan
1420 Haight Street at Between Ashbury Street and Masonic Avenue 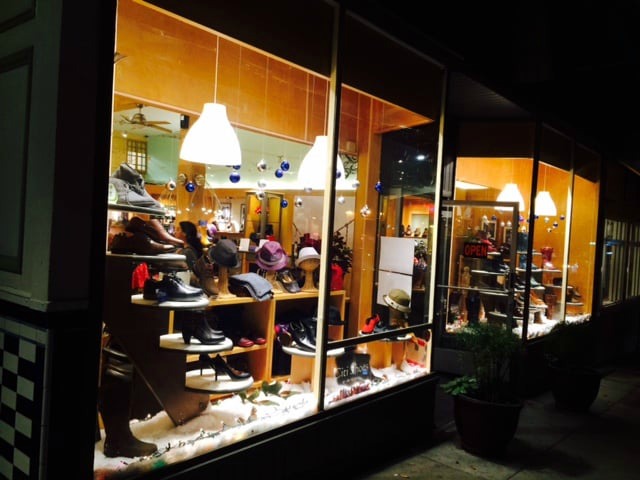 On the Run and CitiShoes
Located steps away from one another in the Inner Sunset, On the Run and CitiShoes were opened by Mark Wachter in 1977 and 2005 (respectively). On The Run is (slightly) more function than fashion, with offerings that include sports-focused shoes and brands like Clarks and Birkenstocks known for their therapeutic properties. In 2005 Wachter opened CitiShoes around the corner, saying “just because it’s fashion, doesn’t mean it can’t be comfortable.” Both sites are very focused on biomechanics, foot health and quality of movement and balance, including offerings like Wachter's own like of "high-quality orthotics," but CitiShoes is definitely the more traditionally stylish of the two, while On The Run skews way, way more normcore. — Eve Batey
On The Run: 1310 9th Avenue CitiShoes: 751 Irving Street 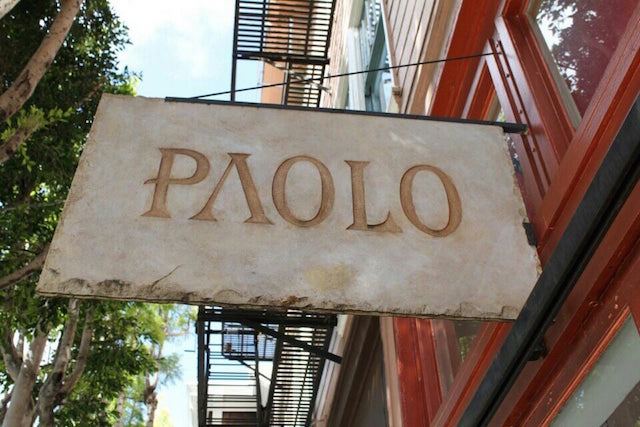 Paolo
Named for Paolo Iantorno, store founder, Paolo is a destination for San Francisco-designed, Italian-made dress shoes and boots. When you need one-of-a-kind leather knee-highs or eel-skin monkstraps — and you want to be sure that materials are C.I.T.E.S. certified and have all the right papers with United States Department of Customs and Border Protection — Paolo is where to go. Most items are made in batches of twenty-five pieces or fewer, so don't worry about showing up to the ball wearing the same old shoes as everyone else. — Caleb Pershan
524 Hayes Street between Octavia and Laguna Streets 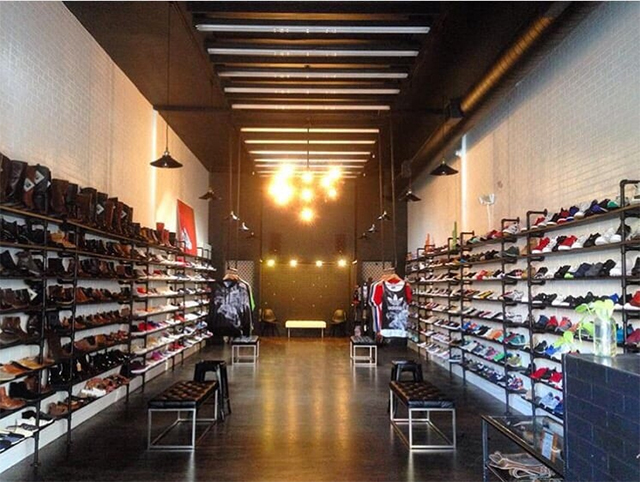 Shoe Biz / Anthem
Two years ago, the nearly four-decade-old SF shoestore chain Shoe Biz merged with Austin-based company Nice Kicks, giving over one of their two Haight storefronts to the more sneaker-oriented Nice Kicks, and rebranding two of their locations as Anthem. As longtime Shoe Biz proprietors Mehran Esmaeli and wife Nooshin Ansarinia told Hoodline at the time, they plan to remain at the helm of the merged company for several more years, and they're focusing on the in-house brand Ansarinia created and designs, manufactured in Mexico, called Sutro, a less-expensive alternative for fine, leather shoes. Shoe Biz is still the name of the Valencia location, and Anthem remains a reliable source for brands like Dr. Marten, New Balance, Vans, and Fred Perry.  Jay Barmann
877 Valencia Street, 1553 Haight Street, 3810 24th Street 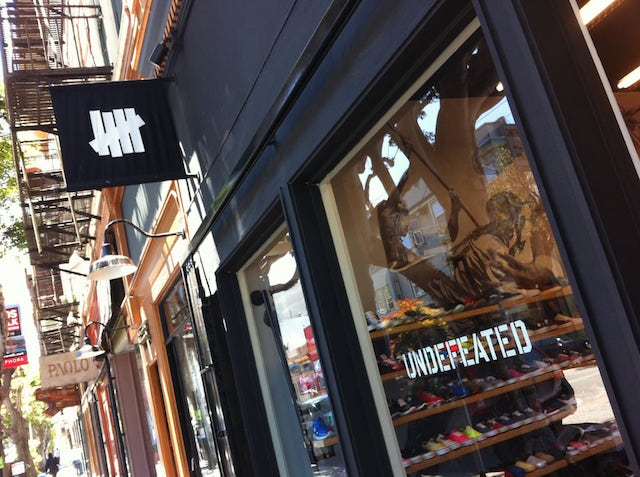 Undefeated
Whether it's classic Vans and Converse or the latest Nikes and Adidas that you seek, Undefeated has a perfect record at their shops from La Brea to Tokyo. Their Hayes Valley digs, est. 2011, are your source for sneakers of all shapes and sizes — Those seeking dress shoes, however, will have better luck elsewhere. Check out their house-brand UNDFTD hats, jackets, and slippers: These guys have you covered head to toe. —Caleb Pershan
516 Hayes Street between Octavia and Laguna Streets

When people talk about "the 60s" in San Francisco, they're talking about a period from January 1967 to December 1969  just three short years that would nonetheless forever reshape the population of the

A pro-Trump, pro-Yiannopolous, Proud Boys-affiliated rally for the alt-right planned for Berkeley on March 4 may just be a fiction perpetuated by social media, though that may not prevent counter-protesters from showing up