In their unenviable, continuing quest to rid the site of its "most toxic" troll population, Reddit has just shut down two related subreddits, r/altright and r/alternativeright, over the repeated practice of doxing. As TechCrunch reports, via the ban explanation on the Reddit page, the ban was because of "the proliferation of personal and confidential information," otherwise known as doxing, or the spreading of personal "docs" like home addresses and phone numbers  leading to prank calls, harassment, and the occasional COD pizza delivery. Also, it can lead to actual "I know where you live"-style death threats, and as we heard shortly after the election, it led to one subreddit moderator's car being vandalized, IRL. 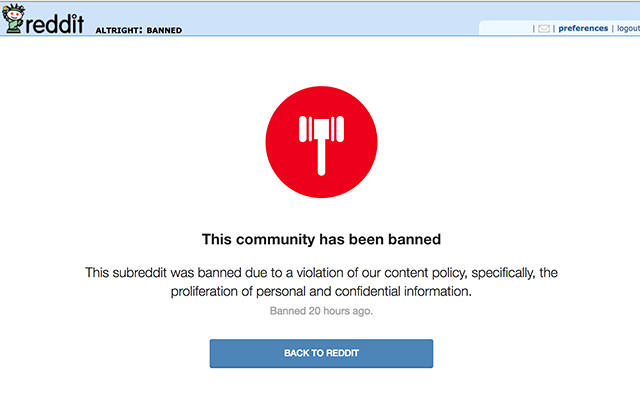 As CNet reports, despite the unapologetically racist and disgusting nature of the r/altright subreddit, it wasn't their racism or any implied incitements of violence that got them banned. It was just the doxing.

A cached screen of the message that welcomed new subscribers to r/altright explains exactly who they are, via a moderator whose screen name is LetThereBeWhite, and they don't want anyone mistaking their brand of racism with that of anyone on the r/The_Donald subreddit.

If you only know of the alt right from The_Donald, then do not know what the alt right is. You probably think it means something along the lines of cultural libertarianism or just being "more conservative". It doesn't... The Alt Right is a racial movement and has always been a racial movement. Race is at the very core of the alt right and there is absolutely no way to be alt right without discussing racial realism, especially from a white perspective. The mainstream media was not lying to you when they said we are full of white nationalists, racial realists, and fascists. That is what we are and we really do not give a shit about tax cuts or other policy issues.

According to CNet, some in the r/altright subreddit had been engaged in a campaign to dox the individual who punched alt-right hero Richard Spencer in the face on Inauguration Day, and that was perhaps the reason the community got banned. 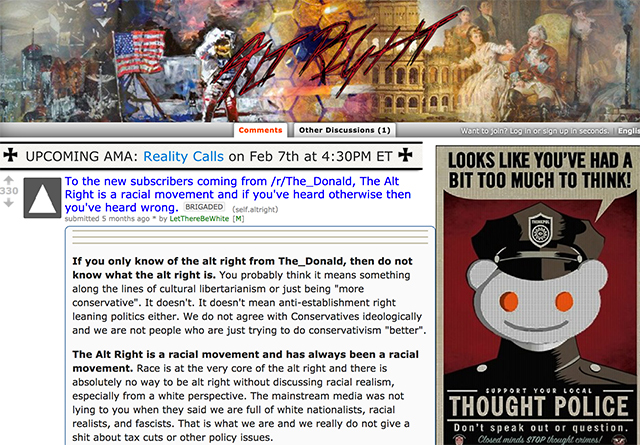 Reddit has a major struggle at its core these days, having become a haven for "free speech" in that it hosts message boards for people with (often highly offensive and gross) niche beliefs, and unsurprisingly some of these people don't behave according to normal rules of internet civility. As TechCrunch framed Reddit's troubles back in November, "if it can’t stop the trolls from blatantly abusing the rest of the community or projecting hate, it will have failed society and more mild-mannered users will move to cleaner pastures."

And meanwhile, the denizens of r/altright will scurry back to 4chan, or whatever.

Previously: Reddit Will Crack Down On Its 'Most Toxic' Trolls; CEO Still Apologizing For Editing Comments