In an age of destination dining, pricey prix fixes, and fusion cuisines that we don't call fusion anymore, it can be refreshing to return to a favorite local haunt. Whether it's the kind of cozy French spot that takes all its cues from Parisian bistros, or the sort of locals' spot with decent prices, reliably good food, and not a ton of press because it opened years ago and it does just fine with its regular clientele. San Francisco is often called America's most European city, and thankfully we have a solid cadre of European-style neighborhood eateries. And with all due respect to the Cafe Claudes, Zazies, and Chapeaus, none of which are hurting for praise or foot traffic, below we bring you SFist's picks for some of the city's most under-appreciated small-scale bistros, any of which is worthy of a date night if you happen to be nearby, but none of which are trying to win Michelin stars or attract Uber traffic from the Mission.

L'Ardoise
The name translates as "slate" or "chalkboard," and chalkboard menus and wine lists are a part of the intimate dining room at this Duboce Triangle mainstay. Both the classic French bistro fare and the wines are reasonably priced, especially for current-day SF, and chef Thierry Clement has been overseeing the kitchen here since he opened the place nine years ago  and I had to do a double-take when I spotted this 2008 review, because I could have sworn the restaurant was at least twice that old. The French-born Clement cut his teeth at The Bistro du Peintre in Paris, and in SF kitchens at Le Charm, Fringale, and Elizabeth and Daniel before opening this spot, and while the nightly specials are often divine, the house specialties like coq au vin, steak frites, and duck confit with garlic sauce are the perfect succor on a wintry evening, accompanied by a bottle of one of their well curated reds. Also, make sure to get the pommes landaises  fried potato coins  which don't show up often enough on American bistro menus, but they should.  Jay Barmann

Baker Street Bistro
The place may be enjoying an upswing of attention courtesy of Check Please!, which featured it in 2014 (see above), but Baker Street Bistro remains a hidden gem in my mind, one that I stumbled upon with friends a few years ago when we discovered some new and trendy spot nearby was closed. Chef Danel de Betelu says he tries to cook with his grandmother's passion, and having trained in France he is most certainly trying to evoke a Parisian bistro with everything from the artfully piped mashed potatoes to the Beaux Arts lettering on the restaurant's sign. His specialties include grilled lamb chops, his cassoulet with Toulouse sausage, and his perfect beouf Bourgignon, and the staff, like that at many of the bistros here, is legit French and warmly professional.
2953 Baker Street at Lombard 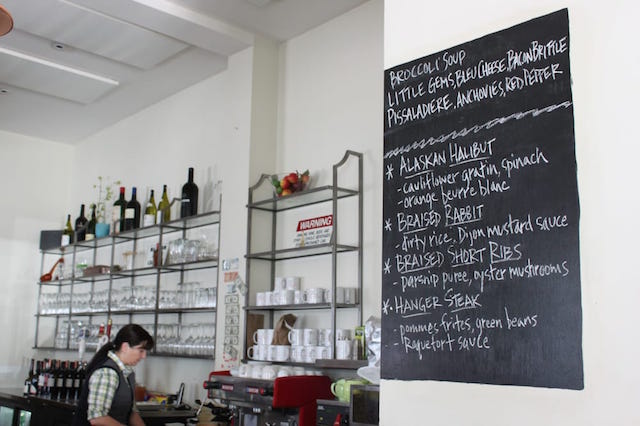 Bistro Central Parc
At this 2010-opened bistro, diners rave of the clams Bourguignon and the duck confit, the specialité de maison. As for pairings, the French-focused wine list and knowledgeable staff have you covered. Unlike much of the neighborhood that's often classified as NoPa, this spot is actually, literally, just North of the Panhandle, but you're forgiven for missing it in an area that's almost entirely residential. That said, maybe you have noticed it, on sunny days when outdoor seating is offered at brunch. — Caleb Pershan
560 Central Ave between Grove and Hayes Streets 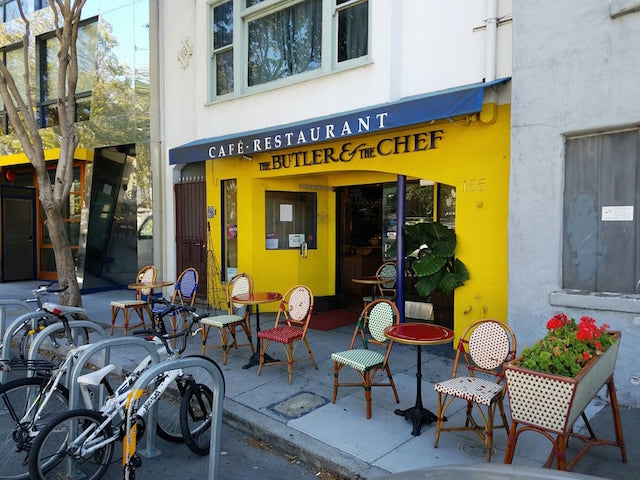 The Butler and the Chef
Situated right on South Park, a somewhat well kept secret that feels worlds away from the nearby SoMa bustle, this quaint and casual bistro is sure to charm. Open for breakfast and lunch only through 3 p.m. daily (closed Mondays), the provencal-inflected Butler and the Chef is known for morning staples like pain perdu and eggs Benedict. Savory crepes and croques madame et monsieur are popular all-day items, and beer and wine are also on offer. A final note, and a small aesthetic one, but their chairs are just right for the authentic bistro vibe. —Caleb Pershan
155A South Park Street at 3rd Street 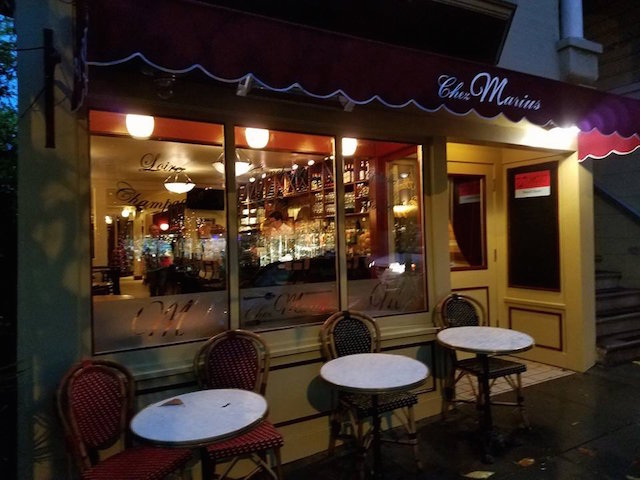 Chez Marius
When 15-year-old Noe Valley bistro Le Zinc closed at the end of last year, it changed hands to Laurent Legendre, the Parisian force behind Glen Park's beloved Le P'tit Laurent. His new bistro has been well received by the Noe neighborhood for its warm ambiance, unassuming, dog-friendly backyard patio area, and classic dishes like fresh salad Niçoise, bouillabaisse, and braised rabbit. Also, fans of french film will swoon at the name, derived, I would guess, from the same Pagnol trilogy from which Chez Panisse takes its name. —Caleb Pershan
4063 24th Street between Noe and Castro Streets

Curbside Cafe
Since 1906, Curbside's 2417 California location has been home to a restaurant, and for that last couple decades, that restaurant's been Curbside. Founder Antoine Alliaume sold the restaurant to former Curbside waiter Olivier Perrier and his wife, Gwyneth in 2010 (they actually met when Olivier waited on her at the place!). With a location just off Fillmore, it's a reminder of what the area was like before it was overrun with high-end chain stores — it's cosy, intimate, and a little idiosyncratic. A neighborhood go-to for a casually romantic dinner, they also sport a great brunch (my favorite is the brie and sundried tomato omelette), with a cup of coffee that never goes cold. It's one of my surest-fire go-tos in the city. — Eve Batey
2417 California Street, between Fillmore and Steiner Streets 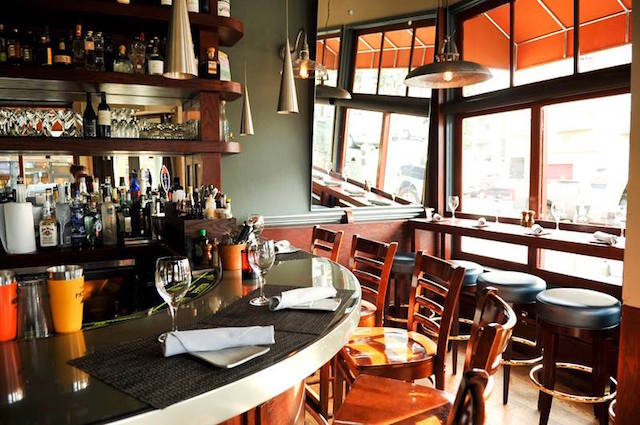 Garçon
Owned by Jerome Rivoire of Burgundy, France, and until recently helmed by longtime chef Arthur Wall, a New Orleans native who appears to be at work on a nearby cajun restaurant to be called Bayou, Garçon has been a staple on Valencia since 2005. Sometimes all you need is coq au vin or a steak frites, but take a look at the daily prix fixe to indulge. And, don't forget: Tuesday nights are BYOB with corkage on the house.  - Caleb Pershan
1101 Valencia Street between 22nd and 23rd Streets 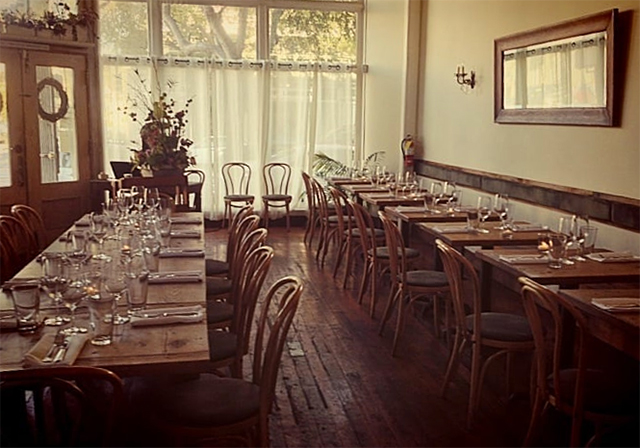 Heirloom Café
While chef-owner Matt Straus, who came to SF to open his Mission restaurant in 2010 after years as a sommelier in LA, did not try to create anything outright French at his Heirloom Cafe, his passion for wine and simple food infuses the place with the cozy sensibility of the world's best bistros. Always warmly lit from electric candle sconces, with creaky wood floors and some old jazz playing softly on the speakers, Heirloom offers a changing menu that often features California spins on classics like bouillabaisse, duck breast and confit leg, and housemade gnocchi. The bacon and onion tart has remained on the menu throughout, as has the popular off-menu Epoisses cheeseburger, in which the pungent cheese is actually blended into the meat  which is ridiculously delicious. Also, the $65 three-course prix-fixe with wine pairings is a steal.  Jay Barmann
2500 Folsom Street at 21st 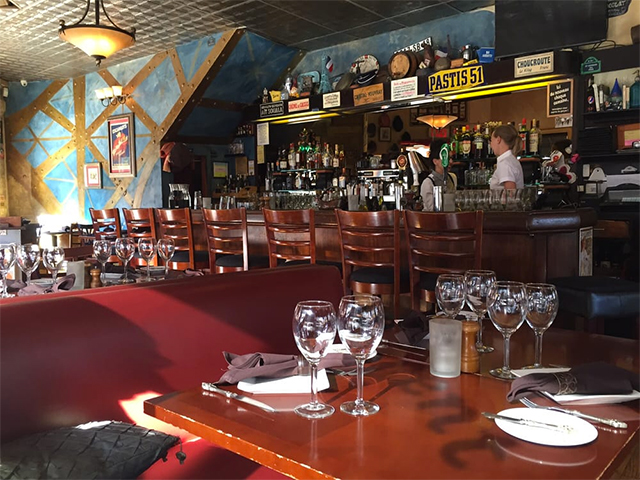 Le P'tit Laurent
Parisian restaurateur Laurent Legendre relocated to San Francisco in 1996 and opened his first restaurant here two years later, ultimately bringing this perennially loved spot to Glen Park a decade ago, and more recently opening Chez Marius in Noe Valley. In as tight-knit and sleepy a corner of the city as Glen Park is, this bistro serves as one of just a few go-to gathering spots for neighbors, along with Gialina and the dive bar Glen Park Station. Go for chef Julio Caceres's fine takes on cassoulet and moules mariniere, and don't miss the top notch creme brulée.  Jay Barmann
699 Chenery Steret at Diamond 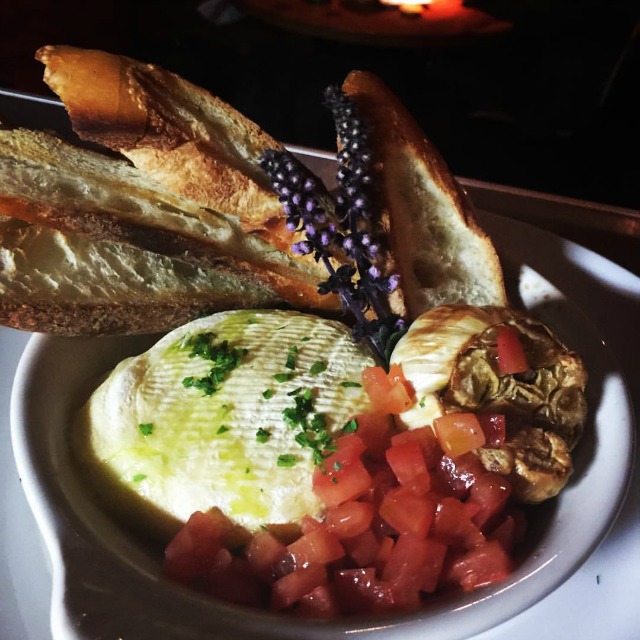 Revelry Bistro
Less than a year old (they opened in March, 2016), SF chef Brad Roth's Revelry quickly got a rep as an unpretentious little French-inspired joint with great service and an impressive wine list. With a menu that changes regularly, you're told to check their Facebook page to see what their current entrees are... however, that page rarely contains that information. Best to approach a night at Revelry like a trip back to the old days, before Yelp and MenuPages and endless Instagramming of oysters. Drink the wine, eat the delicious bivalves, repeat. — Eve Batey
297 Page Street between Laguna Street and Octavia Boulevard

Chateau Ubuntu, an intentional living community at 860 Fell Street, has been informed by the Planning Department that it's operating illegally, as the space is considered a three-family dwelling by the city, and

A protracted protest last night conducted by Greenpeace members who illegally took over a crane near the White House to make an anti-Trump political statement included several representatives from the Bay Area, the

—
The 10 Best Unsung Bistros In San Francisco
Share this