Chateau Ubuntu, an intentional living community at 860 Fell Street, has been informed by the Planning Department that it's operating illegally, as the space is considered a three-family dwelling by the city, and instead it's operating as a "millennial commune." According to the Examiner, there are technically three units in the building, and Planning says they must be occupied by one family each with no more than three people to a bedroom and no more than three roomers or boarders, or else a group of no more than five unrelated people per unit. 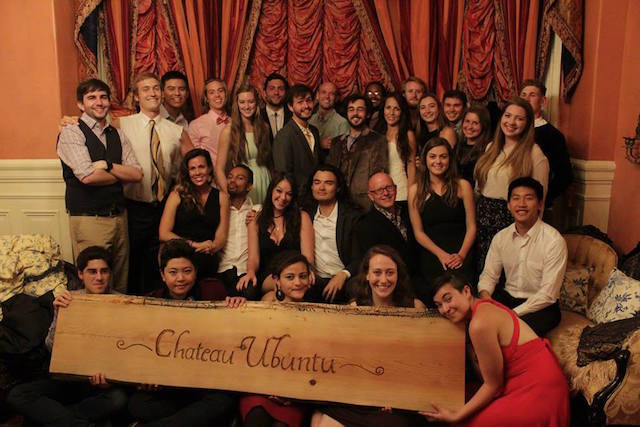 The living community has set itself up for a bit of mockery in the past, which we at SFist have indulged, based on some of their online materials, statements like "Ubuntu, originating from Africa, defines what it means to be truly human" and "when you live authentically - and you live and love with intention - you connect to your inner awesome, resonate your truth, and find yourself sharing that awesomeness with others."

Now, the good times and drum circles at Ubuntu are under threat. "The Planning Department requires that you immediately proceed to abate the violation by restoring the subject property to its authorized use as three dwelling units, each occupied by an individual family," reads the enforcement notice, as obtained by the Examiner. "If you wish to legalize the use of the subject property as a Group Housing site, a Building Permit Application must be filed for the change of use."

Wait, I've got it! As members of this community, where they eat and sleep together, aren't the residents of Chateau Ubuntu... family?

The Planning Code, as some hippie in the 48 Hills comment section also invokes it, might be on their side:

As regards a family unit, it's a: "single and separate living unit, consisting of either one person, or two or more persons related by blood, marriage or adoption or by legal guardianship pursuant to court order; plus necessary domestic servants and not more than three roomers or boarders; a group of not more than five persons unrelated by blood, marriage or adoption, or such legal guardianship unless the group has the attributes of a family in that it (a) has control over its membership and composition; (b) purchases its food and prepares and consumes its meals collectively; and (c) determines its own rules or organization and utilization of the residential space it occupies. A group occupying group housing or a hotel, motel, or any other building or portion thereof other than a Dwelling, shall not be deemed to be a family.

If the Ubuntu fam doesn't argue that successfully or isn't lucky with their application to switch to a group housing site, I for one, will miss their Attractive Millennial Instagram account.

Previously: Video: The Millennial Hippie Commune Of Your Worst Nightmares

The immigration crackdown has begun, and some ICE agents, possibly emboldened or directed by the new Trump regime, conducted a rare raid in San Francisco Thursday, descending upon the Good Samaritan Family Resource

In an age of destination dining, pricey prix fixes, and fusion cuisines that we don't call fusion anymore, it can be refreshing to return to a favorite local haunt. Whether it's the kind