The expensive Japanese trend continues with another early-in-the-year opener, Kinjo (2206 Polk Stret), which will be officially open on January 24 serving a $120 omakase menu designed nightly by former Sushi Ran head sushi chef, Takatoshi Toshi. Eater first had word on the spot's debut last week, noting that Toshi will be focusing on the Edomae style of sushi, which simply means the original, unadorned style of nigiri  raw fish over sushi rice  with no adornments or additives beside vinegar and salt.

Inside Scoop has a few more details, reporting that Toshi is partnering with Billy Kong and Kua Chuang, the owners of Ijji in the Lower Haight. 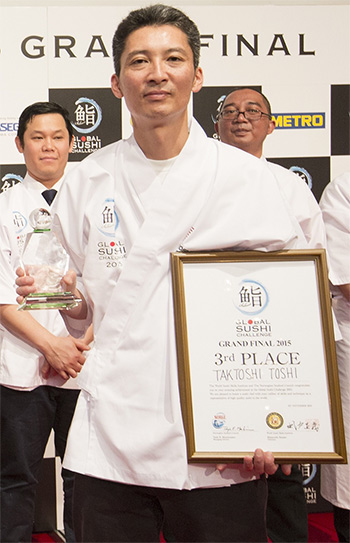 The space, a former antique store, will seat 42 people including at the sushi bar, and it's being designed by artist Michael Brennan, who's known for working with restaurateur Pat Kuleto in the designs of notable SF restaurants like Jardiniere and Farallon, and more recently at Zero Zero and House Rules.

Can SF support yet another destination sushi spot with a price point north of $100 after a two-year period that brought such notable spots as Omakase, Ju-Ni, and Hashiri? Toshi obviously hopes so, and he brings to the table a lot of accolades, including first place in the World Sushi Cup in 2014, and third place in the 2015 Global Sushi Challenge, in addition to earning a Michelin star during his 10 years at Sushi Ran.

Ooh la la! French startup founders Alain Thebault and Anders Bringdal, a duo who broke the record for speed on a sailboat they designed back in 2009, were speeding through San Francisco and

In a move his acolytes are sure to leverage as evidence of the politically-correct-to-the-point-of-intolerance, easily "triggered" left, the independent San Francisco bookstore The Booksmith announced on its website this week that it won't