Serena Williams wins, love to love! Although it wasn't long ago that the tennis star was linked to Drake, it seems she's found romance with a sexy techie: Alexis Ohanion, 33, an entrepreneur, activist, and the co-founder of the popular website Reddit. Williams, 35, announced their engagement, appropriately, on the subpage or subreddit, r/isaidyes, which she just created for people to share their engagement stories and to tell her own. That's here: 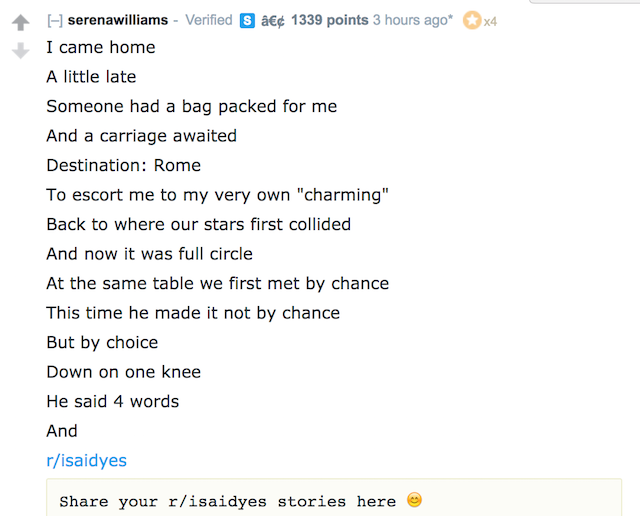 Us Weekly reported that Williams and Ohanian began dating in October 2015. "They met at a lunch,” according to a source, who clarified that her relationship with Drake was just a flirtation.

As Reddit is known, these days, as a terrifying cave of trolls, I confess I immediately had concerns about the responses that I might see to Ohanian and Williams' revelation. So far, they've been celebratory and polite, and therefore, presumably, heavily moderated. Some, of course, did border on the profane:

"WHY ARE YOU ON REDDIT ALL DAY IF U WITH SERENA" wrote user YungSnuggie.
"I WOULDNT EVEN OWN A COMPUTER MY FACE WOULD BE 4 INCHES DEEP IN BOOTY ALL DAY
WHAT ARE YOU DOING MATE
WHY DO YOU EVEN HAVE A JOB YALL ARE LOADED
MY MAN U GLO'ED THE FUCK UP ON ALL OF US
GAME RECOGNIZE GAME AND I SEE U OUT HERE MY DUDE U A LEGEND IN THE STREETS NOW"

Williams is scheduled to play in the Australian Open in January, the Mercury news writes. Ohanian was reportedly not a tennis fan before meeting Williams, but as she was not, at least I doubt, a big redditor before they took to one another, I expect that he'll be court side from now on.

A Texas family is suing Apple, alleging in a lawsuit that the company knew its FaceTime messaging service enabled distracted driving yet failed to take preventative steps to lock out users behind the

Earlier this week we caught wind that Quince had started serving a truffle dish atop iPads displaying a video of the dogs used for truffle hunting in Italy. Though this was not the