Just over a week after the company launched its self-driving service in San Francisco to much fanfare, Uber executives today ordered their autonomous Volvo SUVs packed up and shipped out of state to Arizona. The company plans to redeploy the vehicles on Arizona streets, and is no doubt looking forward to a warmer greeting than the one they received in San Francisco.

“Our cars departed for Arizona this morning by truck," the company said this afternoon in a statement. "We’ll be expanding our self-driving pilot there in the next few weeks, and we’re excited to have the support of [Arizona] Governor Ducey.”

It was only yesterday that Uber executives met with representatives from the California state attorney general's office and the DMV to argue the case that their self-driving vehicles are not technically autonomous and thus did not require DMV permitting. State regulators disagreed, and last night told Uber they had revoked the registration of the 16 cars — thus forcing Uber to cease its self-driving operation in San Francisco and precipitating today's announcement. 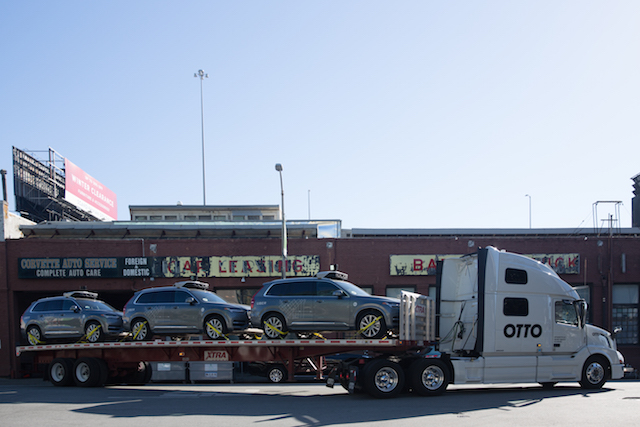 Interestingly, an Uber spokesperson confirmed to SFist that the Otto trucks pictured ferrying Ubers out of town are themselves self-driving vehicles, although it is unclear if that feature was engaged this morning.

The trouble caused by Uber's refusal to obtain permits for the vehicles was only exacerbated by multiple instances of the autonomous cars committing traffic violations. The company's decision to ignore Mayor Lee's demand that it cease operations on SF streets likely didn't help to cool things down.

A reporter with the Business Times took a ride in one of the cars before this morning's relocation, and noted that "the [human] driver often had to take over to navigate complex situations."

An inquiry as to whether Uber is in touch with the Arizona DMV was unanswered as of press time.

A JetBlue flight to San Francisco from New York's JFK airport is about an hour late this afternoon, a delay presumably tied to the hubbub in the plane's cabin this morning: A Hunter

A man accused of "a drug-fueled rampage" inside a North Bay school earlier this week didn't do much to defend himself in court this week, instead announcing that he was the Prince of