A former first lady of San Francisco in talks to be part of the Trump Administration? This is a topsy-turvy, upside-down world we are in, folks, and indeed the Chronicle has it that Kimberly Guilfoyle, who was Kimberly Guilfoyle-Newsom from 2001 to 2005 before relocating to New York and divorcing then Mayor Gavin Newsom, is at the front of the line to become Press Secretary for the Trump Administration. This is possibly a more thankless and soul-crushing job than KellyAnne Conway's, and yet the 47-year-old SF native is apparently considering it.

Politico broke the story that Guilfoyle had been spotted at Trump Tower to meet with the team, and they have it on some authority that though "Republican National Committee and Trump transition spokesman Sean Spicer is considered the front-runner" for the job, there are some on the transition team pushing for Guilfoyle because she's half-Puerto Rican and may seem "a more sympathetic face when flacking some of Trump’s more divisive stances on immigration and pro-life issues."

That of course is a disgusting and cynical detail, if it is true, but no doubt the President-elect wouldn't mind having another beautiful woman on the team, since beautiful women are his thing.

If Guilfoyle ends up landing the job, and in fact wants it, this would be a fine capper to the tale of Kimberly and Gavin. Lt. Governor Newsom has made no secret of his hatred and disrespect for Donald Trump, and indeed they are political opposites  but Guilfoyle has spent the last decade working for Fox News, the holy trumpeters of conservative propaganda and double-speak, lately as a co-host of The Five and Outnumbered, which are two of the most popular talk programs on the network. 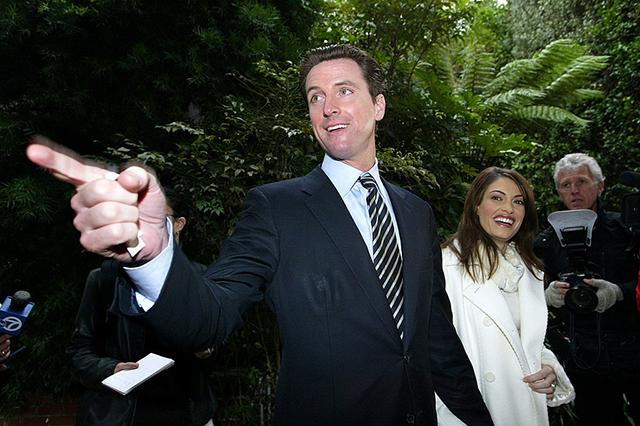 Back in 2007, when she had first joined the network, Guilfoyle chummily interviewed onetime Newsom rival Matt Gonzalez on The Lineup, a move that implied the divorce was not as amicable  and based solely on tensions surrounding her bi-coastal lifestyle  as was originally told to the press.

But how could Guilfoyle, born to a Puerto Rican mom and Irish dad in a San Francisco household, having worked as an assistant prosecutor for the most liberal city in the land, end up going to work for this president?

It could be that Ivanka and Jared Kushner are pushing for Guilfoyle, because as Politico notes, Guilfoyle "has a friendly relationship" with them, "as well as Trump’s chief strategist Steve Bannon."

Back in July, meanwhile, Gavin went on an epic Twitter rant during the Republican National Convention about the party's backwards stance on LGBT issues, and he continues to rail against Trump in daily tweets, post-election.

Once again Trump proves that he believes facts don't matter by appointing a man who doesn't believe climate change is real to head @EPA.

By ignoring the CIA & blaming this on Democrats being sore losers, Trump is prioritizing his ego & relationship w/Putin over our democracy. pic.twitter.com/HXdVZG7XFH

Trump's treating Russian interference in our election as partisan issue. This is not about political parties - our natl security is at risk.

.@realDonaldTrump this is not a partisan issue. The information leaked from the attack does not negate the fact that the attack occurred. https://t.co/gFEKdXmXOc

Meanwhile Newsom's current wife, Jennifer Siebel Newsom, is also leading a charge against the President-elect and the "culture of toxic masculinity" that has dominated 2016. Her group, the Respresentation Project, has just published a short on Facebook discussing this, "to help spark a national conversation about toxic norms and how we as individuals and a society can do better."

As friends, family, and the community at large continue to mourn those who perished in the December 2 Ghost Ship fire, KQED Arts has released a video honoring the dead. The video consists