In the hours after the deadly warehouse fire in Oakland Friday that claimed the lives of an estimated three dozen people in their 20's, 30's and 40's, a man thought to be largely responsible for the wooden interior structures and layout of the space spoke out on social media not to mourn the loss of the dead, but to bemoan the loss of "everything I worked so hard for." Now multiple sources say that 46-year-old Derick Ion Almena had brazenly flouted warnings from friends and city officials that his live-work and event space, which was home to about 14 people at any given time, was a ticking time bomb of safety issues waiting to explode. Also, TMZ has gotten in on the action reporting that Almena has an arrest record, and was on probation this year for receiving stolen property.

Almena's wife/partner is Micah Allison, and they have three children together, all of whom were staying with their mother at a nearby hotel during the party on Friday. Almena had, as the East Bay Times reports, been largely responsible for constructing the maze of artists' studios on the warehouse's ground floor, and the bohemian "rave cave," as it was nicknamed, on the second floor mezzanine, which was connected by a rickety stairway made out of wooden pallets  something that made both escape, and access by firefighters, nearly impossible as the blaze took off. "The whole place was wires and cables and wood," former resident DeL Lee told the paper, adding that Almena had "a fetish for wood."

It's unclear if at 1:30 a.m. Saturday, two hours into the blaze, Almena was aware that multiple people had perished in the fire and were unable to escape, when he posted the following to Facebook: "Confirmed. Everything I worked so hard for is gone. Blessed that my children and Micah were at a hotel safe and sound... it's as if I have awoken from a dream filled with opulence and hope.... to be standing now in poverty of self worth." It would appear, though, that several of his friends already heard that people were trapped and possibly dead. 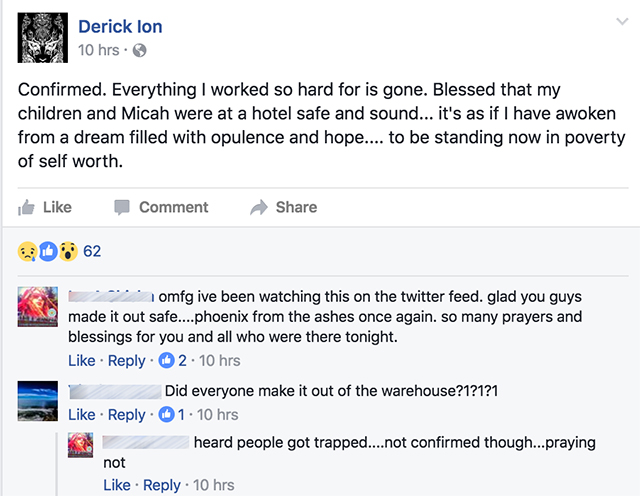 The internet has, naturally, excoriated Almena as news of the fire has made international headlines for being so seemingly callous and self-involved as to ignore the mass casualty and focus on his own home and artwork. And some of his own friends did as well, as the East Bay Express reported Saturday while the post was still live.

Another friend, whose note was spotted by the Daily Mail, said "ARE YOU SERIOUSLY POSTING ABOUT THE LOSS OF YOUR MATERIAL POSESSIONS (sic) WHEN YOUR DEATH TRAP MURRRRRRDERED OUR FRIENDS????? I WANT BARRETT AND JONATHAN AND JOEY BACK! F**K YO S**T."

Given the inevitable legal implications that will stem from this awful tragedy, Almena should think twice about leaving up that post (which is still live), with another friend saying, "You might want to not put posts like this up... legally you will be responsible and this will certainly slant a jury towards a lengthy prison sentence for your blatant disregard for humanity and human life."

One friend defended him, as the Daily Mail notes, saying, "Derick Ion posted this 10 hours ago. I do not believe he realized in that moment that others had died. Please do not be so quick to judge him. This is a time for healing, prayers & hope for the survivors."

The Chronicle reports that Ghost Ship and Almena's Satya Yuga collective date back about a decade in the East Oakland warehouse space, and had been the source of numerous complaints over the years. Remarkably, Almena and the other artists who lived there managed to fly under the radar all that time despite building inspections  and the AP reported that sub-tenants were told to say that it was a 24-hour artists' workspace, and to hide away clothes and bedding if inspectors came.

The daughter of the landlord, Eva Ng, told the Chronicle that as far as she knew, "no one lived there," however it appears Almena took over the place after landlord Chor Ng evicted another tenant in 2005 who had been paying just $500 a month for the warehouse.

A whistleblower in all this, with regard to the hazards of the building, was a neighbor and friend of Almena and Allison, Danielle Boudreaux, whose kids go to school with their kids. She says she had a falling out with the couple after alerting Child Protective Services as well as Allison's parents that the children were living in unsafe conditions. The kids were removed for six months, as the Chron reports, in early 2015, sent to live with their grandparents in Southern California, but returned by July 2015 and had been continuing to live there ever since.

Boudreaux says to the paper, "The police and Fire Department were there on more than one occasion. Multiple people warned Derick that it was a death trap. He would laugh it off. This tragedy could have been avoided if it were not for his arrogance."

It remains astonishing that if the Fire Department had seen this makeshift pallet staircase before they would have allowed it to stay, however it remains unclear what they were allowed to see at any given time in what's been described as a labyrinth and a "clap-trap pirate ship" of a space.

The East Bay Times reported Saturday that the building was actively under investigation by the city of Oakland and that building inspectors had cited the property for blight on November 13 due to illegal dumping on the street, and had returned on November 17 to inspect the interior, but were not able to get inside. Darin Ranelletti, Oakland’s interim director of planning and building, explained this at a news conference Saturday, but could not answer for why inspectors had then neglected to return or try again in the ensuing three weeks.

Two things are certain in this, as they are after any great tragedy that could have been preventable: 1) There are going to be a ton of lawsuits likely aimed at the city, the landlord, and Almena; and 2) It's about to become a lot harder to get away with makeshift, illegal dwellings in Oakland as a crackdown is pending.

Update: Reuters has a piece about warning signs at the Ghost Ship space, and suggests that the three children may have been removed from their parents' custody for well over a year, not just six months. They quote Almena's father-in-law, quoting his granddaughter complaining about her father's collecting habits. "She said my dad likes to collect a lot of junk, if he sees something on the side of the road we have to stop. She'd complain the whole house was full of junk.”

The East Bay Times has done their own brief profile of Almena, taking out of context a few things he said on Facebook in recent months, including calling himself "the thriller love child of Manson, Pol Pot and Hitler." Referring apparently to past drug use and mandatory drug testing because of the CPS situation, Almena wrote, "Addictions never admitted armed me as revolutionary as long as i seek help and healing, have current registration, pay my insurance, piss in a cup twice weekly  i can proverbally (sic) get away with murder."

A former neighbor described Almena in the last decade as having "a way about him like he was founding a new religion."

Previously: Official Death Toll In Oakland Warehouse Fire Rises To 24, Likely To Rise To At Least 35

Please scroll down for updates With 80 percent of the burned-out building left to search, the Alameda County Sheriff’s Office announced in an early morning press conference Sunday that a total of