With an estimated 70 to 100 people in attendance at Friday night's underground electronic music party at Ghost Ship in Oakland, and an estimated 35 to 40 dead, it is becoming increasingly possible that more people perished than survived in the blaze, which took four hours to get under control. The stories of witnesses and survivors who barely escaped with their lives are beginning to trickle in, and we bring you a few of them here.

Those interested in helping victims of the fire, particularly those artists who were displaced from their residences in the blaze, can donate to this crowd-funding campaign, which is being matched in part by the Oakland A's and Raiders organizations.

For reference, the East Bay Times has published a map of the Ghost Ship space here.

The Chronicle spoke Saturday with 24-year-old Laura Hobbs, who attended the party with five friends, and she says:

"The building itself was an art piece. The walls were completely covered with makeshift pieces of wood, so finding the staircase if you’d never been there before was difficult because they had built it into the wall in a certain way... There’s so much happening all over the building, so it’s hard to tell where the path is to anything. It all felt very cramped. The second floor was very much right on top of the first... I can’t imagine how long it’d take 40 people to get out, even in a calm situation."

Another partygoer, 25-year-old Adrian Lee, tells the paper that he and his two friends "didn’t see much smoke. It was just a plastic-ey, toxic, chemical-type smell." They started heading down the rickety stairs, but halfway down he says everything became obscured with thick smoke. They heard someone yelling "The entrance is over here!" and he and one friend made it through the maze and out this one of two exits. His other friend remains unaccounted for.

Redditor God_I_Suck posted the following harrowing account of his similar path out, although he ended up crawling blindly through the smoke and being saved by the same person shouting about the location of the entrance. He says of the first moment after the fire broke out, "I distinctly remember thinking that this probably wasn't a big deal and/or that it was maybe a prank." 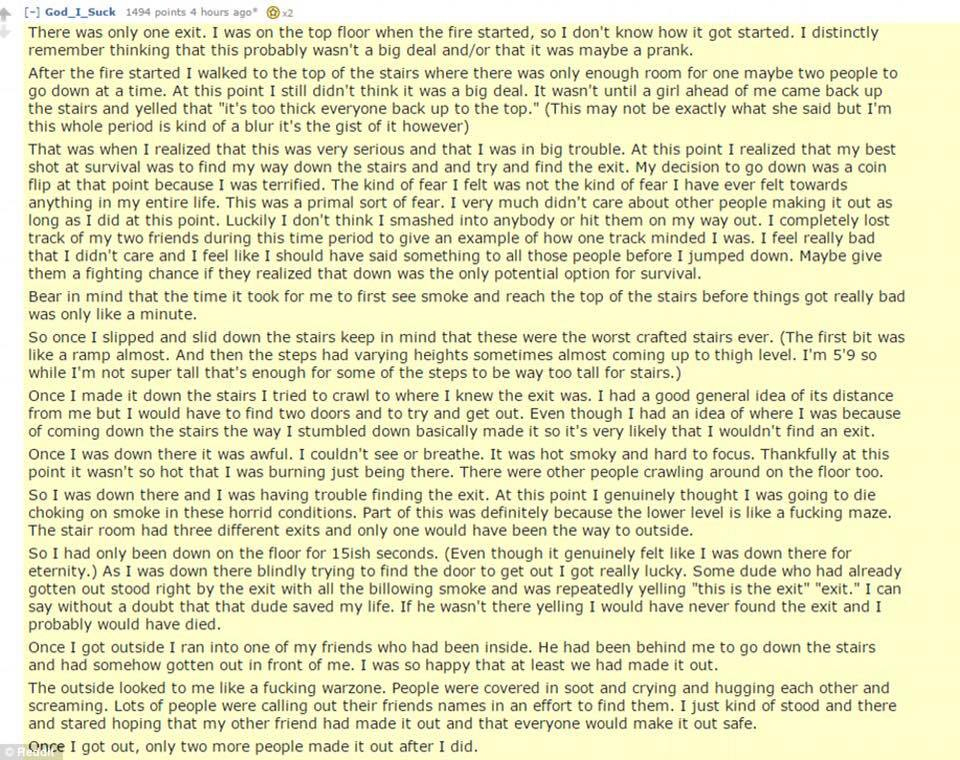 The "two more people" he describes escaping after him, who were the last survivors to escape, were likely the same two teenage boys described by a neighbor to the Chronicle as covered in soot and huddled in a doorway crying afterwards. "They said they couldn’t see anything  it was pitch-black. They said they were the last two to get out. The only reason they got out was they heard voices and followed them."

Another partygoer, 22-year-old Alastair Boone, described being in the storage lot next door to the building, having come out the only other exit, a side door, just prior to the fire. She tells the Chronicle that when someone shouted "Fire!" inside, she and several friends decided to squeeze out a narrow space in a fence gate to the street rather than try to exit out through the building. "We sort of reasoned that nobody was stuck because there weren’t that many people [at the party],” she says. “It’s so sad to think that as we were squeezing through the gate, there were people stuck upstairs.”

A local musician named Chris, who declined to give his last name, gave the following account to the East Bay Times:

Chris... said he was in the bathroom when the fire broke out. He walked out into a room filled with thick smoke. The lights had gone out and it was pitch black inside the warehouse space, where only a few moments earlier a group of 40 to 50 people were listening to a DJ play music and waiting for the show to start.

Immediately, people were screaming and trying to direct others to safety. With no lights, and smoke filling the warehouse, it made it difficult for people to find their footing on the somewhat irregularly shaped staircase, which Chris said appeared to have been built in three sections.

“We did that for as long as we could, but when you’re in a burning building, you’re being surrounded by a completely hostile environment,” he said. “It was kind of a free for all.”

Chris said he ran to his car to grab a flashlight and ran back into the building, crawling on his hands and knees, but he couldn’t get to the staircase or help move people to safety. The smoke, which he said hit him “like getting slapped in the face,” made it impossible for him to see or to breathe...

“I felt so helpless,” he said as he watched the firefighters douse the flames.

Bob Mule, a photographer who lived in the building, described escaping the fire to the East Bay Times, and being unable to help an injured friend as the heat and smoke became too intense. (The part about the friend is now removed from the story, but was in it on Saturday, and the Chronicle notes a similar story second-hand about someone who tripped on their way out that could have come from Mule.)

“It was too hot, too much smoke, I had to get out of there,” said Bob Mule, a photographer and artist who lives in the building and who suffered minor burns. “I literally felt my skin peeling and my lungs being suffocated by smoke. I couldn’t get the fire extinguisher to work.”

When he escaped, he could see someone calling for help from the second-floor window, and tried to get a ladder, “but they jumped out the window.”

Seung Lee told the East Bay Express that he was outside when the flames broke out. "It was a tinderbox. I heard the word ‘tinderbox’ used over and over afterward. This was probably the fastest, most largest, most furious fire I’ve seen in my life. It was just relentless, I don’t recollect [seeing] anybody coming out.”

Previously: Official Death Toll In Oakland Warehouse Fire Rises To 24, Likely To Rise To At Least 35

Please scroll down for updates With 80 percent of the burned-out building left to search, the Alameda County Sheriff’s Office announced in an early morning press conference Sunday that a total of