Stoking the flames of conservative rage, conspiracy theorist exasperation, and Trump supporter ire, Reddit CEO Steve Huffman admitted Thursday to secretly editing a series of comments attacking him in the r/the_donald subreddit. And now both a group of longtime Reddit moderators and the frequenters of r/the_donald are royally pissed at Huffman, with good reason, and he's issued a public apology.

Via Gizmodo we get Huffman's mea culpa, in which he says, "As the CEO, I shouldn’t play such games, and it’s all fixed now." But he also adds, "As much as we try to maintain a good relationship with you all, it does get old getting called a pedophile constantly."

If this all sounds childish and impertinent given the broader implications of Donald Trump's election, then perhaps you underestimate the power that social media had in rallying Trump's supporters over the last year, and the power that places like Reddit had in fomenting conspiracy theories and giving voice to some of the most alt of the alt-Right. And as The New Statesman explains, deleting or altering comments without leaving a trace, as Huffman did, is something that suspicious users have long accused moderators at Reddit of doing  and the implications could actually be grave given that one Redditor in England was taken to court and fined over a comment of his that was deemed offensive and hateful, regarding a black teenager who died in police custody. (Comments that have been edited or removed by moderators on the site typically have an asterisk next to them and a note about their removal.)

The thread that Huffman edited was one in which members of the r/the_donald community were personally attacking Huffman, whose username on the site is "spez". Most of the comments were just saying "fuck spez" or "spez is a cuck," all in response to a post announcing the shutdown of another subreddit, r/pizzagate, in which users have spent weeks discussing the debunked conspiracy theory about a DC pizzeria being connected to a child sex trafficking ring involving Hillary Clinton. You can see the original thread here, with all the "fuck spez" comments intact. Here you can see the apparently altered version, with one of the_donald's moderator's names inserted in place of spez.

The users, obviously ardent Trump supporters but also fans of conspiracy theories who refuse to believe that pizzagate isn't a thing, accuse Reddit and Huffman of "defending pedos" and enabling pedophiles by shutting down the forum in which they, these Redditors, believe they were trying to bring this scandal out into the open.

A longtime moderator leaked a series of Slack chat logs, picked up by Gizmodo, in which moderators inside the Reddit machine were discussing Huffman's actions, all agreeing that site rules were not consistently enforced over the last year, especially when it came to the out-of-control nature of r/the_donald. Most sound exhausted with the thankless task of having to police this particular community over the last year  made up of a number of people who have been kicked off of Twitter for their abuses, as The New Statesman notes. 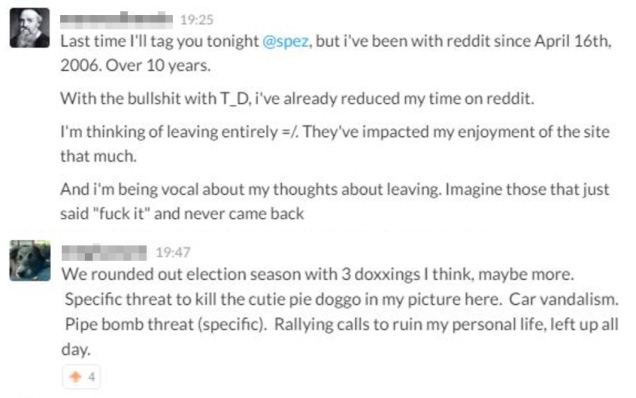 
There was an obvious consensus: the members of the_donald break site rules constantly, harass moderators, threaten people, and get away with it. But as Mannoslimmin points out in that chat, “However difficult it was [to contain the_donald] before today, it’s a fuckload more difficult after what spez did today.”

Is the fracturing of the Republican party, conservative anger at the world, and our post-factual age going to lead to the undoing of Reddit the way it's causing internal strife at Facebook and chaos on Twitter? Are such things just inevitabilities of our time, and the consequence of allowing spaces where users are able to share their uncensored thoughts and unfounded theories?

It's been over a year since Ellen Pao stepped down as Reddit CEO amidst an uproar over this very issue, and her efforts to shut down the trolls and curb abuses on the site. Her thoughtful open letter after all that controversy, from July 2015, seems almost quaint now. "In the battle for the Internet, the power of humanity to overcome hate gives me hope," she wrote. "I’m rooting for the humans over the trolls. I know we can win."

As of now, humans are losing.

Save up to 88% on this killer lineup of premium electronics, minus the 4am campout. If you love Black Friday deals, but hate the carnage associated with playing tug of war for them

Warren Beatty has been wanting to make a movie about Howard Hughes since the 1970s, and it's no wonder why he felt an affinity for the eccentric billionaire. Both Beatty and Hughes were