A tall, sleek glass office tower slated for 1100 Broadway, at 12th Street, in downtown Oakland will not be breaking ground anytime soon as its developer has yet to secure an anchor tenant who wants to lease at least half of the building. The 20-story project, approved back in 2008, would go into a long-vacant property across the street from Clorox headquarters, and in fact the developer has talked to Clorox about leasing some space, though they have apparently declined. As Socketsite reports, discussions with Uber, Levi's, and Salesforce have also gone nowhere.

The building site, shown below, would be next to the historic Key System building at 12th Street, which sustained damage in the 1989 Loma Prieta quake. The new development would include renovation and historic reuse of that building. 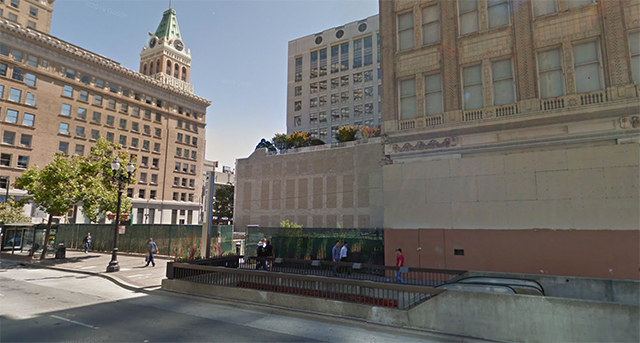 The 320,000 building was designed by KMD Architects, and it's expected to be certified as LEED Silver at a minimum, according to a fact sheet from the developer.

Socketsite now reports that the developer is seeking an extension on their entitlements for the property, which were set to expire this year, because the Oakland office market has not yet proved robust enough to begin construction without an anchor tenant secured.

A captain on a United flight out of SFO was apparently forced to make a plane-wide announcement following a racist encounter onboard, apparently related to the election of Donald Trump. Details are few,

The principal of Milpitas High School was placed on leave this week following the release of video showing him yelling "fuck Donald Trump" at a school-wide assembly. As CBS 5 reports, the popular