Scroll to the bottom of this post for updates.

After years of construction and numerous delays, the Bay Bridge bike path is finally set to open this Sunday. Probably. KQED News reports that while bridge officials are keeping mum, two signs point to the bridge opening on October 23 — one of which rather definitively.

The bike path connecting the East Bay to Yerba Buena Island is already done, as we already knew. Officials, however, have delayed opening it due to conditions on the island — not because of any problems with the path itself. Although that is not why the sleuths over at KQED think this Sunday is the date.

First, and perhaps less convincingly, bridge officials have said they plan to open the bike path connection by the end of the month. They've made promises like that before, and so it is best to take such words with a grain of salt. And next weekend — the one right before Halloween — would still be before the end of the month. The second, and much more solid clue, is an official Bay Bridge calendar (see below).

According to the legend, the green dates are dates the bike will be open to the public. The first date with the green color code is this Sunday. And while, if accurate, that's awesome news, the calendar also brings to light a serious bummer for cyclists and pedestrians hoping to finally make the crossing — the path is set to be closed on weekdays through spring of next year.

“The Bay Bridge bike path will be open on the 2-mile long bridge this winter on weekends and holidays from Oakland to the YBI landing from 7 a.m.-6 p.m, and closed weekdays due to adjacent old east span bridge demolition construction work activities,” the calendar reads. In other words, any Treasure Island residents dreaming of biking to work in the East Bay still have quite the wait in front of them — regardless of this weekend's maybe opening.

Now officials just need to get to work on the western span bike path, which we should see sometime before we're all dead, maybe.

Update: Caltrans just sent out a press release confirming that the bike path will indeed open this Sunday "around noon."

“Opening this bicycle pedestrian path to Yerba Buena Island marks an important milestone for making this a true, multi-modal transbay corridor,” Caltrans District Director Bijan Sartipi explained in the press release. “This important milestone helps bring greater focus to the next phase of reaching San Francisco by cyclists and pedestrians.” 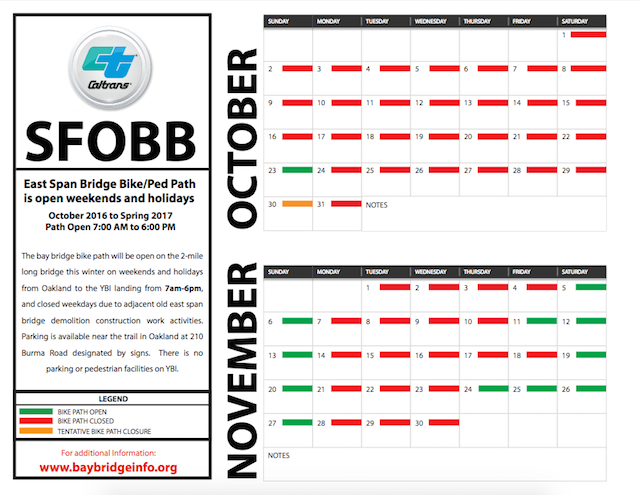 There will be none of the usual tailgates on frat row today before UC Berkeley takes on Oregon in football this weekend: Following two reports of sexual assaults at separate off-campus fraternity events