The Van Ness Bus Rapid Transit (BRT) project is facing what appears to be an end run opposition by preservationists and Supervisor Aaron Peskin, just ahead what should be the project's groundbreaking this fall. Peskin has a new resolution, which may be going before the full Board of Supervisors at their Tuesday meeting, "urging the San Francisco Municipal Transportation Agency to make all efforts to preserve the historic character of the Van Ness Corridor through reuse as well as replication of the Van Ness Avenue historic streetlamps." It's unclear to what extent this resolution could delay the project further  the BRT effort on Van Ness dates back a decade now, and isn't expected to be complete until 2019.

The resolution refers to both historic trolley poles and streetlamps on the corridor, which date back to 1915 when a major streetcar route came to Van Ness in preparation for the 1915 Panama Pacific International Exposition. It describes the Beaux Arts poles and lamps as having "graceful ironwork brackets," and the preservationist set notes that in a 1982 architectural survey conducted by San Francisco Heritage, the trolley poles and lamps were given a level B grade indicating their "major importance."

To be clear, these are the poles we're talking about, like the one pictured below. 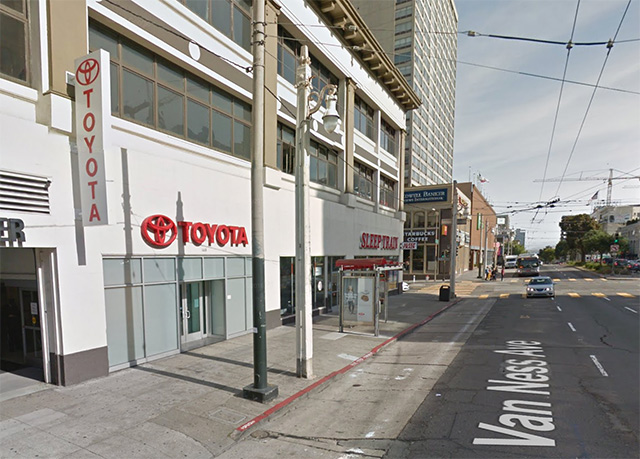 As the Examiner reported back in January, the reconfiguration of the corridor is going to require the removal of 193 mature trees along the central median, in addition to the 259 historic trolley poles  which are made of concrete and were once closer to the central median before a street-widening project in the 1930's. The BRT will create two designated bus lanes up the center of the street, removing the two center lanes of vehicle traffic, with each having its own median station stops at nine locations: Market, McAllister, Eddy, Geary/O'Farrell, Sutter, Sacramento, Jackson, Vallejo, and Union Streets. The consolidation project to remove the other stops for the 47 and 49 bus lines already began earlier this year.

The trees have been there since the 1950's, when the streetcars were removed and replaced by a median and two more lanes for cars.

Per the Ex, the Historic Preservation Commission issued the SFMTA a conditional “certificate of appropriateness” last year, asking them to preserve four of the historic trolley poles near City Hall, but both agencies agreed that the concrete polls are crumbling and need to be recreated in some fashion.

Hoodline adds that while a group of 33 lamps and poles fall within the Civic Center Historic District and therefore need to be preserved, there's been some vagaries around how many actually will be, because of a 2009 study that concluded that most of them "lacked sufficient historic and structural integrity" to deserve historic status.

The latest resolution caught the attention of transit advocate Eric, a.k.a. Militant Pedestrian on Twitter.

Opponents of #VanNessBRT just will not relent, and they have the ear of "progressive" Peskin. cc @SFTRU https://t.co/TZSDr3S89K

Unfortunately, when a supe meddles in a particular Muni project, the result is more often than not to the detriment of good transit.

According to the resolution, "The Van Ness Avenue Historic Streetlamps have been nominated to the National Trust for Historic Preservation’s 2016 list of 'America’s 11 Most Endangered Historic Places' to be nationally announced in October 2016."

The project has faced opposition from Chinatown, and from business owners on the Van Ness Corridor, while it has been championed by transit advocates as the first of what should be several such projects in the city, including a BRT project planned on Geary.

The new iPhone 7 and iPhone 7 Plus have been out for just three days now, and already some early adopters have begun to report that all is not right with their shiny

The alphabet-busting roster of San Francisco ballot propositions voters will decide on November 8 have made for a massive information pamphlet, the booklet every registered voter will receive by mail in advance of