With the embargo lifted this morning, all the tech writers who got first crack at playing around with the new iPhone 7 and iPhone 7 Plus models announced last week have let loose with their thoughts. According to established protocol, everyone is expressing their undying love for Apple in their descriptions of the new phones, though a few critics are a bit more reserved in their praise.

Mostly everyone is incredibly relieved with the new water resistance  critics report that running phones under faucets and even dropping one in a pond didn't kill it  and mostly they say they can get used to the loss of the headphone jack  even though this would make charging with an external power supply and listening to music at the same time on a subway a new challenge, requiring some new dongle.

There's some resistance to the new sold-state home button, though, which isn't actually a button anymore, and creates some kind of unsettling buzz when touched.

And that jet-black model? It's highly scratchable.

Let's start with the gushing:

"They’re they best, fastest, strongest iPhones yet. They also indicate, nine years into the iPhone experiment, that we’re nearing some platonic ideal of a smartphone, the device in its final minimalist form... the iPhone 7 won’t blow your mind with its design or features. It’s still a fantastic phone. And philosophically, it feels like Apple is throwing open a door. The iPhone 7 might not be a revolution, but it might be the catalyst for lots of them."  David Pierce, Wired

"The iPhone 7 is seriously water resistant; putting it under a faucet for a few minutes merely muffled the speakers and made the touch screen stop working until I dried it off. It's got louder speakers, a brighter screen and, in the larger 7 Plus, a second camera lens — a low-powered but useful zoom."  Anick Jesdanun, Associated Press 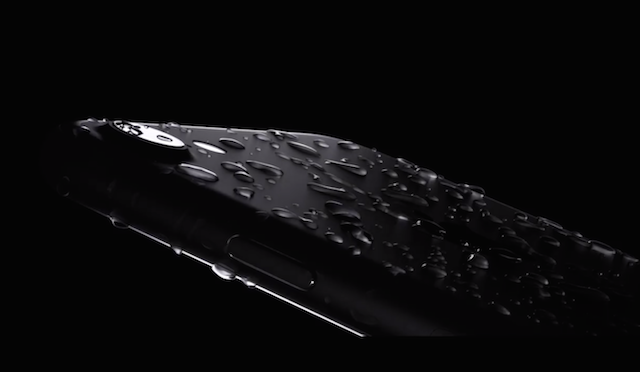 "The iPhone 7 and 7 Plus are tremendously fast  more than double the speed of the two-year-old iPhone 6  and their cameras produce superb, vivid photos."  Brian X. Chen, New York Times

"Think of it as the anti-anxiety iPhone. Ponder for a moment the many ways Apple has elevated global blood pressure over the past decade: We beg, borrow and steal chargers for our depleted iPhones. There’s terror in getting these delicate rectangles anywhere near water.... Over the past five days, I have squeezed an hour-and-1/2 more battery life out of the 7 and 7 Plus in brutal tests. I dropped an iPhone 7 in a pond, and it survived! And I’ve managed to snap more than a few after-sunset photos I’m actually proud of. That’s how I spell relief!"  Geoffrey A. Fowler, Wall Street Journal

But even the gushing praise comes with some caveats and reservations:

"These benefits would make the iPhone 7 the best smartphone of 2015. Last year is when Apple should have put it on sale. Now Apple’s just playing catch-up to Samsung , which added an equivalent camera and waterproofing to its Galaxy S7 six months ago."  Geoffrey A. Fowler, Wall Street Journal

"The iPhone 7 Plus can’t match a truly professional-level camera, but I’ve gotten more detail and richness from my photos than I can ever remember getting off a smartphone."  David Pierce, Wired

"If you're an iPhone user, it may depend on how long you've held onto your current iPhone. If you're a proud owner of the iPhone 6S or its plus-sized cousin, you probably don't need to rush out for the 7."  Anick Jesdanun, Associated Press

"Apple’s iPhone, just short of 10 years old, has hit puberty. Like adolescents coping with awkward changes to their bodies, the iPhone 7, due for release on Friday, introduces some uncomfortable transitions."  Brian X. Chen, New York Times

"You’re not totally out of luck if you have a big investment in corded headphones, but you’re going to want to stock up on those adapters if you regularly plug your phone into a car or have a variety of headphones you like to use  the dongle is small enough that it’s not obtrusive, but also small enough so that it’s destined to get lost if you move it around a lot. At $9, the headphone dongle is the cheapest Apple hardware you can buy; the company thinks people will just buy a few and keep them permanently attached to older headphones.”  Nilay Patel, The Verge

“But I cannot, for the life of me, get used to the iPhone 7’s new home button. It’s not a button anymore, just a capacitive surface that uses haptic buzzes and taps to provide feedback. That’s great for the longevity of your phone, since the home button tends to break before anything else  But when I press to unlock my phone, my thumb vibrates like it’s about to dent the glass. It’s not like it ruins the phone, but I miss the click.”  David Pierce, Wired

"After just five days  more than half of which I’ve spent using the matte black iPhone 7 Plus  this jet black iPhone 7 has a few ‘micro abrasions’, to use Apple’s own term. I can only see them when I’m looking for them, and only when I reflect light off the surface at the perfect angle, but they’re there. This is after two days of careful use, and never putting it in a pocket that contains anything else." Jon Gruber, Daring Fireball

"So let’s talk about the other reason you might actually consider skipping the iPhone 7  the death of the headphone jack. Apple really blew it when it explained this. The iPhone 7 still comes with corded earbuds, but they plug into the Lightning port now instead of the old round plug, and the box comes with an adapter so you can use your old headphones. There’s one big downside: You can’t plug in headphones and the charger at the same time unless you buy another strange adapter  for $40!"  Geoffrey A. Fowler, Wall Street Journal

"Getting rid of the most ubiquitous port in audio technology means that consumers are going to spend more money on adapters and accessories and Bluetooth stuff in the short term, which sucks, given that these damn rectangles with rounded corners already cost a fortune. But in my experience so far, there have been few repercussions and I generally think everyone needs to calm the F down."  Nicole Nguyen, BuzzFeed

And there's a benefit to the new lighting-port-connected EarPods:

"The new EarPods even have a small (albeit marginal) added benefit. The Lightning connection feels more secure than the old audio jack did: After the phone fell into the “& Beyond” crack between my bed and the wall, the EarPods’ cord saved it from hitting the floor, which felt like sweet, sweet victory. A very unscientific bounce test confirmed their superior strength."  Nicole Nguyen, BuzzFeed

The city of Oakland is asking for community feedback on the process of finding a new police chief. [KRON 4] Fifteen-unit apartment building at 530 Baker sells for $6.7 million. [The Registry]

by Daisy Barringer A lot of people celebrate the new year on January 1st, but for football fans, we know the real new year starts the first week of NFL football. Finally, the

—
The iPhone 7 And 7 Plus Reviews Are In, And They're Mostly Good
Share this