The crosswalks at 18th and Castro, installed with bright rainbow stripes made of inlaid colored asphalt two years ago this month, are getting regraded and repaved tonight in preparation for a re-rainbowing next week, on September 19 and 20. Hoodline has the details, and work began last night with the crosswalks getting a series of numbers spray-painted on them. 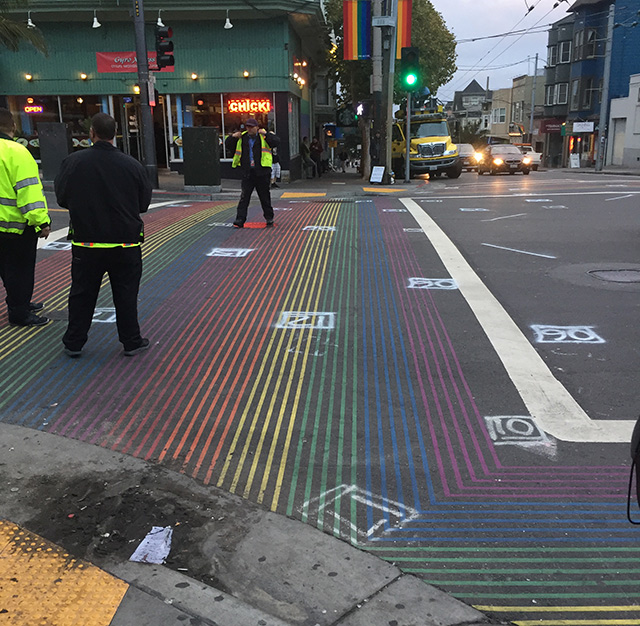 Apparently, there was an additional issue with the crosswalks as installed that needed to be addressed, on top of the cosmetic damage done to them during the filming of When We Rise back in May: There had been drainage problems at the intersection ever since the crosswalks were installed, and the original contractor is addressing the problem as it was still under warranty.

The damage was caused when adhesive used by the When We Rise crew to help cover over the crosswalks  in order to replicate the intersection as it would have looked in the 1970's  left behind a lot of black gunk that couldn't be cleaned with a power washing. The production did pledge, however, to foot the bill for the replacement.

After the regrading and drainage stuff is done this week, fresh rainbows will appear in all four crosswalks as of next Wednesday, September 21.

The regrading and replacement work, which continues tonight, Tuesday and into Wednesday morning, may disrupt, or at least slow Muni buses on Castro and 18th after the 7 p.m. hour.

The plot thickens. In a press conference this afternoon picked up by the Business Times, Supervisor Aaron Peskin spoke to the ongoing controversy surrounding the tilting and sinking Millennium Tower and suggested that

The last thing Justin Liszanckie remembers of his bike ride on July 19 is heading west on Brannan to turn south on Fourth. "It wasn't until a few hours later, getting my ear

—
Castro Rainbow Crosswalks Getting Replaced Next Week
Share this