The jumbo 747 that was originally intended to make it to Burning Man last year, is now, actually, slowly making its way from Mojave in Southern California to the Black Rock desert in Nevada on some roads and highways where it will be causing some traffic backups along the way.

As creators Big Imagination Foundation announced via Facebook, the plane parts began their journey to the playa Monday morning, and the Reno Gazette-Journal picked up the story today, noting that the plane's exact route hasn't been made public. We know that the plane left Mojave heading north on State Route 14 yesterday morning, and Route 395 seems like a likely candidate  but note via the videos below, the front main fuselage of the jet takes up almost two full lanes, and will be accompanied by police escorts.

Big Imagination said from the beginning on their Indiegogo campaign, "By far the largest expense of the project is transportation." They originally estimated they would need $240,000 to deconstruct, transport, and reconstruct the jet as a fully mobile art car, and for this year's Burning Man they decided to do a less ambitious Phase 1 instead, taking parts of the jet to use as an installation which is not on wheels. They've removed the tail section of the plane, as well as the lower fuselage, and are transporting mainly the cabin sections, for which they've raised $75,000 of their $79,000 stretch goal.

As organizer/engineer Ken Feldman told SFist a couple months ago, the ultimate plan will be to bring the functioning art car to the playa in 2017.

Right now, they're aiming to get the 747 to the playa by this Friday, and this was an initial rendering of what they said it might look like inside, once in place and assembled: 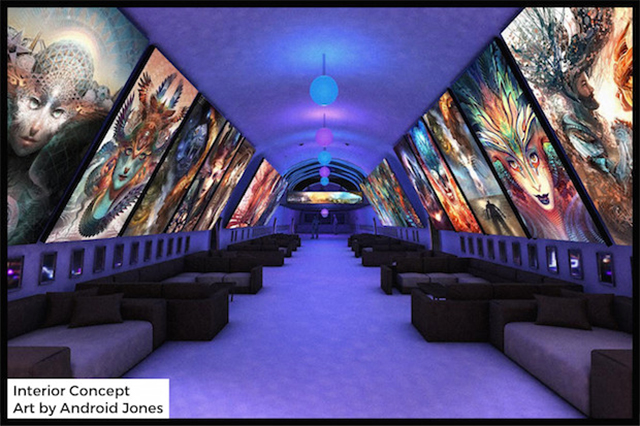 The 1985 Boeing 747 is being escorted by a motorcade of highway patrol cars, multiple pilot cars and several chase cars. The plane, which is 75 feet long, 22 feet wide and weighs 30,000 pounds, passed through Bishop late Monday night and is expected to pass through Hawthorne and Gerlach before arriving on the playa.

Below, video of the motorcade's slow progress from yesterday and today.

On the afternoon of August 14, 2006  a Monday  17-year-old Aubrey Abrakasa was leaving his mother's home in the Western Addition and headed to his job as a youth counselor at a park