On the afternoon of August 14, 2006  a Monday  17-year-old Aubrey Abrakasa was leaving his mother's home in the Western Addition and headed to his job as a youth counselor at a park in Bernal Heights when he saw a car speeding south down Baker Street.

Whether Aubrey  who was about to start his senior year of high school, where he played basketball and was known to stay out of trouble  knew the people in the car or not, nobody alive knows (or if they do, they have not or will not say). What is known is that Aubrey knew they meant trouble.

"Run!" he shouted, turning away from the car and fleeing himself. Those were his last words. Gunfire erupted from the car, at least 30 rounds. In front of a preschool at the corner of Baker and Grove, and Aubrey was shot 12 times in the back. He died a few hours later at San Francisco General Hospital. Though it was the middle of the day and there were people out in the streets, bystanders as well as the shooters' intended target and whoever was in the car  the driver, the shooters, the witnesses  all made safe away. They have never been found. A decade later, Aubrey's murder is still unsolved  and it's a case that SFist reported on way back then but has been largely forgotten.

Aubrey's mother, Paulette Brown  who still lives in the same house she shared with her son, just a few blocks away from where he was killed  has dutifully retold the story of her son's murder every Wednesday at the San Francisco Police Commission, where she reminds the civilian commissioners and the police chief that it remains unsolved. Brown also performs the same memorial ritual every August, marking the latest anniversary of her son's unsolved homicide with a quiet vigil at the fatal corner.

On Friday, Toney Chaplin, the fourth police chief Brown has shamed in this way, marked the tenth anniversary of Aubrey's death in a different way. Chaplin revealed more information than ever about the shooting, naming the Western Addition street gang  Central Division Players  he believes was behind it. ("And this cannot be stressed enough: Aubrey was not a gang member," the chief said.) This year, the police also have a new detail assigned to cold cases. From this, Chaplin has assigned two homicide investigators the Aubrey Abrakasa murder as their top priority, including the detective who is also assigned to the still-open investigation into the Zodiac killer. 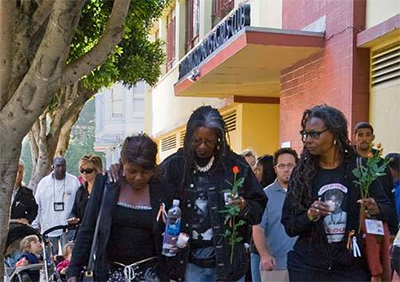 "We know someone saw something," the chief said on Friday, reading from a script as he stood on the corner where Aubrey died. "To the people who took Aubrey from us, from his mother, know this: We are the SFPD. We are tireless, we are relentless. We will never waver in our pursuit to bring justice to Paulette for the death of her son, Aubrey. And I can tell you this," the chief said, looking up from his notes to break from his script. "Paulette will not let us waver."

Speaking to the television cameras assembled for the event, Brown herself showed more hope than usual. Having the chief personally assign two inspectors to the case as their top priority, "This is the first time in ten years that I've heard that," she said, as the inspectors themselves  Jim Spillane, a 39-year veteran of the SFPD, and Gianrico Pierucci, the dapper suit-and-fedora-clad figure whose plate also includes the Zodiac  stood by stone-faced.

Progress in made in cold cases in one of two ways: new evidence or new witnesses. New evidence in cold cases usually comes from DNA testing, and in that Chaplin seemed to put the most stock. DNA from offenders nationwide is now entered into a national database, and DNA collection methods have improved over the past decade. It could be the killer is already in custody; maybe new DNA would be the key. "We'll see if science can help us put this thing over the finish line," the chief said.

For his part, Spillane is leaning towards witnesses. "I don't hold out great hope for DNA in this case," he said. The chemical reaction caused when a bullet is fired rubs away the oil and sweat from fingerprints; the assailants themselves weren't known to have dropped a shirt, handkerchief, or anything else after shooting Aubrey.

"This case is going to be made by someone coming forward," he said, repeating the line said earlier by the police chief and Paulette Brown that with the passage of time  and perhaps with having children themselves  someone's conscience, even the conscience of a killer, could become too heavy. "There were plenty of people around, there were plenty of witnesses."

Of course, not all of the people who lived in the Western Addition in 2006  back when the Divisadero corridor had barbecue joints, appliance repair shops, and vacant storefronts, not the bakery that started the infamous conversation over $4 toast  are here now. "It will require some travel," Spillane admitted. Pierucci described the process like this: following up on every tip, knocking on doors, getting people to remember something  but something specific, like a name or a description. And if a door is slammed in his face or a phone call hung up on? "There's nothing you can do," he said.

At least one person who was there still lives in the neighborhood. A man in his mid-40s who came out for the press conference says he was on Grove closer to Divisadero when Aubrey was shot. He heard the shots, he said, but didn't see anything, he told a few television reporters. When asked his name, he identified himself only as Bill  "short for Billion," he told television reporters, "that's what they call me."

Police often complain about "snitching culture" sabotaging investigations. If, a decade later, people who were on hand for the shooting don't want to give a TV crew their real name, how much hope is there for someone to give a signed and sworn statement to police? 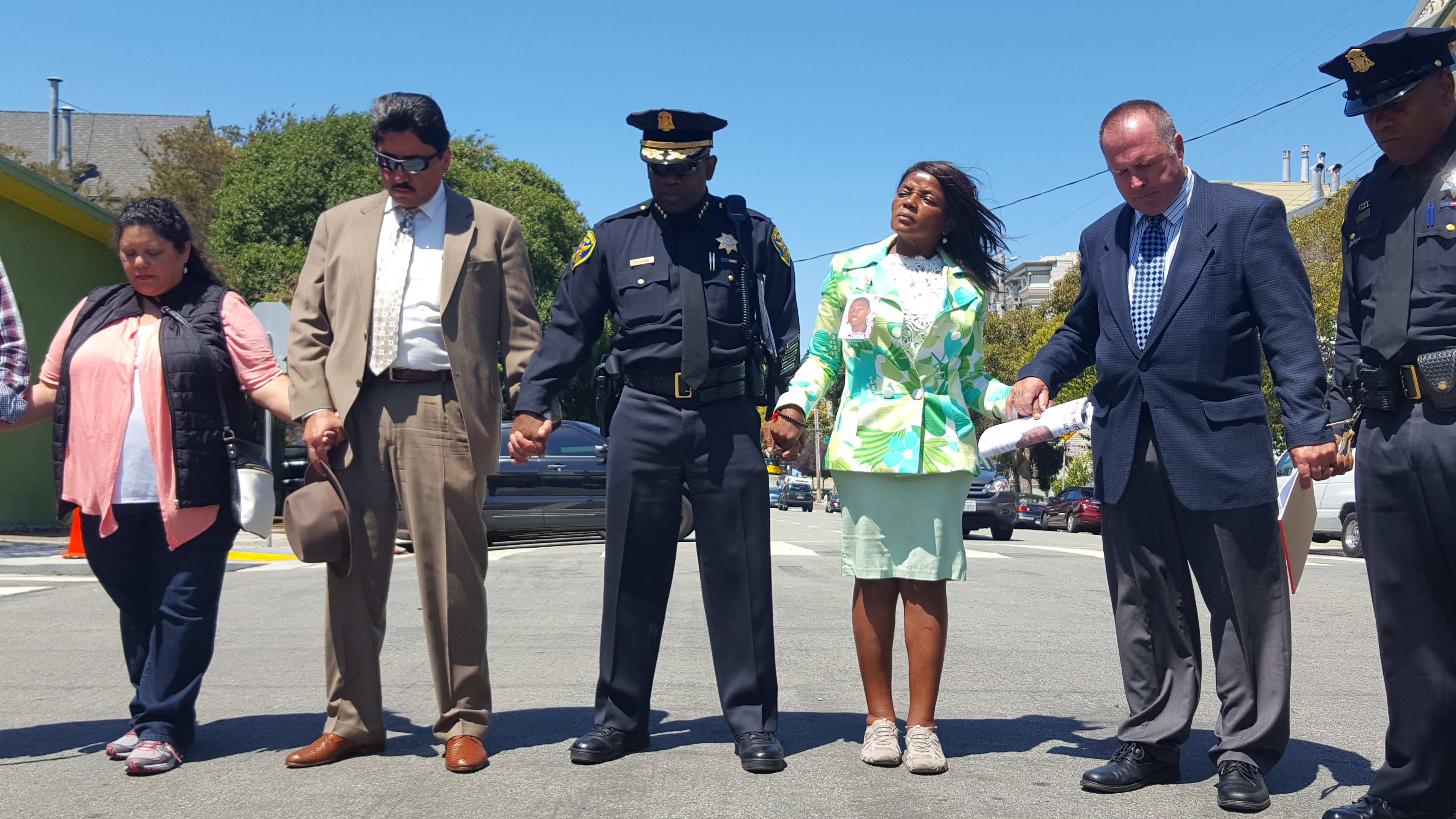 Following a prayer circle, in which the chief, Paulette Brown, and the two homicide inspectors linked hands to plead for a break, the annual ritual began to break up. Supervisor London Breed, who grew up in the area in the more violence-prone 1980s and 1990s, stayed behind to chat with Brown and other mothers of homicide victims like Mattie Scott. Scott's son was shot and killed in 1996. His murder is also still unsolved.

On the corner, next to the light pole on which pictures of Aubrey and advisories of the $250,000 reward for information leading to an arrest in his case were posted, was a well-worn poster that travels wherever Brown, Scott, or other mothers of murder victims go to agitate and plead police to do something. During the press conference, Spillane could be seen staring at it. On it are the pictures of twenty murder victims, all black and Latino, most of them dead for ten years or longer.

Arrests have been made in only two of those cases. 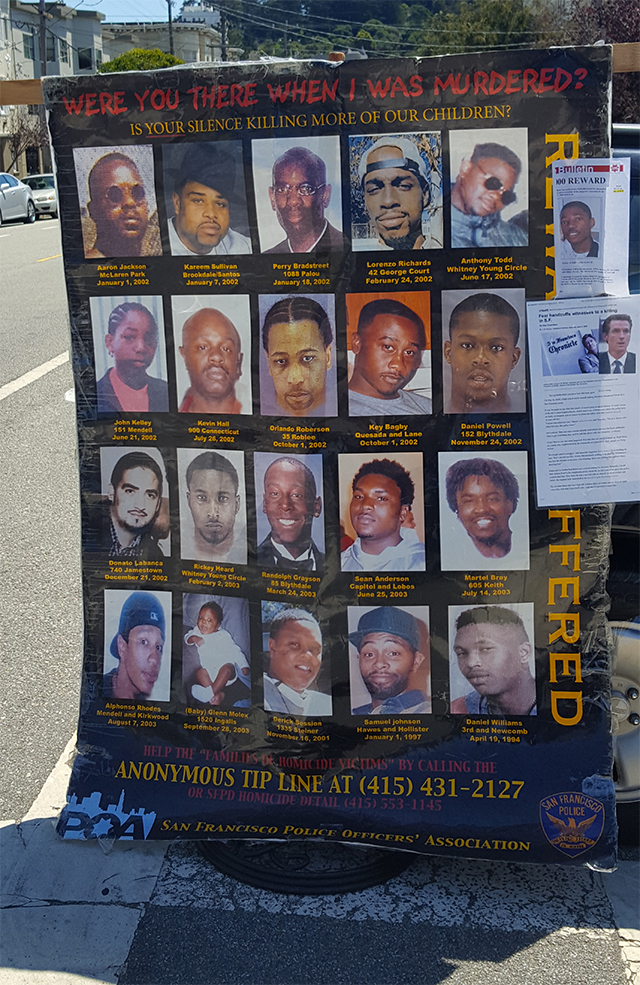 
SFist photo of a 2007 peace walk and vigil marking the first anniversary of Abrakasa's killing.

The jumbo 747 that was originally intended to make it to Burning Man last year, is now, actually, slowly making its way from Mojave in Southern California to the Black Rock desert in