Outside Lands, est. 2008, returns to Golden Gate Park this weekend to delight and slightly overwhelm locals and visitors alike. Between the art, the artists, the DJs, the food stalls, the food trucks, the booze tents... well, you get the idea. In my experience, heading to the festival is a little bit like going to the grocery store: Don't go in without a checklist, and if you can help it, don't head in hungry, either. Here's a stab at the checklist part: You take care of a snack before. 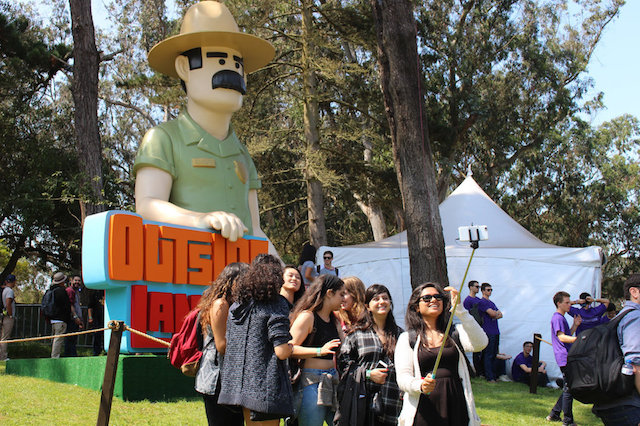 Coachella this is not. Dressing in your festival best for Outside Lands is a uniquely San Franciscan challenge, one with which your friends up for the weekend from LA might not be familiar. As the mantra goes: Bring layers. The forecast for the weekend looks typically foggy and cool in the evenings, same as all this week with daytime sun, with Sunday possibly being the warmest in mid-afternoon, by a couple of degrees. A sweater, jacket, and hat will all come in handy.

In a somewhat odd, somewhat last-minute request, Outside Lands officials have asked that festival goers limit backpacks, mostly for security reasons. That won't happen, but perhaps you might consider sharing a backpack between friends? There are also Paypal-sponsored Lockers to rent: They're $30 for medium and $40 for large, so split one between a few people, perhaps.

Here's the official list of what you can and can't bring. A note on the sun: Depending on your pallor, you can easily get a burn through that fog, and the sun will peek out from time to time, so bring sunscreen. I advised against this last year and got a burn myself... it was karmic.

And finally, a word on fashions — have fun and don't wear a headdress unless you can claim Native American heritage. I can't believe this still needs to be said, and I am positive that saying it will have a negligible effect, but there it is anyway. 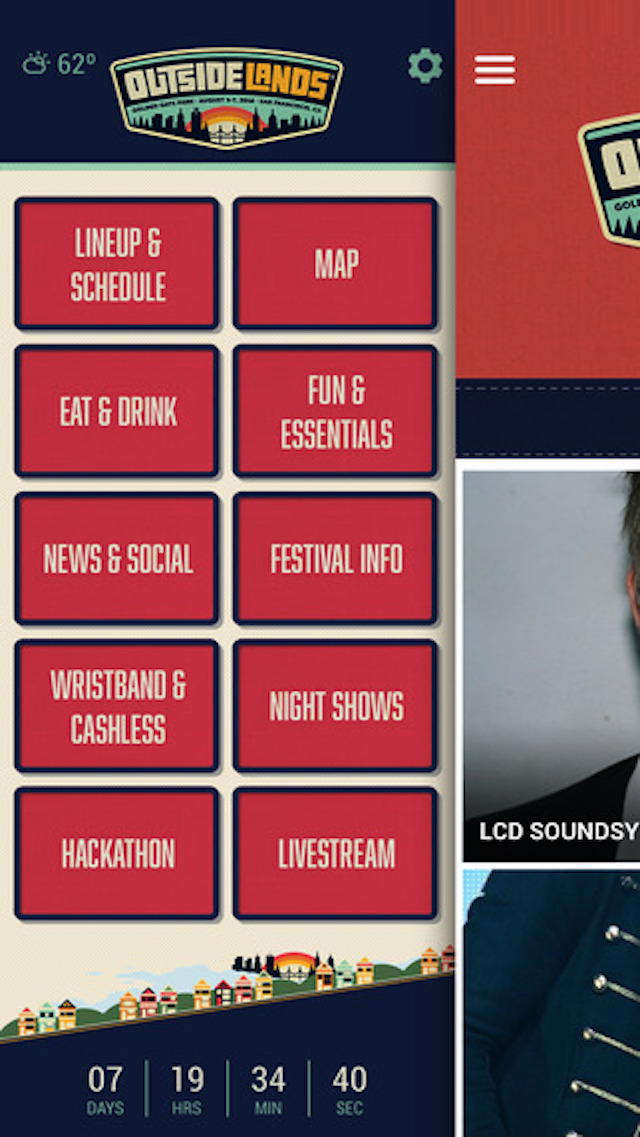 Once a novelty, festival apps are now de rigeur and pretty useful. In particular, the Outside Lands app is a good way to keep track of artists you plan to see, alerting you when they're headed to the stage. Here's the iPhone link and the Android link for the app. 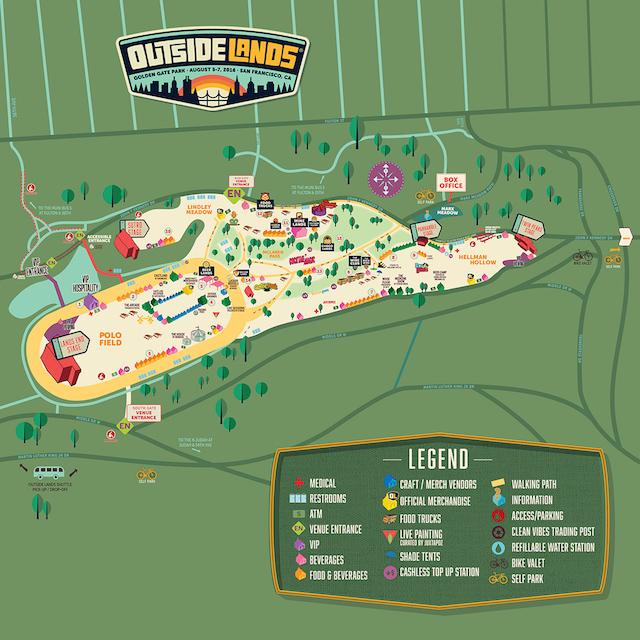 Figure out the lay of the land?

You just got a text that says "come to Sutro stage ASAP!" That is a stress-inducing text if you don't know where Sutro stage is, and it doesn't matter how well you know the park... it's just not a traditional park landmark. Get to know the map in advance, if you have time: The easiest verison to look at is on the app, but you can also download a larger version of the map here. The better a sense you have of the somewhat sprawling stages and areas before you get to the festival, the more time you'll have to relax and enjoy.

Were you completely familiar with every fine print name on the 3-day schedule? Nor was I. For a good preview of some of the non-headliner acts, check out this guide from SF SOUNDS. Not to miss, they say, are the likes of Kamasi Washington (for modern jazz) and Anderson .Paak (for smooth raps and vocals). Above: A pretty solid Spotify playlist to get you pumped up.

Lionel Richie or Lana Del Ray? When Hillary Rodham Clinton wrote Hard Choices, I suspect this was what she meant. There are tons of conflicting acts, and with friends pulling you every which way, you get to call the shots if you make decisions ahead of time.

You may not have realized when you purchased your expensive festival ticket that you were also paying for a comedy tent with the likes of Fred Armison, John Mulaney, and Natasha Leggero. You were! At the Barbary
you'll find a respite from the very youthful, very energetic crowds, and in their place, nice spot to relax and sit down. Expect long lines for most of the sets, though, and with limited space in there you're advised to arrive at least 40 minutes early if not more if you want to guarantee you get in. 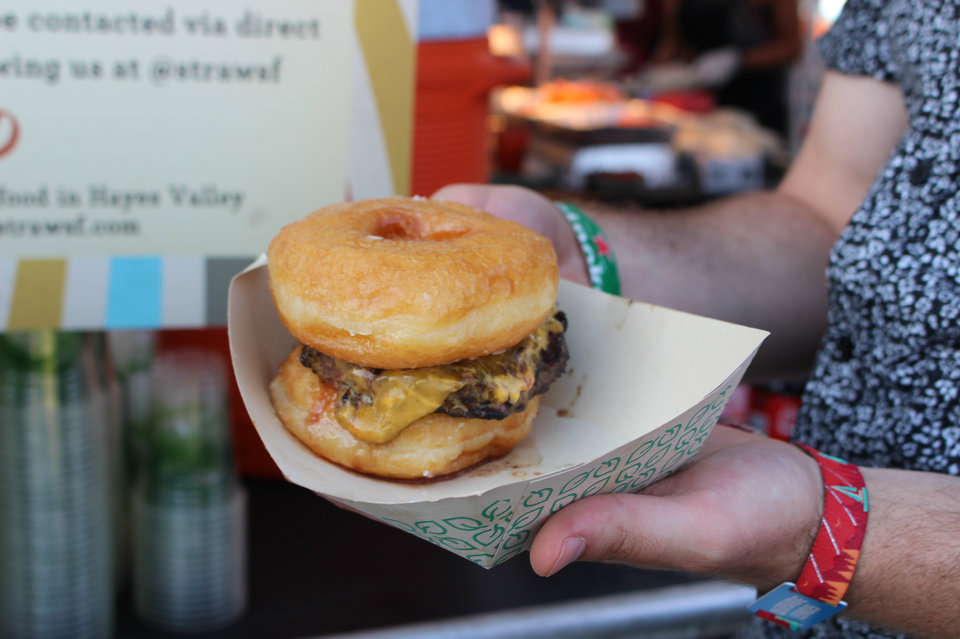 Sraw's doughnut burger is back this year! Photo: Annie Lesser/SFist

Don't get stuck eating another slice from Spicy Pie: This festival, for whatever it's worth, is as much about celebrating food, wine, and local beer as it is about delighting in music, or at least it's as much about keeping people entertained in every sense. Take a look at everything being offered, because it's not every day you can enjoy, for example, Itani Ramen on a foggy day in the park.

On top of that all is the food performance stage, Gastromagic, which you might treat as a fun intermission between main acts. When else are you going to BBQ with Big Boi or dance and eat beignets with Big Freedia?

Finally, festival booze is expensive, but at least at Outside Lands it's top quality: Wine Lands, Beer Lands, and Cocktail Magic put top wineries, breweries, and mixologists in once-a-year proximity.

All good things come to an end, and you'd do well to figure out how and when you plan to leave the park when you must. The bike valet parking is miraculous, in my experience, but hey, you do you.

Festivals can be draining, and for many of you the answer to the question "Where's the after-party at?" will be your bed. But just in case, keep in mind there are official night shows — a bunch of those are sold out, but they're all listed here, including a sweet-sounding Ra Ra Riot show at Rickshaw Stop on Friday night for which tickets still remain.

Google parent company Alphabet is one step closer to realizing its promise of having drones deliver all the dumb stuff you order online right to your doorstep. CNet reports that the company was

—
Did You Pack A Layer?: The Outside Lands 2016 Checklist
Share this