Sex, love, and other mysteries in the city your mother warned you about.

Though he may have programmed dating apps to automatically match with as many women as possible and systematically send them the same series of messages, Sebastian Stadil thinks of himself as a romantic. "That has to do with my French upbringing," he says. "I very much believe in this 'romantic soulmate' kind of thing." Actually, that's the real reason why Stadil sought to date women "at scale," one of many technical phrases he uses in his highly technical approach to courtship.

It's an emphasis that plays to Stadil's strengths. After completing his studies in economics and computer science in France he moved to San Francisco to found cloud computing company Scalr, where he serves as CEO. While Stadil has been met with professional success in the Bay Area — Scalr boasts millions in investments and he now serves on advisory boards at Google and Microsoft — the 31-year-old has been less lucky in love.

Stadil and his girlfriend broke up, which was understandably difficult, but he decided he'd better waste no time in his search."I was determined to find the One, even if it meant swiping right on the whole Bay Area," he writes in a Medium post detailing his experience. "Normal dating was a nightmare, so I hacked it." That meant writing a program for automatic swiping, messaging, and date scheduling on OKCupid, Tinder, and Hinge, creating a kind of cyberspeed dating with up to four dates per day and eventually 150 first dates in four months starting last summer. 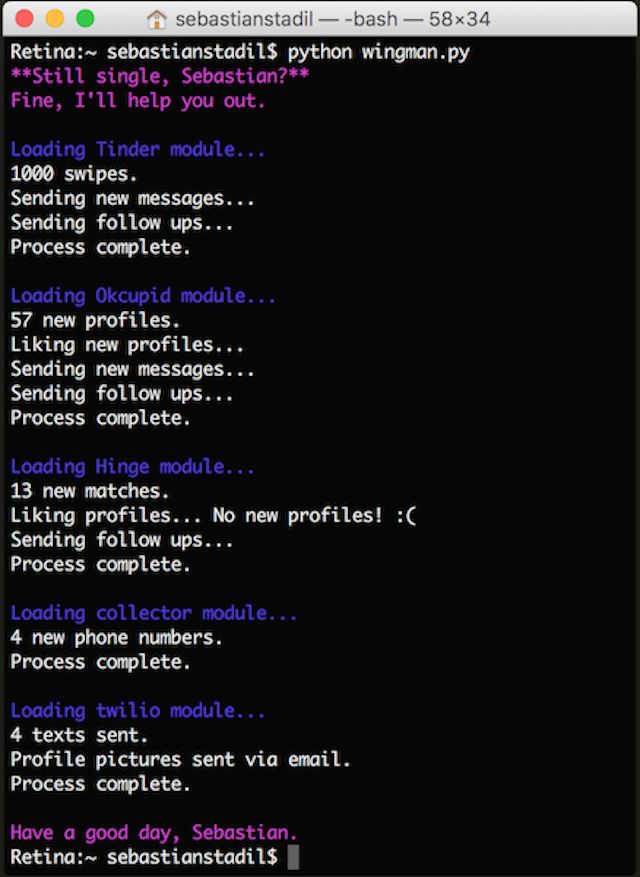 Stadil honed his approach, which he calls "industrialized," over time, testing various photos and messages against controls. "I assumed canned messages wouldn’t work well, but after over 10,000 sent, there wasn’t a significant response rate difference between personalized and generic messages," he writes. That led to the following series of messages, deployed in order until he got a 'yes' or no response at all.

Of course, tea and pastries (incidentally, Stadil found via his data that a "warm" cup of tea was not as tempting as a "nice" cup of it) aren't awfully expensive. But in the end, at scale, costs added up. Stadil also invested in paid premium versions of Tinder and OKCupid to maximize his reach — as power-users of Tinder, for example, know, a limited number of "likes" are offered for free. "The thesis behind the decision there," Stadil tells me, "is if I'm going to spend $20 per date for tea, for two, maybe some cookies to go with it, if every date costs $20, then the $20 that it costs you to get infinite swipes, that just makes the whole process a lot more efficient." Stadil also refused to split costs on dates. "I could feel the reaction that you re not supposed to split the bill on the first date," he told me, "that the norm is the guy pays on the first date." Stadil also selected date spots that were near his office, often summoning Ubers for his dates to bring them to him. "I can't really afford to take an Uber and then cross the city and then have a one-hour date and then Uber back to work. That would take two hours of my time. It was just much more time efficient, and gentlemanly, for me to order up an Uber for her," he argues. All told — Ubers, tea, and premium subscriptions  the endeavor cost Stadil about $6,000.

While bringing dates to him made more time to have more of them, that wasn't always easy, Stadil tells me: "There were times when I had three to four dates a day, and those were kind of painful because you end up drinking a ton of coffee or a ton of tea, and that just sucks. Usually what I would do is two, three coffee drinks a day and then drink dates in the evening." That aspect of Stadil's speed-dating appears to exhibit a double-standard. While dating cuts both ways — each party investing time and effort in the search and in each date — Stadil seems to have valued his time more highly than his dates'. In the end, that predictably led to difficulty for him. Even if, as Stadil puts it in business parlance, he was able to "convert" a first date into a second one, he might forget details of their original date. "It gets tricky, because you end up telling your story three times a week, and you get a little awkward, repeating stories." After learning that a woman was an orphan on date one, he made the mistake of asking her about her parents on date two. "That was an awkward moment," he writes in his Medium post. "If you're reading this, I apologize."

Stadil also betrays a double standard when it comes to control in dating. "In my sample of 150, not once did a girl take the initiative, pick a place, and invite me." he writes. "I’m told it’s fear of appearing desperate, but fuck that! Own your life, don’t let someone drive it for you." Of course, Stadil automatically sent messages first, and he also told me he "hated" the dating app Bumble, a highly popular option where women must message men first. "It gives all the control to the women. I'm not a passive guy: I take action, I like to control my life," he said.

Stadil is, on the whole, a self-effacing and well-intentioned person, both in his post and, fairly clearly, in his life. For example, he's amusing and self-deprecating when it comes to his appearance. "I’m a fat, bald, short guy whose only quality is that he isn’t an ax murderer." His most successful profile picture hid his flaws, he told me, chuckling. Even if his methods are unorthodox, it's easy to root for him, and in the end to feel disappointed along with him when he says he "failed" in love. "Dating is like enterprise sales," he writes, I think sort of heartbreakingly. "When your customer goes for a competing, more compelling product, you’re never told and you don’t get any feedback."

There was one glimmer of hope in all this: A Google employee whom Stadil refers to as Jane. "She was fun," he writes. "I had a special feeling so I brought her on a special date at Golden Gate Park. I brought a basket with fruits, macaroons and red wine and rented a boat. We took turns, and she rowed with the vigor of a thousand Vikings. At some point, we got lost and I used this opportunity to steal a magical first kiss. That was my best first date on more than 150, ironically the only one that hadn’t been part of my rigid routine."

Not only was Stadil more successful by devoting time and thought to someone he was interested in rather than abiding by his usual rote system. He was successful in part because he was honest, telling Jane about his program: "She just laughed and said that was ingenius and pretty smart," he recalled to me. After five fun dates, the two parted ways.

Stadil was less forthcoming, though, with his other dates. That made me question his choice to publish his story under his own name, revealing to women he'd met that they had, as he writes, "participated involuntarily in this experiment." Stadil does thank them for that participation, and he did leave some time between the dating spree before publishing his story. "I met smart girls, pretty girls, fun girls, and weird girls and it was great even though in the end, I didn’t find my soulmate." Did Stadil, I had to wonder, have any of his own questions about the ethics of his project?

Not really. "Coming from France, where dating is one at a time, and moving to San Francisco where people are dating four five or six people at a time, that ethical change was kind of already made," he says. "I didn't invent it, I just decided to take that a little bit further." In that vein, I might argue that plenty of people use standard greetings with online dating matches or swipe blindly to see who they might match with or even repeat the same date regimen with different people. Whether or not it's the most rewarding and promising way to go about dating is another matter.

Though none of Stadil's dates seem to have been the wiser, save Jane, some of his friends learned of the effort. "Once in a while, with a friend, we had a conversation, and they would start complaining about how repetitive [dating] was, they would say 'oh I tried building [a program to help],' and I would say, well, I have one too... I'm not the only one who has built this pre-built automation, a surprising number of my software engineering friends [have done so.]"

That said, Stadil won't share his program with them or anyone for that matter: "If you are to give this to other people, if other people were to use this, I would be arming my competition," he tells me. He also doesn't want to give it away willy-nilly for a reason he discovered over the course of his dates. Here's a Facebook post from him:

In hindsight, Stadil doesn't think his tactic was ideal. "I think I would have been more successful if I had spent that time going to a dance class or going to a yoga class, and not being on the dating apps, and being in social places." Couldn't he do both, I asked? No, he says, for him it's a binary. "I have fairly limited time so I had to choose one or the other."

Still, he ends his Medium post on a hopeful, if exhausted, note. "I'm running out of steam. It is a very time-, resource-, and attention-consuming thing. The whole point of automating was precisely to make it not so. It’s time for another approach. A drastic change. But not tonight. Tonight, I have a date."

Actually, he tells me, he hasn't been dating much. "I kind of sometimes start the app again and get a few dates that way, but I'm mostly focused on my company," Stadil says." The other strategy I'm contemplating is just choosing a market, a different market. For example, my friends that are in New York are doing somewhat similar things, and there there is a higher ratio of women to men, which skews the supply and demand equilibrium."

In the end, Stadil wonders whether he might attract a partner in revealing his quest. "Who knows, perhaps I’ll find my special someone through this post?" he writes. Hear that, ladies? Feel free to reach out with a message, automated or otherwise.

With traffic in the Bay Area so notoriously bad these days, isn't it about time someone do something about it? That seems to be the thought of the Metropolitan Transportation Commission, anyway, as

A new trend in sustainable brewing that I hadn't heard about: turning wastewater, or gray water, into beer. The Bay Area's Half Moon Bay Brewing already tried this trick last fall, in an