It had been quite the grand European tour for Candace Low. In late June, with a six-week jaunt across the continent wrapping up in Portugal, the biologist from San Francisco visited a remote area of a popular tourist region called the Algarve. The Algarve is full of hotels, but Low was in a coastal region called Aljezur. Much of the area is undeveloped  it's a national park  so Low found a place to stay via Airbnb, which has hundreds of listings in the area, some for as little as $21 a night.

She'd already had one less-than-stellar stay in a home rented via Airbnb: In May, early on in her trip, she found a room in a flat in Stockholm, where Low ended up hiding while her host, Ida, engaged in verbal and physical abuse with her teenage daughter while her two other daughters cried and wailed. (Ida also tried to charge her an extra 95 euro for using the fridge.)

And her three-night stay in Aljezur's Costa Vicentina  at a work-in-progress casa, with a 4-and-half-star rating  got off to a rough start. After arriving late on the first night, Low and her host, Samantha, never got along. "She did not like me from the moment I arrived and proceeded to make my stay uncomfortable," Low later told Airbnb in an email.

Relations were icy, if workable, but on the third night, June 22  when Samantha organized a party for the other guests, a couple who are Airbnb hosts in Spain, and some volunteer workers at the property  things fell apart.

Low says Samantha turned her nose up at the wine she'd brought. Then Samantha told Low  the biologist  that she didn't believe in science. Then she started mocking Low for being from California.

Finally, after Samantha had had a few glasses of wine and a joint, an argument broke out over getting more money in order for Low to use her kitchen, and Samantha asked Low to leave  offering her her money back if she did.

That's when Low says she whipped out her smartphone and started filming. (Indeed, there's a video of an intoxicated woman asking the filmer to "Get out of my house.") The worst of it never made it on camera. Low says Samantha grabbed her and latched onto her arm so hard it left bruises. It took "two men" to separate the pair. Low gathered her things and left, crashing in the spare room of another partygoer who also left after things broke up.

Another partygoer told Low she should call the police, but with only WiFi access on her phone (she had no international SIM card) and without much hope it would do any good, Low decided to see what Airbnb could do instead.

She contacted the company's customer support through the app on her phone that same day, on June 23. At the very least, she wanted a refund.

The first customer service rep recommended "reaching out to your Host, as they're often in a position to work this out quickly."

"I hope you'll handle this because I will not talk to her again," Low wrote. "There are bruises on my arm from her grabbing me. I was nothing but polite and friendly to her, and there's something really off about her. I will give you the contact information for the other guests if you'd like to talk to them."

After Low sent a second customer service rep, a "Case Manager with Airbnb Trip Experience," video of the encounter as well as a detailed description, Airbnb sprang into action.

"You're absolutely right that this is an unacceptable way for Hosts to behave, especially towards their Guests," wrote the case manager, who refunded her for the stay, told her that other Airbnb staffers would be "investigating" Samantha's behavior and "addressing it promplty." She also gave Low a $100 "travel credit" for future Airbnb stays.

"I sincerely hope that the refund and Travel Credit help to counterbalance that negativity," she wrote.

It hasn't. After a few weeks of trading emails with Airbnb, "I'm more annoyed than before," Low told SFist.

On July 7, a third Airbnb customer service rep reached out to "resolve" the situation. 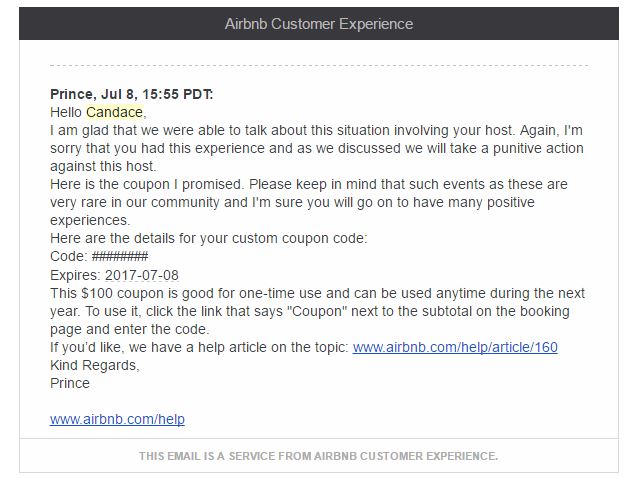 Low was looking for some sort of action to be taken against the host, whose ill behavior Airbnb seemed to acknowledge. Airbnb promised to look into it, but told her that they couldn't ban an unruly host. Low was perplexed.

"You say there is going to be punitive action against Samantha but you can't ban her from Airbnb... but then, it just seems like you are waiting for something more serious to potentially happen," Low wrote via email. "Samantha was pretty mental and really uncertain on what her triggers were. Same goes for Ida Kriisa at my Stockholm room, whom I heard screaming at and hitting her 19-yr old daughter and throwing things, with 2 other young children screaming their heads off."

"Things happen," she wrote the company, "but when you knowingly allow mentally and emotionally unstable hosts to continue offering rooms, then that's just putting guests at risk."

(A fourth customer service rep did eventually offer her a $250 hotel voucher  but only if she'd found a hotel that same night after leaving Samantha's and managed to check in.)

The episode illustrates the options available to Airbnb guests who find themselves in a difficult situation  which is to say, flee, and see what happens later. And this is actually a far less upsetting story than the one from last year in which a 19-year-old man was held hostage and sexually assaulted by his Airbnb host in Madrid.

On the company's website, Airbnb recommends guests try to work out a situation with their hosts. If that doesn't work, the guests are encouraged to leave the listing, contact Airbnb, and see what the company can do, be it cover that night's hotel stay or find an alternate listing.

If the situation is really dire, Airbnb says guests should flee harder  and call the police. Then, after that, guests can call the company's 24-7 hotline to resolve whatever issue is plaguing them.

But what do you do if you're in a situation  abroad, or in a rural part of Sonoma County  where phones don't work?

Airbnb also says that guests can use any other means of electronic communication to resolve an ongoing accommodation issue  like Facebook or Twitter. Though if you're in the middle of nowhere with no cell service, tweeting in the dark might feel like... well, tweeting in the dark.

For her part, Low says she was unaware of the 24-7 hotline until SFist mentioned it.

"I kept getting taken back to a set of FAQ's when there are problems and typically led back to something like, "Let you[r] host know to discuss the issue," she wrote via email to SFist. "Also, it was the middle of the night and didn't have a phone I could use to call the US from where I was."

When asked to comment on Low's situation, an Airbnb spokesperson offered this statement:

The safety of the Airbnb community is the single most important thing we work on every day. More than 80 million guest arrivals have had safe, positive experiences on Airbnb and negative incidents are extremely rare. We have a zero tolerance policy for violence, we are investigating this incident, and we will take action if need be.

A month later, the listing is still up  still with 4.5 stars. A negative review that Airbnb asked Low to write was somehow removed, with an automated review appearing in its place saying the host canceled the reservation the day before the scheduled arrival, to which Samantha responded "This woman is from another planet from US."*

(Disclosure: I'm a frequent Airbnb user and sometimes host  registered with the city, thank you very much  who has only once had an untoward experience at an Airbnb stay, which also happened to be in a foreign country in the middle of nowhere. My solution: feign exhaustion, retire to my room, get up early and get the fuck out of dodge. Passivity is activity, kids.)

Airbnb says that hosts do go through a background check of sorts that is intended to weed out sex offenders, felons, and various "serious misdemeanor" offenders. Thus far, those claims have yet to be tested in the same way Uber has been. (Then again, what's the wisdom of banning a would-be host with a nonviolent "criminal" record who's paid his or her debt to society?)

Low thinks the company is inclined towards hosts at the expense of guests. After all, if hosts have a tough time listing their homes on Airbnb, Airbnb wouldn't have a business model.

"They don't seem to take much accountability for the safety of their guests," Low said. "In the end, maybe that's what I'm mostly ticked off about."

* This story has been corrected to show that Low did write a review on the site that does not appear on this host's page, for reasons that are unclear.

Former mayors of San Francisco Dianne Feinstien, Frank Jordan, Willie Brown, and Gavin Newsom have joined forces in opposition to the creation of a new position that might sap the powers of the

—
What Do You Do When Your Airbnb Host Freaks Out On You (In Another Country)?
Share this