And perhaps most importantly, the bathrooms got a remodel, and aren't quite so bare bones.

@centralkitchen finally has an amazing bathroom. Opening the doors this Thursday.

As chef Thomas McNaughton said in announcing the revamp, "It has always been our goal to be an accessible, neighborhood restaurant," and the changes reflect a move toward slightly lower price points, and smaller portions that allow for more of a small-plates, communal dining experience.

He tells Eater, "The old menu was so constrictive. The way I approached the new menu was us sitting down and saying, ‘What do we want to eat?’"

To that end, there are now five pastas  thanks in part to a new pasta cooker in the renovated kitchen  a selection of a half dozen snack items and seven vegetable plates like escarole with egg, bresaola, and chanterelle mushroom vinaigrette; and fresh shelling beans with grilled tomato and nasturtium.

Also, the biggest and priciest menu item is a $79 bone-in ribeye steak for two, marking one of the most expensive cuts of meat in town.

This is just the opening menu, and you can expect things to change on a weekly or even daily basis  expect a whole fried rock cod to make an appearance at some point, and for vegetables to get swapped in and out based on availability. 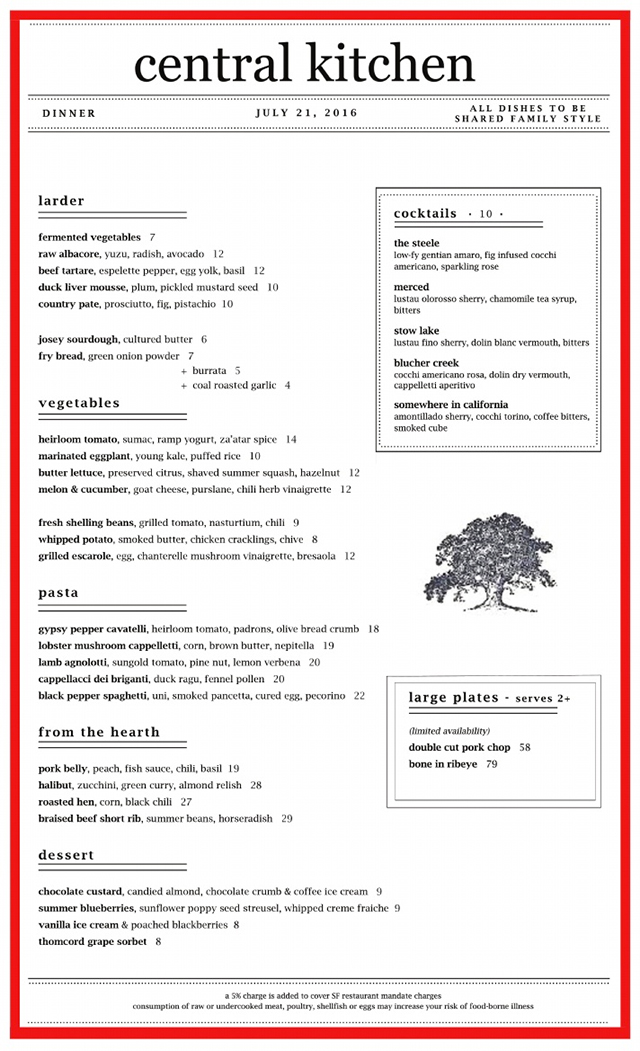 Bookstores may be becoming things of the past in many parts of the world, but San Francisco is still home to a bevy of wonderful, stalwart neighborhood bookshops that are quietly thriving and

By Chris Roberts It had been quite the grand European tour for Candace Low. In late June, with a six-week jaunt across the continent wrapping up in Portugal, the biologist from San Francisco

—
Behold The New Menu At Central Kitchen, Version 2.0
Share this