Have you been yet to the rad new ping-pong-themed bar, SPiN, partly owned by Susan Sarandon, that opened in May at Folsom and Third? Well, next Thursday, July 21, could be a good opportunity not only to check it out but to watch some professionals go at it as the six-member US Olympic table tennis team arrives in SF for a fundraiser, and for practice before they head off to compete in Rio.

As CBS 5 reports, the team includes a 15-year-old boy from the Bay Area, Kanak Jha of Milpitas, who will be among the youngest competitors participating in this year's Summer Olympics. And Milpitas appears to be a hotbed of table tennis talent: Two more members of the team, Jiaqi Zheng and Lily Zhang, are also from Milpitas. Who knew?

Though she says she regrets not being able to be in SF for the event next week, Sarandon said in a statement, "I am very excited that SPiN San Francisco will be hosting our 2016 Olympic table tennis team for this great event. I am sure that everyone will be amazed by these great athletes that will representing the United States at the 2016 Olympic Games."

According to an official posting about the fundraiser:

The evening will feature exhibitions from both the Men’s and Women’s teams, along with opportunities for attendees to play some pong and interact with the Olympians. 2016 marks the first time that the US has qualified both Men’s and Women’s teams for an Olympic Games. 2016 marks the first time in the history of USATT that both a men’s and women’s team have qualified for the Olympics in the same year.

Says Gordon Kaye, CEO of USA Table Tennis, "I would like to thank Susan Sarandon and the team at SPiN for providing our Olympians with this incredible opportunity. I think it’s amazing that our teams, and the San Francisco table tennis community, have the chance to get together to honor their accomplishments and have some fun as they get ready to leave for Rio." 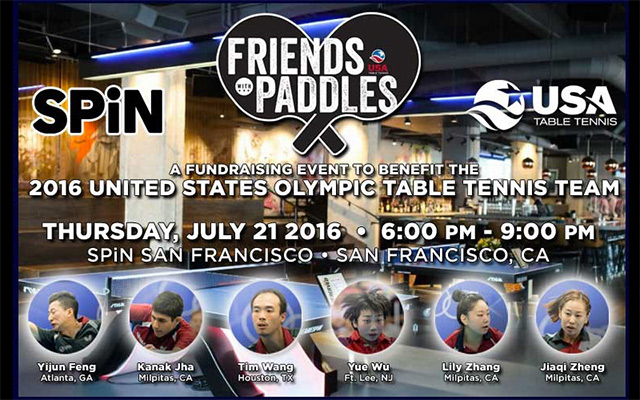 The event, which goes from 6 to 9 p.m. next Thursday, isn't for the masses though  there's a minimum $75 donation at the door. You can purchase advance tickets here, and there are also sponsorship opportunities that will get you a private table with one of the Olympians.

A spot loved by locals and tourist alike underwent some changes today, as sections of the road surrounding Twin Peaks were made the exclusive domain of cyclists and pedestrians. The SFMTA plan to

San Francisco has some of the greatest scenery in the world, but this week much of the city has ignored that scenery and glued its collective noses to smartphones to play Pokémon Go.