It's a funny idea, a company seeking to decrease the usability of one of its most popular product's features. But that appears to be exactly what Apple is attempting to do to its iPhone, with a patent filing for an infrared system that will allow as-yet-unspecified third parties to disable the ubiquitous cell phone's camera.

A website called Patently Apple first reported the news of the patent filing, described as "Infrared Signals to Block Concert Recording." Saying that "Infrared Transmitters Could One Day be on Stages to Prevent Illegal Image Capturing," the filing suggests that use of an infrared signal could be used to temporarily disable an iPhone camera, to "prevent you from taking pictures with your iPhone at places where it might be inappropriate or prohibited," TechInsider writes.

Per the patent, which you can read in full here: 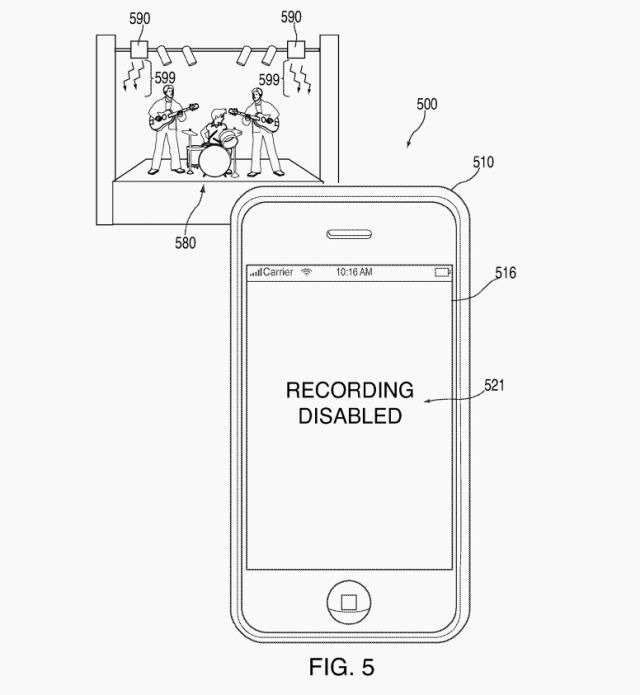 While this is presented as a way to limit photography at places like movie theaters, concerts and museums, if you're like me you immediately thought "oh, man, I'll bet the cops would LOVE this." No more of that pesky video of misconduct by, well, anyone who shouldn't be misconducting if you have one of these as-yet-undeveloped emitters. Not only is Big Brother watching you, but he's looking for ways to make sure you aren't watching him back. Right?

Perhaps! Though the blocking feature wouldn't be all-encompassing -- as Tech Insider writes, "infrared is directional, meaning the receiver (your smartphone camera) needs a direct line of sight with the emitter (venue)," so you'd only be blocked when you were pointing your camera directly at the thing that "shouldn't" be photographed -- Danny O’Brien of the Electronic Frontier Foundation tells CBS 5 that we should all be worried about the possible applications of this tech.

“It’s very disturbing when someone proposes technology that would take the power out of the owner or user and hand it to a third party,” O’Brien says.

From the patent filing alone, it's unclear to whom this camera-blocking power would be granted, another reason O'Brien and others are uncomfortable with the idea. As Quartz writes, "the patent also raises questions about the sort of power that this technology would be handing over to people with more nefarious intentions. Its application might help police limit smartphone filming of acts of brutality, or help a government shut off filming in certain locations." SFist's efforts to reach Apple for answers to these questions was unsuccessful at publication time.

That said, it's not time to go burn down the Ministry of Truth, at least, not quite yet. As TechInsider notes, "companies like Apple produce tons of patents all the time," but "very few of them actually make it into real-life products," and Quartz hopefully writes that "it’s possible that Apple just patented the technology so that no one else will use it." But, you know, this might be a good reason to hang on to that camera you were considering dumping because you basically only take photos with your phone these days. Call me a hoarder, call me a doublethinker, just don't call me incapable of taking pictures of officials engaging in sketchy behavior.

For the sixth straight year, Outside Lands has sold out, this time ahead of the July timeframe when all the VIP and general admission tickets generally disappear  and this shouldn't be a surprise

Caleb Pershan/SFist Kitty-corner to an actual corner store, Food Hall (3100 16th Street) has all the sodas and booze and snacks of a typical "bodega" or "convenience store." But it's the presentation,