Back in simpler times, there weren't so many hills in San Francisco, or so city archivist emeritus Gladys Hansen recalls. "At the very beginning, San Francisco was a very small city and we had only seven hills," she told the Chronicle in 2004, which were "copied from the seven hills of Rome." Members of the original club are Telegraph Hill, Nob Hill, Russian Hill, Rincon Hill, Mount Sutro, Twin Peaks, and Mount Davidson. As the city expanded over time, new hills were named and built up. Others were erased by development. Irish Hill, for instance, once in the vicinity of Potrero Hill, was essentially leveled.

Today it seems no one can agree on how to count our peaks, and therefore on the total number we possess. For example: Should we include Maintop Hill on the Farallon Islands? Technically they're part of San Francisco! Progressives tally 48 Hills, SF State's literary magazine has long been called 14 Hills, but still others think the number far greater.

Honestly, who cares! While the sheer number and variety of our hills has come to define everything from San Francisco's climate to its transportation, not all hills are created equal. Some have nicer trails, or better views, or pleasanter perches. This list, then, is an attempt to bring the total number of hills way down. These are the ten that matter. The ten to watch. The ten that stand out.

Surely we've missed your favorite, secret hill — how forgetful of us — but you will no doubt point this out in the comments without revealing which it is. Nice.


Bernal Heights
Formerly known by such names as "Nanny Goat Hill" (grazing animals) and "Red Hill" (anti-war protests), Bernal Hill is the namesake of San Francisco's Bernal Heights neighborhood. Bernal itself stands at a respectable 433 ft high, but more impressive than its height are its long spine and its spacious park. Inside, colorful chert and thin layers of shale contrast with grasses (straw colored half the year, green the other). A central road takes you up to the top, which is somewhat unfortunately topped with a radio tower, and plenty of trails can lead you down and around. Expect off leash dogs, further elevating Bernal into the top ten. 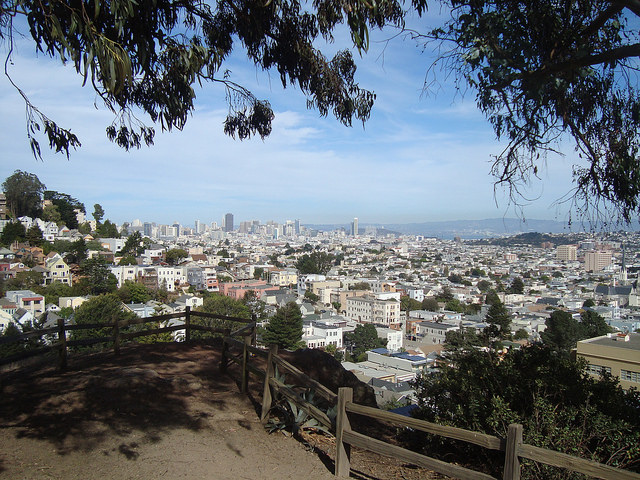 Billy Goat Hill
Sitting on the rim of Noe Valley, this is the one with the swing you've seen on Instagram, although that wasn't there when I last checked. Arrive at the tiny network of trails (0.2 miles lol) by either 30th Street/Laidley Street or Beacon Street. According to SF Rec and Parks, it's got the highest diversity of bee species in the city, its steep slope blooming with native wildflowers. 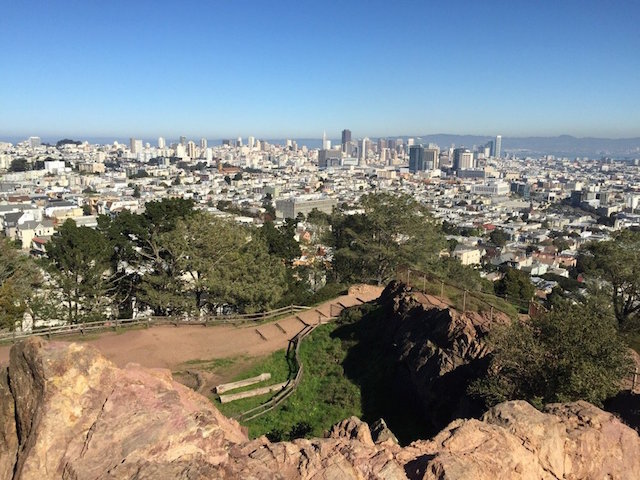 Corona Heights
In a difficult contest with its neighbor, taller, more verdant Buena Vista Park, Corona Heights and its bald, so-called "Pride Rock" have an edge. Check out that terra cotta red bedrock! Corona Heights is also the only SF hill that's home to a museum: That's the Randall Museum, an excellent resource for children and child-like adults to learn about the natural world. At Corona Heights, look out for: Cute dogs, California poppy, poison oak. 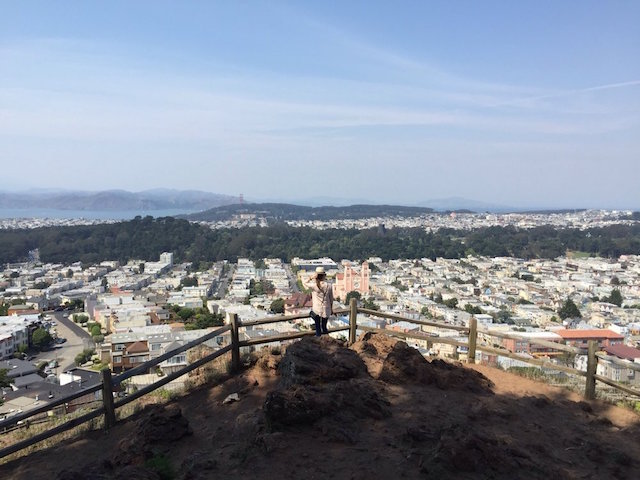 Grand View Park
Marvel at the grandeur of the Pacific atop the Inner Sunset's contribution to this list, Grand View Park, also known, sometimes, as Larsen Peak or Turtle Hill. Approach via the lovely 16th Avenue Tiled Steps, then come the rest of the way up the 666 feet via one of two staircases, one concrete, the other wooden. From the tippy-top, take in all of Golden Gate Park in a beautiful panoramic view. Please stay on the paths as windblown sand from ocean beach which built up part of the habitat is eroding and is not replenished due to development.

Kite Hill
An oasis in the Castro near the Seward Street Slides, this small open space off 19th Street provides a perfect urban refuge. There are just 2.87 acres to explore at Kite Hill, so stop for a quick breather or lounge among native grasses. The winds are, as you might expect, kite worthy — frequent but not overpowering — and, hidden away as it is, you might just find you've got Kite Hill all to yourself. 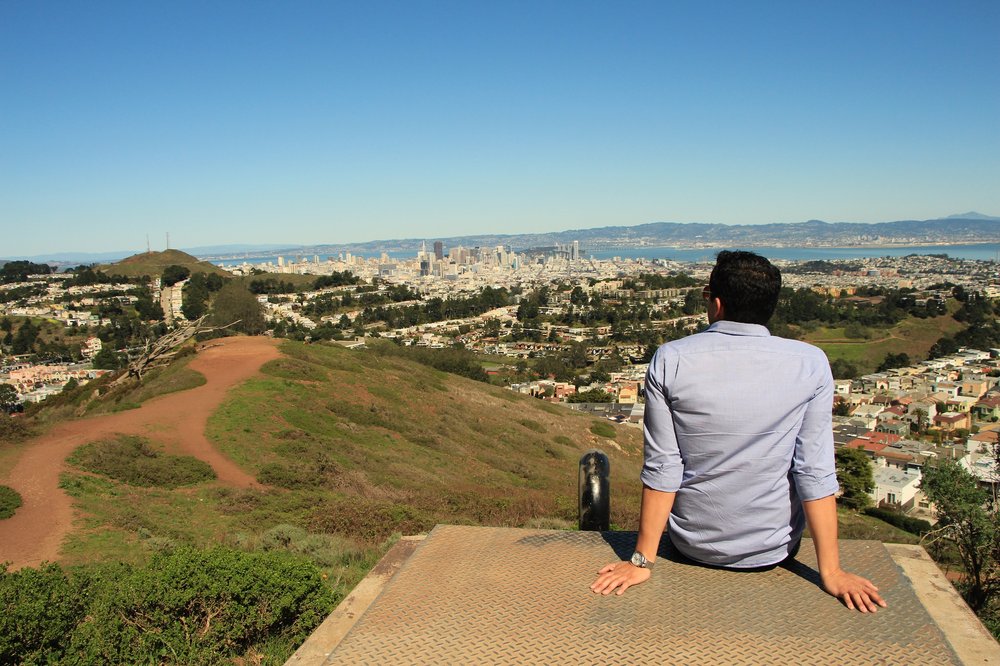 Mount Davidson
Mount Davidson is San Francisco's tallest peak at 938 feet tall, and that's not even counting the 103-foot concrete cross built in 1934 and sold, in 1997, to the Council of Armenian American Organizations of Northern California as a monument for the 1915 Armenian genocide. Say what you will about that thing, but if it's good enough for a shot in Dirty Harry, it's good enough for me. Mount Davidson was once called Blue Mountain for its springtime blooms, but renamed in 1911 after surveyor George Davidson at the behest of the Sierra Club. Adolph Sutro, who once owned much of the land, recruited children to plant trees like Blue gem eucalyptus, not out of the goodness of his heart or due to his love for forests, but instead because of a law that gave tax-free status to forested lands in city limits. 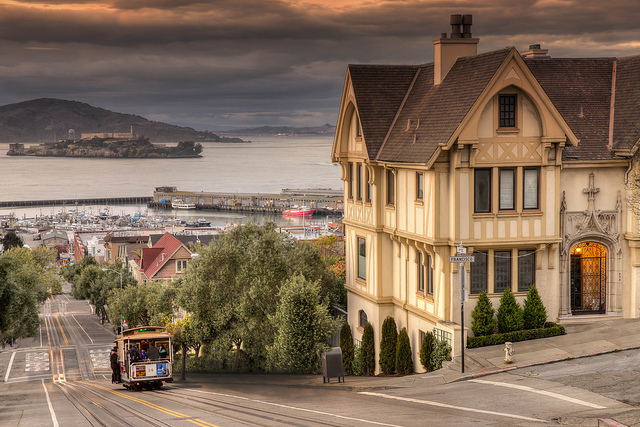 Russian Hill
Maybe it was clearer what, exactly, bounded Russian Hill when it was a Gold Rush era Russian cemetery. Now it's harder to say. Certainly Lombard Street's crooked section is one defining aspect of it, and the area is further worthy of iconic SF status thanks to the Hyde Street cable car. When in the area, don't miss Fay Park, a tiny green spot with terraces and two latticed wooden gazebos at Chestnut and Leavenworth. 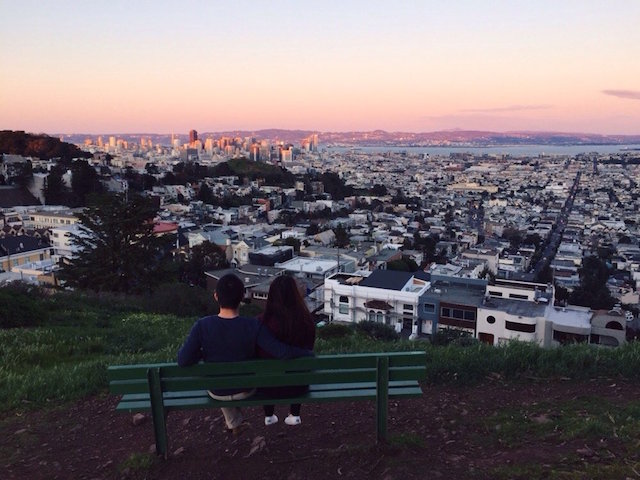 Tank Hill
This one is so-named for the Clarendon Heights Water Tank that once sat atop it, pumping water from Laguna Honda. However, the tank was removed in 1957 according to SF Rec and Parks — all the better, because housing was rejected up there and the city eventually bought (back) the hill once the Open Space fund got going in the '70s. Now its free and clear, save for an excellent, very high bench. A word of warning: Some of the side trails are eroded on Tank Hill. Do be careful. Ascend via a stairway at Twin Peaks and Clarendon or by the Belgrave Street Entrance. 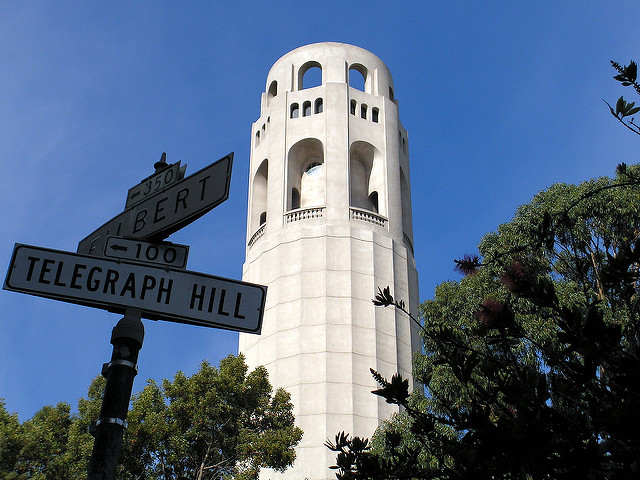 Telegraph Hill
Telegraph Hill wears Coit tower proudly like a crown. But before that, and providing the hill its name, was a semaphore: A windmill-like thingamajig built in 1849 to signal to ships entering the Bay. Enjoy Telegraph Hill, truly a gem, for its Filbert Street steps, its excellent views, and its hordes of goddamn squawking parrots. 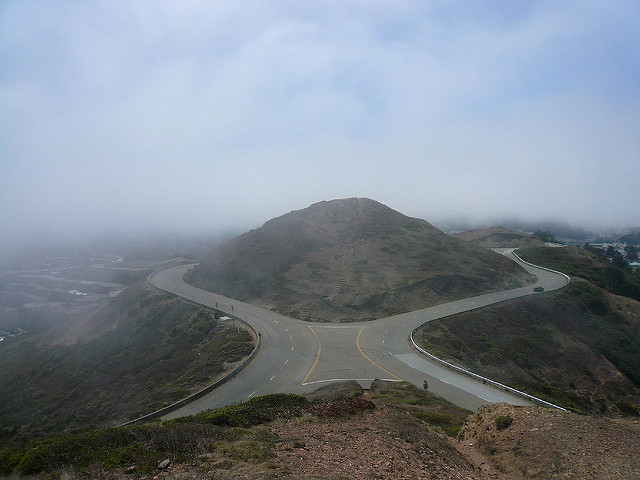 Twin Peaks
Second to Mount Davidson only in Height, Twin Peaks was once called Los Pechos de la Chola” (Breasts of the Maiden) by some cheeky Spanish settlers. Sure, it attracts a preponderance of tourists, but if you want to see San Francisco with fresh eyes — looking right down Market Street and maybe catching sight of a Mission Blue Butterfly — then it can't be recommended highly enough. While built around the car, cyclists love the gradual climb, and its a fun run or walk up, too. Billy Goat Hill. Photo: MK30 via Flickr

One experienced Burning Man temple construction crew, led by artist Dan Sullivan, is working on a monumental project for the playa this year called Catacomb of Veils. Currently under construction on Pier 70

The 16-year-old boy accused in the assault and murder last July of 8-year-old Madyson "Maddy" Middleton made a brief appearance in court Tuesday morning to enter a not-guilty plea. As KRON 4 reports,