Riding a bicycle in San Francisco is a liberating experience. Not subject to the vagaries of surge pricing, the patchwork of our city's public transit, or even the speed of one's own gait, the simple act of cycling redefines your relationship with SF. Geographies shrink as what was a 45 min walk becomes a 15 min bike ride, and, simultaneously, all that pedaling does wonders for your glutes — it's a win win. And yet. Despite all of this, riding a bike around these 7x7 miles can often be a fraught experience. All it takes is almost getting doored once, and the corresponding adrenaline spike, to realize that it's not all sunshine, lollipops and rainbows. But the constant threat of near death isn't the only thing raining on the cycling parade, as the constant drumbeat of criticism regarding bikers' "reckless nature" gives those on two wheels a bad name. So, here with SFist's definitive guide on how to ride a bike, we hope to put to rest all the questions of what is and is not acceptable behavior. Let's get to it.

Your Bike
To ride a bike, you first need a bike to ride. Unless you're going the bike share route (which, with a huge expansion planned, is a smart move), that means buying one. If you're planning on mainly commuting and bar hopping on the thing, resist the urge to blow your annual bonus on some carbon-fiber fanciness — you'll just look like an asshole and the bike will likely get stolen anyway. Instead, check out your local bike shop and take plenty of test rides before making your decision. The mechanics at most shops are super helpful, and are happy to find a bike that works for you. If those prices are too high, look to Craigslist. However, like buying anything on Craigslist, be extra cautious about sketchy sellers and potentially stolen bikes. And definitely don't buy one from a random person off the street, as it's likely the product of a chop shop.

To Helmet Or Not To Helmet?
Now that you have your bike (and U-Lock), it's time to decide on whether or not you need a helmet. While there's no legal requirement to wear a helmet if you're over 18, based on eight years of anecdotal commuting experience it appears that a majority of people do. However, it's totally a personal decision, and if a pedestrian, driver, or fellow cyclist tries to shame your helmet-less head it's absolutely fine to politely tell that person to buzz off. Likewise, if you wear a helmet, it's not your duty to lecture those who don't.

Bike Lanes
Bike lanes are great, but they're also deceptively dangerous. At any minute, a car door can swing open turning your glorious bike lane into an instant dead end. Also, with cars merging in and out of the bike lane with seemingly no knowledge of the law, it is often hard for a cyclist to know if riding in a bike lane is more dangerous than taking the entire lane. Well, lucky for you! Taking the entire lane is not only perfectly legal, but totally acceptable behavior. Seriously, it's not rude to be riding in the middle of a lane.

Salmoning
Salmoning refers to riding against the flow of traffic, and while it's a lot easier to get away with on a bike than in a car, you should never do it. It's illegal, dangerous (for you and other cyclists), and just a plain dick move. Don't do it. 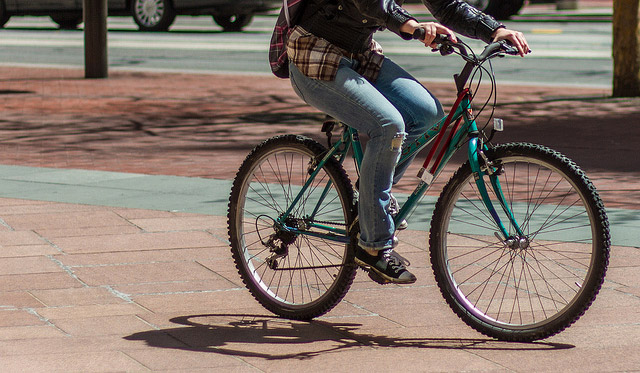 Riding On Sidewalks
If you're over the age of 13 it's totally illegal to ride on the sidewalk. In additional to making every pedestrian you scare hate cyclists for life, when you decide to bike on the sidewalk you're highlighting yourself as a target for police. SFPD loves to stop and search cyclists riding on the sidewalk, and as this is SF, those searches frequently turn up drugs. As a police officer long ago advised me, "Don't do something illegal while you're doing something illegal." Stick to the streets.

Passing Cars (And Other Cyclists)
In theory, this one is easy: Pass on the left. This only becomes hard in practice when cars don't merge into the bike lane before turning (as they're legally required to do), or when drivers who don't know the law get upset with your two-wheeled ability to pass them. Regardless of this nonsense, you should always pass cars on the left. The same goes for other cyclists — pass them on the left, and be communicative while doing so. It's not rude to holler "on your left" at someone as you ride by. In fact, not only is it polite, it's safe! I once swerved left to avoid a car pulling out in front of me only to body check a silently passing cyclist on my left. Communication is key.

Idaho Stops
While still illegal, if cars can have their California Stops, cyclists can have their Idaho Stops. The Idaho Stop, of course, is when a cyclist treats a stop sign like a yield sign — yielding to pedestrians (as you do all the time when on a bike) or cars with the right of way, but otherwise not coming to a full and complete stop before proceeding through the intersection. Doing so isn't an inconvenience to drivers (it actually keeps traffic flowing), and may in fact be safer than the current alternative.

Yelling At Cars and Pedestrians
Yelling at cars and pedestrians is not only acceptable behavior by cyclists, but sometimes can be an absolute must when done for reasons of safety. People on bikes don't have loud horns, and with some exceptions (think bells) a scream is the only thing that will prevent a pedestrian from blindly stepping into the bike lane in front of you or a car from merging straight into your tiny body. But, and here's the key thing, there's no reason to be a jerk about it. Instead of yelling insults, a succinct "watch out" or even a "hey" will do the trick. However, don't yell at pedestrians in crosswalks — it makes you look like a dick, and as mentioned above, they have the right of way anyway, always. Also, keep any and all confrontations to words — don't ever physically hit a car (or person!) or reach into a car window for any reason. Especially with tempers flaring, if something goes down (and you either are unwilling or unable to leave the situation) your best bet is to call the police and start recording with a cell phone.

Related: Etiquette Week: How To Ride A Muni Bus

This person should not be biking on the sidewalk. That is a serious offense. Photo: Bhautik Joshi

Gizmodo's been blowing the door open on Facebook's increasingly influential Trending news area, in which topics popular at any given moment on the network are shown, typically the top three of them anyway,

I can't get enough of this video, which is actually a week old now but just surfaced in my Facebook feed, of circus performer Christian Stoinev making a halftime appearance during the NBA

—
Etiquette Week: How To Ride A Bike In San Francisco
Share this