Have we reached peak app in this our pretty clearly bubbly tech economy of 2016? Some people are still going to tell you no, but I'm here to tell you, and them, about Nookzy. A friend of a friend got a piece of their direct mail marketing on her doorstep, which you can see below, and it appears that the app wants to facilitate the process of letting people rent their backyards, rooftops, and hot tubs by the hour. Because share everything we must!

Yeah the idea is that people get to share private spaces, or "nooks," so that the gorgeous little corners of our gorgeous city do not lay empty. Because why should you have a lovely garden behind your house that you barely use when there are some Millennials with disposable cash who would like to be sitting there having beers right now?

Per the site copy:

Our goal is to make the city more multifaceted and interesting by opening it up for people to use. Much of the city goes unused most of the time, and much of the city's potential never gets tapped into. We believe that even the smallest, humblest corners of the metropolis have an incredible potential to be a source of abundance. By directing attention to the many spaces of the city, our hope is to transform these spaces and their visitors. Our platform allows respectful visitors to enjoy the urban nooks that previously had been unavailable to them, while simultaneously improving the spaces themselves. From little greenhouses to saunas to hot tubs to garden alcoves, Nookzy hosts some of the most stunning and delightful spaces, bookable by the hour.

Also, the page about becoming a "nook" host suggests that, unlike Airbnb, they're actually going to send a rep from the company out to assess your "nook" and even joozh it up a bit, design-wise, as necessary. And it seems geared toward outdoor spaces, but not limited to those, so there could be some inviting people to use your basement billiard room I guess? The Nookzy team also says that they lend out inflatable hot tubs and saunas, too, if you have the space to host them. 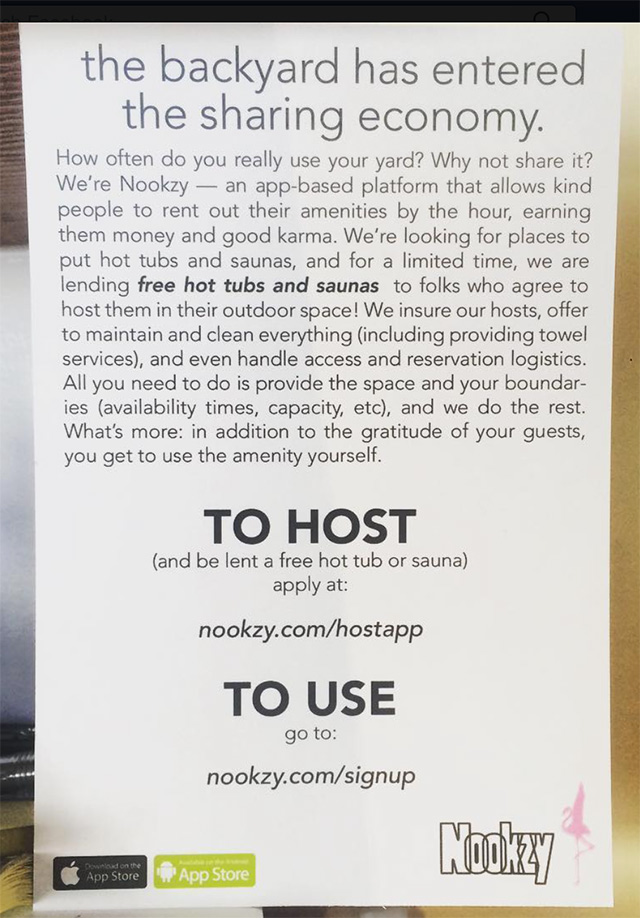 The app, meanwhile, doesn't appear to be searchable yet in Apple's app store, but you can get the host-side app by signing up here.

Co-founder Eric Rogers wrote this piece on Medium about the concept back in February, talking about how he and some friends have created "episodes" in under-utilized urban spaces, like a pop-up lounge they threw together in the middle of some shipping containers, and invited 100 friends to come hang. He harkens back to The Situationists of 1960's Paris, calling it "an unfurling spatial experiment in which we create unexpected, designed moments in pockets and nooks scattered around the city." 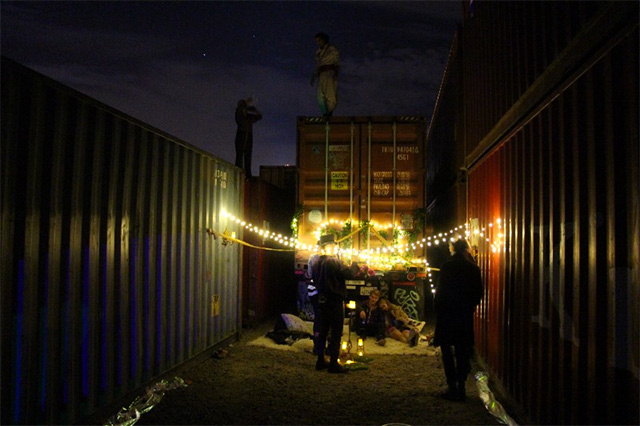 It is, to be sure, an idealistic concept and perhaps a niche that some think needs filling. But I would guess that there are far more people willing to borrow a backyard or stink up a hot tub for a few bucks than there are owners of backyards or hot tubs eager to invite strangers to use them. And if you rent, prepare to find out that your neighbors and/or landlord really don't appreciate you doing this.

As for throwing pop-up parties in random urban spaces, that sounds amazing. But get back to me with a business plan for that.

Previously: The On-Demand/Shut-In Economy Is Definitely Slowing Down, If Not Dying

From the party among shipping containers in an undisclosed location in SF. Via Medium

Driving while stoned could soon become a much trickier proposition if one California state lawmaker has his way. Republican Sen. Bob Huff of San Dimas (insert Bill and Ted's Excellent Adventure joke) yesterday

It's here. The first of 775 new train cars has arrived in the Bay Area. #BetterBART #FleetOfTheFuture pic.twitter.com/a6AjoqusIT— SFBART (@SFBART) April 6, 2016 After a thankfully uneventful journey across these

—
New App Wants To Be The Airbnb For Hot Tubs, Backyards
Share this