The extraordinarily broad reach of Uber across the nation (and world) and their questionable process for screening and hiring drivers has a lot of people worried about what the next shoe to drop will be. So it was with some anxiety and no shortage of creep factor that we heard of some possibly very high numbers of reports of rape and sexual assault in Uber's customer service ticket database earlier this month  a fact which BuzzFeed first reported on and revised after the company quickly rebutted the numbers and attempted to explain why screenshots of searches appeared to show numbers that were not grounded in real complaint cases. The story now takes on an added level of weirdness as BuzzFeed reports that one former customer service employee based in Portland received an at-home visit from an "investigator from California" working on behalf of Uber, who allegedly came to her apartment to question and intimidate her  and, the woman claims, entered her apartment illegally though she told him he was not welcome.

Morgan Richardson, who used to work for Uber in Portland, says she had already been contacted by Uber's legal and security and law enforcement director just before the original article appeared, on March 4. He questioned her about leaking screenshots of rape and sexual assault searches in the company's Zendesk customer support software, and proceeded to contact her again after the article published on March 6  Uber was informed of the leaked screenshots, apparently, on March 3  demanding she hand over any information she had and disclose to whom she had given it.

Uber is taking the stance that Richardson, or possibly another employee or employees, were leaking private information about customers (even though the screenshots had all names redacted), saying they are "unsurprisingly concerned that sensitive, personal and confidential data has been shared with people outside Uber." The official Uber statement adds, "We believe that any company in a similar situation would do exactly the same."

But would any company really send private investigators around to knock on former employees' doors at 7:30 a.m. and say things like, "Do I scare you?" and "This is not going to go away, you know"?

That's what Richardson is alleging, via an attorney, in a cease and desist letter shared with BuzzFeed and dated March 29. Further, she says, the visit from the strange man on March 25 included him knocking on her door loudly for five minutes, pressing his ear to her door, and looking inside her mailbox before she ultimately opened the door. Also she claims the man illegally trespassed in her apartment after she'd already refused to let him in. She says he stepped into her apartment while she was going to look for a pen.

SFist reached out to Uber about how many current or former employees they might be similarly investigating, and they would not answer that on the record.

All that the company would say is that the investigator who visited Ms. Richardson is "a seasoned, older gentleman in his 70s and at no time did he enter her home, attempt to intimidate her or even notice a mailbox." They also say, "The investigator knocked once and the conversation lasted two minutes." This of course is his version of the story versus hers.

They say the investigation is ongoing, and clarify that Ms. Richardson was a contract employee. "We strongly believe that have an obligation to look into situations like this where sensitive information is shared  and we always do," the company says. "Any customer service contractor who shared this type of information publicly violated multiple policies  both with Uber and the third party employing them."

Per BuzzFeed's revised post on the matter, while the original screenshot showed 5,827 support tickets showing the keyword "rape", Uber says they have only received five claims of rape and "'fewer than' 170 claims of sexual assault directly related to an Uber ride as inbound tickets to its customer service database between December 2012 and August 2015." Also, while there appeared to be 6,160 results for "sexual assault" and 382 results for "sexually assaulted," these may not all pertain to actually verified complaints.

Also, an unknown number of these tickets could pertain to nonconsensual sexual contact by a passenger inflicted upon a driver  customer support has escalation measures for various kinds of these situations as well, as screenshots like the one below show. 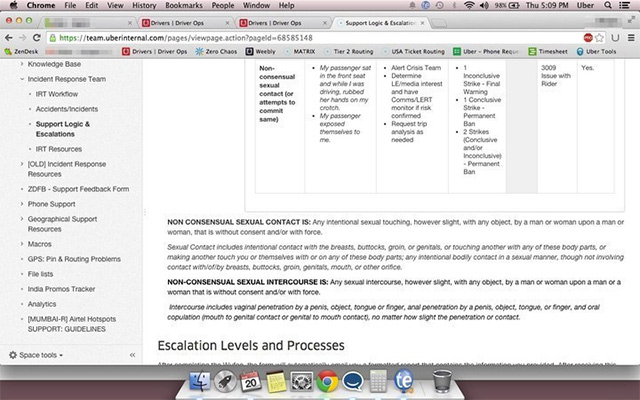 They conclude, "The sheer quantity of these tickets makes it difficult to tell which ones are exaggerations or attempts at false escalations and which are legitimate and urgent requests."

This of course follows on BuzzFeed's 2014 reports of Uber exec Emil Michael claiming to have spent $1 million on "opposition researchers" to dig up dirt on and discredit a journalist who was similarly making claims regarding sexual assault risks and Uber drivers.

As the June election approaches, so does the time of election mailings, campaign fliers, and voter information packets. All that stuff appearing in your mailbox (or hanging from your door) can be infuriating,