The stretch of Highway 3 that runs through the NorCal idyll of Trinity County gets about 1000 cars a day...but those 1000 had to seek an alternate route this week, when the pavement "disintegrated" Monday, leaving a Hollywood-looking fault in the middle of the road.

Caltrans spokesperson Denise Yergenson told the Chron that the last few days of storms were more than the road could take, and the rain-soaked soil beneath the pavement couldn't keep it together. Earlier reports of "shifting and cracks" in the highway meant that Caltrans crews were already on scene, she says, when the street finally gave up the ghost. No injuries were reported in the collapse.

About five miles of the highway between Weaverville and Yreka remains closed as of Wednesday. According to the Sacramento Bee, there's no estimate on when it might reopen. 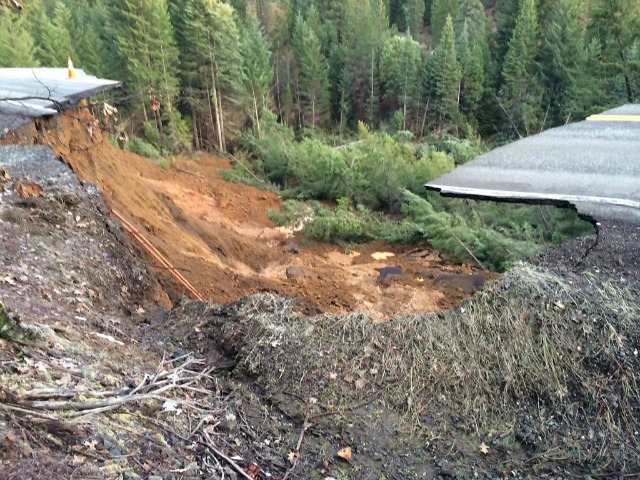 Highway 3 near Weaverville is closed this week, after the storms caused the road to disintegrate. Photo: Caltrans

"We don't know why he ran," officer Sean Wilkenfeld, a California Highway Patrol spokesperson, told the Contra Costa Times, referring to a Newark man and recent Uber driver who led officers on a