To celebrate their progress and also remind us that this Transbay Transit Center thing is really happening, Darin Cook, a senior associate principal with designers Pelli Clarke Pelli Architect, led the big reveal yesterday. For a crowd of VIPs including House Minority Leader Nancy Pelosi, he and his team showcased a hunk of what will be the building's perforated metal skin.

The metal covering, an alternative to glass, comes at a savings of $17 million. That can't hurt: The project' phase one price tag has ballooned to $2 billion, according to the Chronicle, and of course there's some confusion as to who, exactly, is financing phase two.

"This is a single panel. The next step will be to fabricate and connect 18 of them," the architect announced. "This will give us a chance to look at every detail before the fabricators go hog wild.” 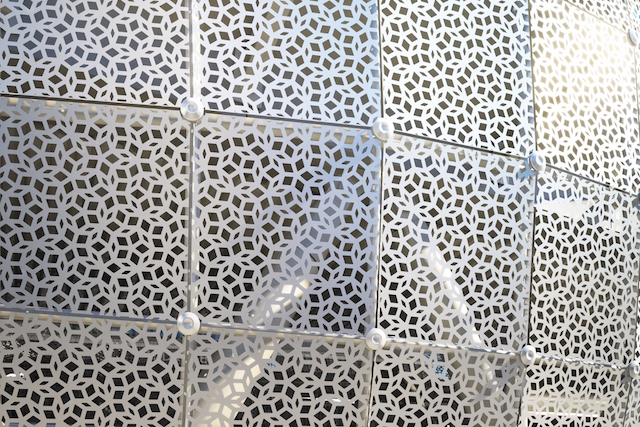 Penrose Rhombus Tiling, the continuous pattern on the 6-by-6 panel displayed above, was discovered in 1974 by Oxford mathematical physicist Roger Penrose. Its holes, like those on paper snowflakes, will allow light to shine into the transit center — a hub of eleven transportation systems from buses to rails — when it opens late next year.

Previously: Checking Back In On The Transbay Transit Center, And Its Shiny Metal 'Skin'

In a frightening update to the unsolved case of the serial rapist assaulting college-age women near the UC Berkeley Campus, police now say that the suspect likely lives close to the site of

Remember the heady days of mid-2014 when a Northern California man named Jeremy Meeks, arrested in Stockton on firearms charges and reputed to be a member of the Northside Gangster Crips in that