Fusion, The Daily Dot, other reputable Internet content engines and paranoid liberal Twitter users everywhere have begun to suspect that Cruz may be responsible for the slew of killings that rocked Northern California in the '60s and '70s.

During a murderous rampage that ranged from Lake Beryessa to San Francisco's 7-by-7, "The Zodiac Killer" or "Zodiac" even contacted local Bay Area media outlets in order to take gloating credit for many deaths, leaving cryptic clues as to his identity. That has never been properly ascertained, leading Google searchers to wonder if "Ted" could indeed be "Zodiac."

The thoughts and theories are wide ranging and highly convincing in their scope. So, as you would choosing a candidate for your vote: You decide.

#CPAC Alert: Ted Cruz is speaking!! His speech is titled: 'This Is The Zodiac Speaking'

Wow, this #ZodiacTed thing is crazy. Kind of hard to deny. pic.twitter.com/ugS8TJFBiS

Is Ted Cruz the Zodiac Killer? from Sergio Andres Lobo-Navia on Vimeo.

As goes the solution to the Zodiac's 408-symbol cipher:

"I LIKE KILLING PEOPLE BECAUSE IT IS SO MUCH FUN IT IS MORE FUN THAN..."

"KILLING WILD GAME IN THE FORREST BECAUSE MAN IS THE MOST DANGEROUE ANAMAL OF ALL TO KILL SOMETHING GIVES ME THE MOST THRILLING EXPERENCE IT IS EVEN BETTER THAN GETTING YOUR ROCKS OFF WITH A GIRL..." 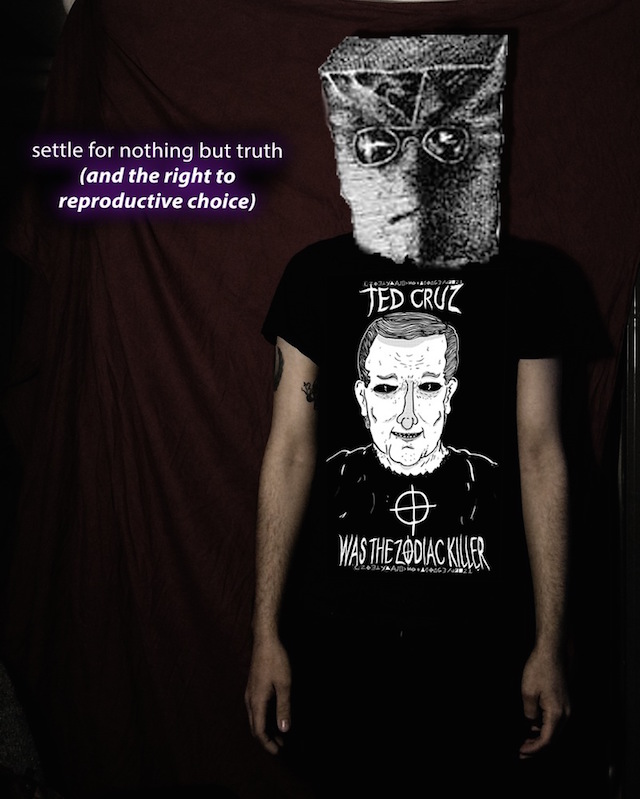 Rampant speculation has even given way to a novel fundraising effort. Proceeds from this unauthorized campaign shirt, designed by Texan Tim Faust and drawn by Rory Blank, go to the El Paso-based abortion fund, the West Fund, as Jezebel reports.

Ed Note: Ted Cruz was born in 1970, leaving theorists to ponder the possibility of time travel in order to justify their claims.

All SFist coverage of the Zodiac Killer

"I am the Jordan and Steph Curry of music, meaning I'm the best of two generations."-Kanye West pic.twitter.com/0wStQmCepA— Bleacher Report (@BleacherReport) February 15, 2016 It's been a rough week