A few weeks ago, via a fascinating archive of historic SF color photos that I'm still not done with, I posted a few photos of a man only identified as a random "oldster" by the photographer, Charles Cushman, who was himself a tourist at the time the photos were taken, in March 1952. The man was walking a pet raccoon on a leash and sitting feeding it grapes atop Telegraph Hill, and apart from being just a funny San Francisco moment captured on Kodachrome, film, it opened up a small neighborhood mystery that I figured could be solved by someone who'd been there long enough to possibly remember this guy.

And, thanks to a tipster and a young reporter at a local elementary school's newspaper, we now have a partial answer.

Reporting on the arguable epidemic of wild raccoons in San Francisco in recent years, and the potential problems they cause  especially for residents walking pets at night  Lina Deng found out some of the story of the man in the Cushman photograph, likely via a family member who'd lived in the area a long time.

Deng was a student at Yick Wo Elementary School at the time of the piece, in 2014, and was likely a 5th grader, writing in the school's paper, hilariously dubbed The New Yick Times.


Did you know that more than 60 years ago, a person named ‘‘Cramer, The Raccoon Man’’ had a raccoon as a pet? He lived at Filbert Street near Grant, just a couple blocks away from Yick Wo. Cramer fed grapes and cherries to his raccoon. He wanted a pet so he got a raccoon. Really weird, but cool. There is a picture of him with his raccoon on a leash at Coit Tower. There are other amazing pictures of “Cramer, The Raccoon Man” online.

So, even though it's just anecdotal history, and we don't know if Cramer (or maybe Kramer?) was the man's first or last name, it's at least confirmed that he was known to neighbors as "The Raccoon Man," and lived on Filbert Street not far from Coit Tower.

It is another example of how Cushman's photos, which span the country and the years between 1938 and his death in 1972, offer documents of lives that may not have been documented anywhere else. 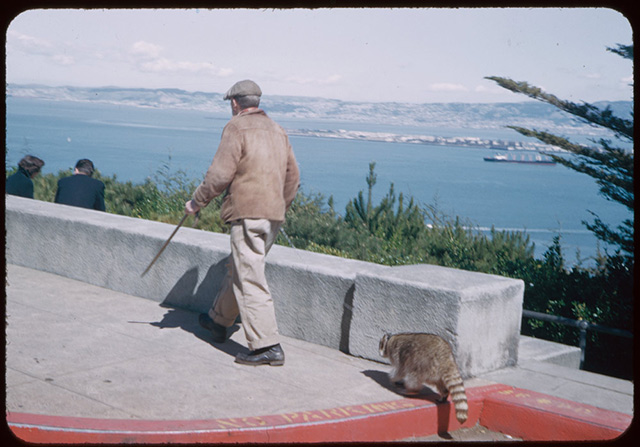 Previously: Who Was This Man With A Pet Raccoon On Telegraph Hill In The 1950's?
Amazing Trove Of Color Photos Show A Brand New Golden Gate Bridge & Scenes From The 1939 World's Fair

A man was shot Monday morning in his own home while attempting to fight off a robber. Details are light, but what we do know is pretty frightening and a bit bizarre. At

You might have seen TechRax run a couple iPhones over with a train or smash an Apple Watch with magnets. But its his stunt from late last week that caught my attention, because